England had stumbled in on someone else’s party and the way that individual effortlessly shaped the script to his own ends certainly took the sheen off what, by most measures, was a beginning of promise for the Gareth Southgate era.

The German press contingent was in a state of agitated anticipation of Lukas Podolski’s emotional substitution when he wound back his left foot and lashed the ball into the top right hand corner of the England net. It was a measure of how the qualities Germany bring to the game offer such uncomplicated and game-changing genius.

For England, what we witnessed was something more solid: a performance of intelligence and creation which provided promise from some of the new names Southgate has turned to. This was the first defeat under his management and the first since that dread night against Iceland in Nice last June but there can be frustration at chances spurned, rather than desolation at the mountain to climb.

With the caveat that the home side were operating well below their maximum intensity, Michael Keane did enough to suggest he can be a regular presence in England’s defence. He is surer in possession and complicates the game less than Manchester City’s John Stones. Jake Livermore also buzzed around the midfield in a way that few thought likely.

The puzzle lies in where Jamie Vardy fits into a team which plays on the floor. He was an isolated figure in a team whose trigger reaction was not to deliver the long ball he wants to seize upon. Harry Kane is more likely to make more out of the Southgate system. 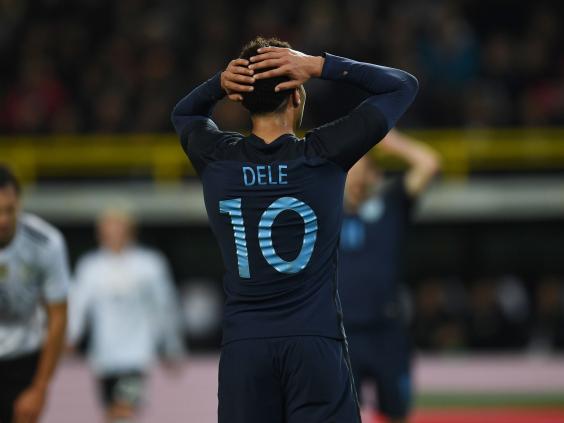 The brave new world of Southgate included the kind of tactical risk which did for one of his more benighted predecessors. He deployed a three-man England defence for the first time since that desperate night of biblical weather in Zagreb’s Stadion Maksimir against Croatia, nine years ago, which brought down the curtain on Steve McClaren’s tenure. This gamble was compounded by the presence of Michael Keane – an England debutante who has been playing in a four-man Burnley defence all season – in the three-man unit.

The German preoccupation was the farewell being extended to Lukas Podolski, in his 130th and last international, so it always felt like a celebration rather than an examination of potential English vulnerability. There was a testimonial atmosphere, though more was the pity that the English contingent offered more of that wretched singing about ’50 German bombers’ which was a soundtrack to last summer’s European Championships.

The image of England out on the field of play was a more modern affair: a side which had the first half’s two outstanding opportunities and demonstrated the kind of confidence, awareness  on the ball and ability to harry which Southgate is looking for. 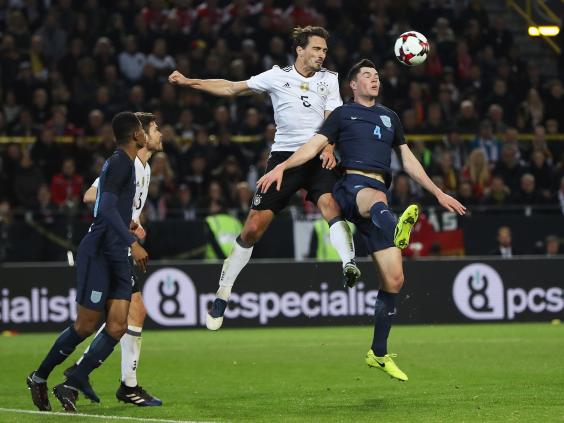 Though Jake Livermore began with confidence in his first international start, the creative threat came from Dele Alli, spinning into the left channel, and above all the bustling figure of Adam Lallana. It was the Liverpool player’s awareness which created the first of the first period’s opportunities when he intercepted Joshua Kimmich’s loose attempted pass to Antonio Rudiger on the half hour, raced through 35 yards and slid a shot against the right post. The decision to shoot rather than level for Jamie Vardy was the correct one, as the Leicester striker had not provided the kind of movement which might have freed him from German attention.

It was Lallana who again made the intercept which had England two-on-two in the German area four minutes before the interval. Vardy teed up Alli whose run into the box went to waste when he fired  straight at Marc-Andre ter Stegen: against opposition of this standard, a miss of criminal proportions. 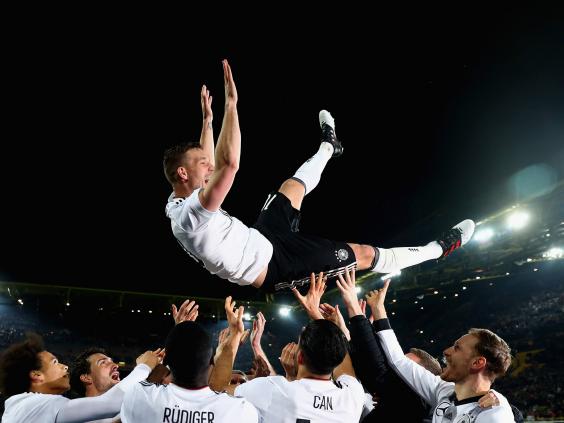 The night belonged to Podolski, who leaves the international stage (Getty)

When it came to building on promising beginnings, England offered no more than occasional cleverness around the edges in the second half and the outcome was not in doubt after Podolski’s 69th minute finish. More of the German wold class commodity began to emerge after that. Joe Hart was called upon to make a fine, one-handed stop when Leroy Sane hit a low, hard shot. The defence was tested more and Keane emerged as the night’s English revelation.

At the end, the stadium awaited Podolski’s lap of honour. As Germany savoured past glories, Southgate continued an assessment of how he might find some in the years ahead. There is cause for hope.