German Chancellor Angela Merkel has said she will consider changes in the law to make it easier to deport migrants who commit crimes after sex attacks on women in Cologne.

The attacks on New Year’s Eve have shocked the country and sparked a debate about Germany’s open-door policy on migrants.

The police’s handling of the events has also been sharply criticised.

The head of the city police force has been suspended from his duties.

Victims described chaos as dozens of sexual assaults and robberies were carried out with little apparent response from the authorities.

Under current German laws, asylum seekers are only forcibly sent back if they have been sentenced to at least three years, and providing their lives are not at risk in their countries of origin.

Officials from Angela Merkel’s conservative Christian Democrat party are expected to propose that migrants jailed for any length of time should face deportation.

“I think there are indications that changes must happen,” Ms Merkel said.

“The interior minister and the justice minister are discussing just what we could improve,” she added.

The party leadership is holding a policy meeting in the city of Mainz on Saturday. 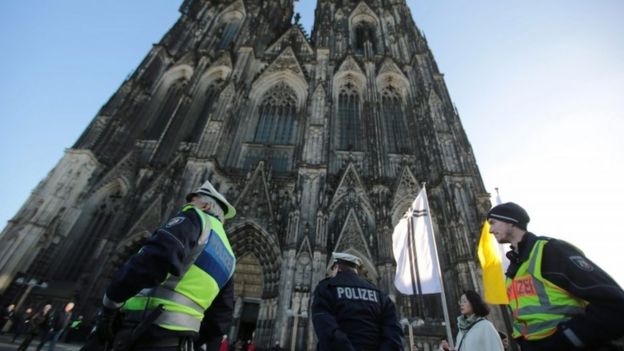 Police have come under fire following the Cologne attacks 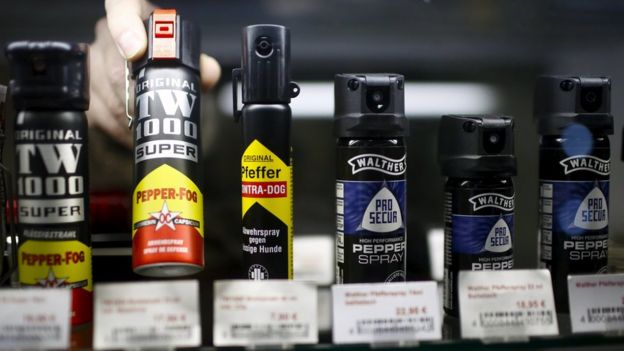 The identification of the attackers in Cologne as North African or Arab in appearance has caused alarm in Germany because of the influx of more than a million migrants and refugees in the past year.

Meanwhile German officials have warned that anti-immigrant groups have been trying to use the attacks to stir up hatred.

Similar attacks to those seen in Cologne were also reported in Hamburg and in Stuttgart.

The anti-immigration Pegida group has said it will hold a demonstration in Cologne on Saturday.

Police are expecting around 1,000 people to gather in front of the city’s main train station, German media reports say.

Debating rules on deporting criminals is a distraction, writes Heribert Prantl in theSueddeutsche Zeitung. The law already provides for the deportation of criminal refugees, he says – the problem is the mistakes made by the police on the night and their inability to enforce the law.

Writing in the Frankfurter Allgemeiner Zeitung, Christian Geyer largely agrees. Whether or not Syrians, Afghans and Iraqis with asylum seeker status were among the perpetrators changes nothing in the debate, he writes. The questions for the police and justice system remain the same.

And while Chancellor Merkel’s asylum policies are controversial, she doesn’t need the help of favourable police reports, he adds.

Chancellor Merkel’s friendly face is gone, writes Philipp Wittrock in Der Spiegel. The chancellor recognised that the events in Cologne had the potential to sow mistrust, divide society, and damage her political standing.

Discomfort in her own party at her welcoming asylum seekers continues to bubble under the surface, he writes.

The search for answers

Federal authorities say they have identified 18 asylum-seekers among 31 suspects linked to the crimes committed.

The suspects include nine Algerians, eight Moroccans, four Syrians, five Iranians, two Germans and one each from Iraq, Serbia and the US.

The state interior minister of North Rhine-Westphalia, Ralf Jaeger said on Friday that he had suspended police chief Wolfgang Albers from his duties.

He has been accused of holding back information about the attacks, in particular about the origin of the suspects.

Separately to the federal investigation focusing on what happened at the station itself, Cologne police are investigating 21 people in connection with the sexual assaults. It is not known how many of these are asylum seekers.

The state police have recorded 170 complaints of crimes, 117 of which involve sexual assault. There were two allegations of rape.

Two men, aged 16 and 23 and apparently of North African origin, arrested overnight on Thursday in connection with the sex attacks, have been released without charge, according to German media.

In this article:Angela Merkel, Cologne attacks