Hamburg, that red-bricked port forever associated with ground beef sandwiches and The Beatles, is a fine prospect in winter. This time of year sees the return of the beer-fuelled Hamburger Dom funfair (on until 4 December), while the Reeperbahn’s (1) cafes and bars spark to life in the dark nights under a neon glow. On 11 January the city’s new cultural landmark, the Elbphilharmonie (2), will officially open to great fanfare as the world’s most expensive concert hall. The final bill after construction ended in October was said to total €860m.

Hamburg is easy to get around. The egg-shaped centre is squeezed between the main rail lines to the east, the Alster lake (3) to the north-east, the gardens (4) that follow the line of the old city walls to the north and west, and the broad River Elbe (5) to the south. The southern part of the city comprises the old docks, magnificently reborn as HafenCity (6).

Begin a morning stroll when it’s quiet and the porticoed shopfronts along the Colonnaden (7) are still thick with shadows. Wander south, past the Alster lake (3), a silvery bowl popular for year-round pleasure boating, before turning right, past the boutiques and renaissance arches of Alsterarkaden (8). The city’s oldest shopping arcade, it is hung with creaky lanterns, gilded fish and tridents. Cross the Reesendamm bridge for views of the Kleine Alster basin, then follow the ghost of empire to the Hamburg Rathaus (9). Once the seat of the Hanseatic League, its classic gingerbread house facade trumps every other city hall across Germany. Outside, it’s awash in baroque splendour; inside its beehive interiors compel you to explore (11am-4pm daily, weekend hours vary; €4). 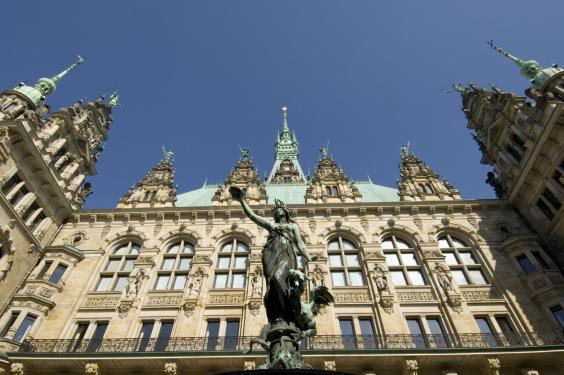 From here, the Rathausmarktplatz cuts west through the Altstadt to a series of deep waterways that fan out from the Alster Canal. You’ll find more of the same as you continue south-west towards the red-brick buildings of Speicherstadt (10), a UNESCO World Heritage Site and the largest warehouse district on earth. It’s framed by the wizard-hat spires of the St-Nikolai Memorial (11)and St Catherine’s Church (12), where Johann Sebastian Bach once pedalled away on the organ (katharinen-hamburg.de; 11am-5pm at weekends, other days vary; free).

In Berlin they swear by currywurst, but in Hamburg locals argue about where to get the crumbliest fish fingers. It’s a winning formula the closer you get to the sea, with grab-and-go sandwich counters lining the wharves from Speicherstadt’s timber-pile foundations to the St Pauli Pier (13). Dinky pitstop and local favourite Brücke 10 (bruecke-10.de; open 10am-10pm daily) serves a variety of buttery herring and salmon buns (from €3), as well as local speciality krabbenbrötchen – North Sea brown shrimps on rye, €9.50. 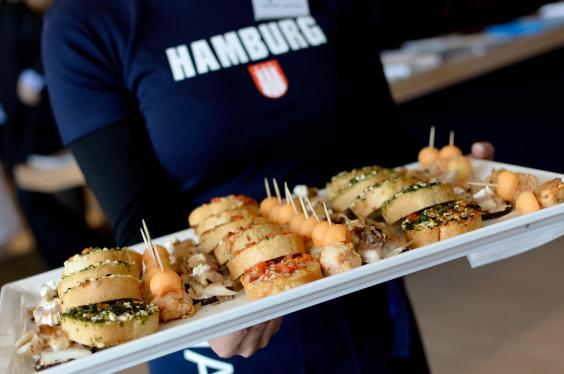 Seafood sandwiches are a speciality of the city’s food markets

Weave through the streets of the St Pauli district from here to Planten ind Blomen (14), the green lung of the city. Its first seeds were planted in 1821 and the garden has dug in its roots to form a parkland belt that curves round the city centre’s midriff. It’s open from 7am to 8pm in winter and until 11pm in summer (plantenunblomen.hamburg.de).

Beat the work-day rush from the park to a 23rd-floor perch at Clouds (15) (clouds-hamburg.de; dishes from €10) atop the Dancing Towers, a pair of wonky skyscrapers designed to look like tangoing lovers. The highest bar in the city, it struts above St Pauli, and has a rooftop party deck one floor up. While nursing a biscuit-brown Krombacher wheat beer (€4.50), you’ll spy the stone-faced Otto von Bismarck monument (16) in Alterelb park below and count more bridges than you’d cross in Amsterdam and Venice combined.

The Gröninger Braukeller (17) (groeninger-hamburg.de; dishes from €9.30) across town clings to beer hall tradition with all the trimmings you’d expect: cellar-aged casks; gigantic copper stills; a naughty anything-goes weekend atmosphere. Besides that, on the oak-stained tables you’ll find mountainous plates of suckling pig and sausages to soak up all those thick-foamed home brew pilsners (€2.40).

Rise early and follow the cry of gulls to the ornately-domed Fish Market on Grosse Elbstrasse (18) (fischauktionshalle.com). It’s only open on Sundays (5am to 9.30am, 6am in winter), but don’t expect it to be quiet. It’s also the time when pie-eyed stragglers from the clubs in the nearby Reeperbahn red-light district (19) find themselves sobering up in wait for the shutters to roll open for breakfast. Order a fresh fish sandwich or quarkballchen (doughy cheese bites).

Locals flit between the gallerias and passages of Neuer Wall (20)and Grosse Bleichen (21), a canal-lined rectangle of streets where you can pick up the latest high street fashions cheaper than you ever could at home.

For something more seasonal, amble along the Kunst Meile (22)(kunstmeile-hamburg.de), past the city’s most influential galleries to HafenCity (6) for one of Hamburg’s spectacular Christmas markets (until 30 December; 11am to 10pm at weekends, other days vary). Tradition seeps from the waterfront, where antique boats are festooned with lights and stalls sell bratwursts big enough to sink a ship. 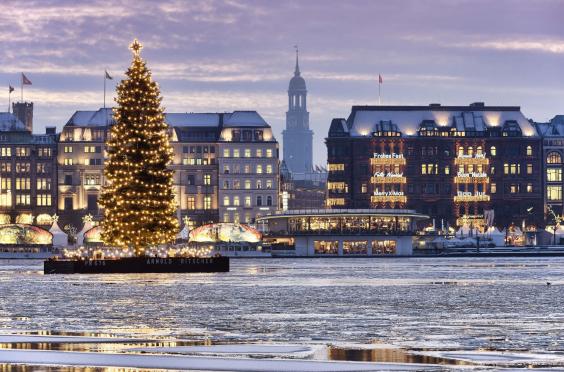 The city gets especially festive for Christmas

At the crossroads of antiquity and modernity, the Elbphilarmonie concert hall (2) (countdown.elbphilharmonie.de) is becoming a hub for harbour regeneration. When it finally opens in January (10 times over-budget and nine years late), the gigantic crest-shaped glass wave will reimagine the dockside quarter as a cultural zone. Until then, it’s possible to listen to electro pioneer Brian Eno’s walk-through sound installation (2pm-8pm, until 4 December; €3). It also houses the Plaza, a viewing gallery from where you can breathe in the salt-tanged maritime history and watch cargo ships shuttle up and down the Elbe. 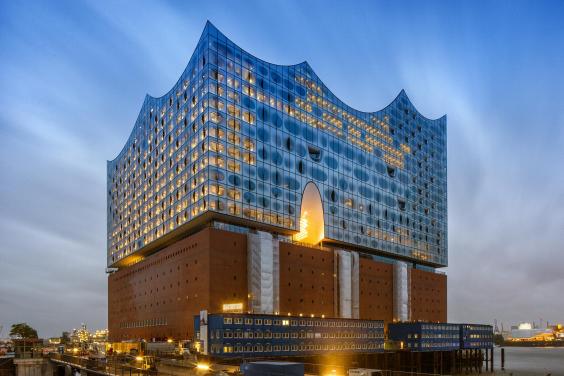 You can fly to Hamburg Airport (26), 9km north of the city centre, with easyJet (from Gatwick, Luton, Manchester and Edinburgh), British Airways (from Heathrow) and Ryanair (from Stansted).

The suburban rail link (S-Bahn line 1) runs from the airport every 10 minutes for a fare of €3.20 (hvv.de). It takes 25 minutes to reach Hamburg’s vast main station, the Hauptbahnhof (27). Taxis make the same journey for between €25-35 depending on your final destination.

The Fairmont Hotel Vier Jahreszeiten (28) (fairmont.com/vier-jahreszeiten-hamburg) opened in 1897 and is a grand old dame with 156 wrinkle-free rooms and more five-star pomp than anywhere else in Hamburg. If splashing out, request a lake view and try the two Michelin-starred Haerlin Restaurant. Doubles from €225, room only. 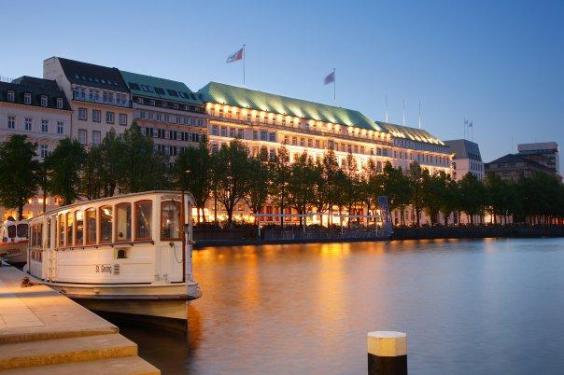 The Fairmont Hotel Vier Jahreszeiten is Hamburg’s most exclusive address

With cabins (not rooms), the 25hours Hotel Hamburg HafenCity (29) (25hours-hotels.com) has the harbour spirit in its bones. The seafaring decor is held together by vintage sailing accessories, bunk beds, and logbooks to leaf through, while there’s a handy kiosk on the ground floor selling Hamburg originals. Doubles from €124, room only.

Superbude has two offbeat hostels in the city, including a corker in St Pauli (30) (superbude.de). It’s heavy on hipster attitude and up-cycled furniture, with doubles from €60, room only.