China’s Tiangong-1 space module has re-entered the Earth’s atmosphere and broken up over the South Pacific.

The “vast majority” of the defunct space lab burnt up on re-entry, which occurred at 1.15am UK time, China’s Manned Space Engineering Office said.

It had originally said that the space station was expected to re-enter off the coast of Brazil in the South Atlantic, near the cities of Sao Paulo and Rio de Janeiro.

The US Joint Force Space Component Command (JFSCC) also confirmed the spacecraft had re-entered the atmosphere over the southern Pacific after coordinating with counterparts in the UK, Europe, Asia and Australia.

Tiangong-1, which translates to “Heavenly Palace 1”, was sent into orbit in 2011 for experiments as part of China’s space programme. 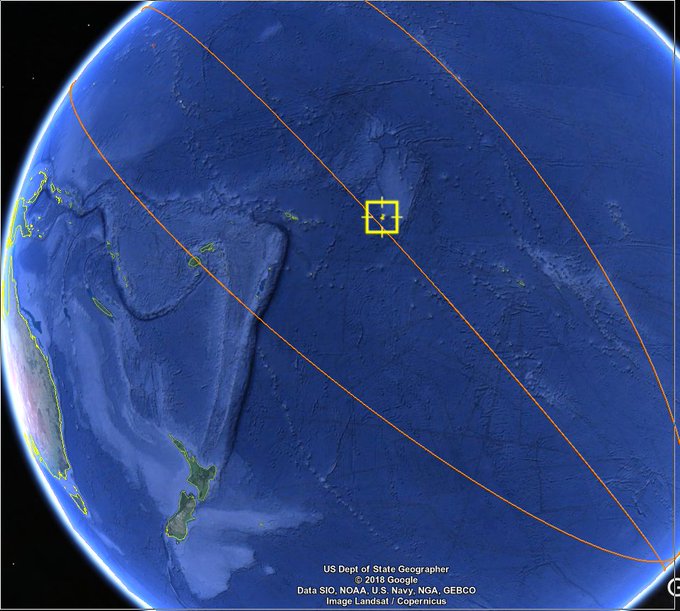 NW of Tahiti – it managed to miss the ‘spacecraft graveyard’ which is further south!

The original plan was to decommission it in 2013, but the mission was repeatedly extended.

The space station was set to have a controlled re-entry into the Earth’s atmosphere, but the lab stopped working in March 2016.

China had said its re-entry would occur at the end of 2017 but the process was delayed, causing some experts to suggest the space lab was out of control.

Tiangong-1 had not been occupied for three years, so there was no way of knowing for certain where it would land. And without being able to communicate with the space lab, controllers had no way of managing its descent.

Earlier forecasts said only around 10% of the bus-sized spacecraft would likely survive re-entry, mainly heavier components such as its engines.

Brad Tucker, an astrophysicist at Australian National University, said the re-entry was “mostly successful”, although he noted it would have been better if the lab had not been spinning toward Earth.

“It could have been better obviously, if it wasn’t tumbling, but it landed in the Southern Pacific Ocean and that’s kind of where you hope it would land,” he said.

“It’s been tumbling and spinning for a while, which means that when it really starts to come down it’s less predictable about what happens to it,” Mr Tucker said.

“It’s normal for spacecraft to re-enter the atmosphere, yet Tiangong-1 received so much attention partly because some Western countries are trying to hype and sling mud at China’s fast-growing aerospace industry,” it said.