China’s president, Xi Jinping, has made no secret of his desire to transform the Middle Kingdom into a global footballing superpower that can one day host – and win – a World Cup. This week, with the news that a Chinese consortium had shelled out £265m for a 13% stake in the owners of Manchester City, that dream moved one step closer to reality.

For while on the surface the multimillion-pound deal between City Football Group and China Media Capital (CMC) was all about Manchester City, it is also designed to help revolutionise the Chinese game and bolster Xi’s quest for footballing – and political – glory.

Xu Zhihao, CMC’s managing director, told Chinese reporters he and his colleagues had not simply wanted to buy a top-flight football club. They also thirsted for knowledge and experience of the English sports industry that could be transferred back to China.

“That [is what] will benefit Chinese football,” Xu said, according to the Beijing Times newspaper.

Li Ruigang, a one-time senior Communist party official who is CMC’s chairman, echoed those thoughts in an interview with The Paper, a Shanghai-based news website. “[O]ne of the key goals of this deal is to acquire experience we can take back to the Chinese sports industry,” he said.

Reports that Li, an English-speaking media mogul dubbed the Rupert Murdoch of the East, had been admitted to City Football Group’s board received a muted reaction in his native land on Wednesday.

A handful of patriotic football addicts took to Weibo, China’s Twitter, to celebrate their country’s entry into the Premier League as a further indication of China’s rise. “Applause! Applause!” wrote one Chinese City fan.

Sun Jihai, the Chinese defender who played in Manchester for six years, wrote: “I have been honoured to witness Manchester City’s growth and development in China. I hope this co-operation helps Chinese football develop better and brings Manchester City more fans.”

But many more reacted with sarcasm, accusing Li Ruigang of using the purchase to curry political favour with president Xi, who briefly commanded the Communist party in Shanghai while Li was an official there.

As part of his blueprint for footballing greatness, Xi has unveiled plans to build thousands of football pitches and schools across China, which is already home to the largest football academy on earth. 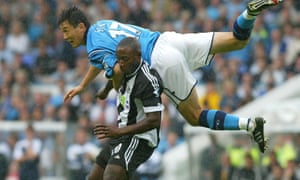 “Idiots,” fumed a third. “Why don’t they use the money to develop the Chinese national team?”

Zhang Yichen, the chief executive of Citic Capital, the consortium’s other partner, also trumpeted the purchase of one of the world’s top teams and its “huge crowd of fans”.

That crowd is likely balloon in size now City have become the first Premier League club to gain a solid foothold in the world’s number two economy.

“It’s massively important,” he said of the region. “[T]he stats tell you the sheer importance that Asia has for most, if not all, Premier League clubs.”

Speaking to Caixin, Xu Zhihao revealed the landmark deal had been months in the making – and was already in place when Xi Jinping met Manchester City players during his state visit to Britain in October.

“We have been talking for a long time,” he was quoted as saying.

Confirmation of the move will have been music to president Xi’s ears, as he pushes to turn the Chinese Dragons into a footballing force.

After visiting the Etihad Stadium in October, he returned home with a “Xi Jinping” No1 shirt signed by Sergio Aguero, Raheem Sterling and David Silva.

It is unlikely to be his last.