Germany’s Foreign Minister has cast doubt on Theresa May’s insistence that both a Brexit divorce deal and new free trade agreement with the EU can be completed by 2019.

In an exclusive interview with The Independent, Sigmar Gabriel said new trade relations would be “a laborious endeavour”, suggesting the UK may have to settle for simply getting “as far as we can” in the two years allowed for talks.

Mr Gabriel, also Angela Merkel’s Vice Chancellor, then said Ms May must give “certainty” that the UK will settle its Brexit divorce bill before talks begin on any future trade deal between Britain and Europe.

As Mr Gabriel prepares to meet Foreign Secretary Boris Johnson, he also dealt a further blow to the Prime Minister’s attempts to tie security to trade talks, saying the fight against terrorism is a “necessity” and not a “political choice”.

He also underlined “concerns” about the climate faced by foreigners in the UK amid heightened concerns over hate crime, in particular following a serious assault that left an asylum seeker with a fractured skull.

Mr Gabriel arrives in Britain on his first official visit as Foreign Minister in a bid to shore up “special, close and friendly” relations that he says exist with Britain ahead of Brexit talks, but he made clear that the “coherence and unity” of the remaining 27 EU states will come first in negotiations.

He spoke to The Independent less than a week after Ms May sent her letter to European Council President Donald Tusk triggering Article 50 and launching a two-year countdown to Britain’s departure from the EU.

Both in the letter and previous speeches, Ms May has said she wants both a withdrawal deal and future trade terms “agreed in the time period set out” under the article of the Lisbon Treaty. 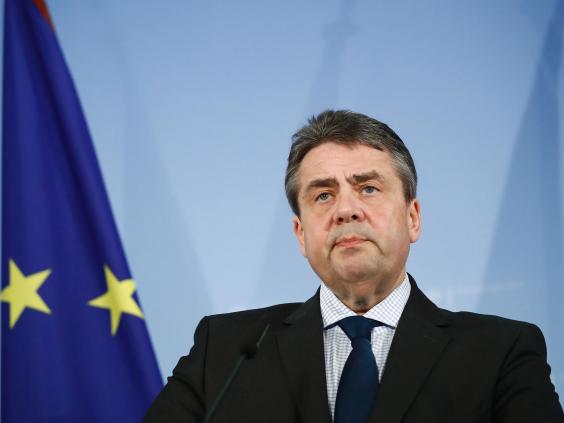 But asked whether it was possible, Mr Gabriel questioned the feasibility of what has now become a key premise of Ms May’s approach to Brexit.

“We are as keen as the UK is to complete both agreements as soon as possible,” he said.

“First, we have to get things right on the orderly withdrawal, then we will want to talk as soon as possible about our future relationship and get as far as we can within the next two years.

“However, I don’t want to speculate on time frames at a time when negotiations have not even started yet. Both sides must recognise that an agreement on a wide-ranging partnership will be quite a laborious endeavour.”

Ms May was also clear in her letter that she wants both the divorce talks and those related to a future trade agreement to occur in parallel, something that would allow them to be completed quicker.

But Chancellor Merkel was among the first European politicians to pour cold water on the plan.

Mr Tusk followed suit when he set out the EU’s draft negotiating position, stating that “sufficient progress” would have to be made on withdrawal talks before trade talks could begin.

Asked what “sufficient progress” would mean to Germany, he said: “We want to minimise…uncertainties as soon as possible. This is why I believe the UK and the EU should strive to secure an orderly withdrawal as their first order of business. It’s also why we share the position that has been laid out by President Tusk in the guidelines.”

He then added: “We’ll also have to work together towards achieving certainty that the UK will honour its financial obligations towards the EU.”

Some have put the bill the UK could face – to settle existing commitments to EU programmes and costs – as high as €60bn, though lower estimates come in at half as much.

Ms May faces a battle on the continent to clear the issue and begin trade talks, while also under intense pressure from the Tory right to pay as little as possible.

Her Article 50 letter appeared to suggest she would use the UK’s valued intelligence and security cooperation in the fight against crime and terror as leverage to force her point in Brussels, sparking dismay from Europe’s politicians.

Only after calls from Downing St did they take the Government’s “word” that Ms May had not meant to threaten withdrawing cooperation.

Mr Gabriel said of the furore: “If you look at the security threats we are facing today, from terrorism to organised crime to cyber attacks, you’ll see terrorist and criminal acts are increasingly transnational.

“These people don’t care about borders, and they surely won’t wait for us to figure out a way to work together on security matters after Brexit.

“The nature of these threats makes security cooperation more of a necessity than a matter of political choice. No citizen in the EU or the UK would accept a negative impact on security due to a reduced level of cooperation after Brexit. That’s why I believe it’s in our shared interest to maintain close security cooperation.”

Mr Gabriel highlighted guaranteeing the rights of both EU and UK citizens who have built up a life abroad, as another priority.

But the Foreign Minister went on to raise concerns about the general climate faced by foreigners in Brexit Britain.

He spoke as police question individuals in relation to the severe beating of an asylum seeker in South London and in addition to comments made by French Ambassador Sylvie Bermann on how her country’s citizens faced abuse following the EU referendum.

He said: “We often hear from foreigners who reside in the UK and who are very concerned about Brexit and its consequences, not only for their rights but also for the general climate towards foreigners. This concerns me.

“I am very fond of the strong bonds of friendship which have developed over the last 70 years between the people of the UK and Germany. It would be very sad to see these bonds weakened or broken.”

He emphasised that it would be essential to “continue fostering our friendship and people-to-people contacts between the UK and the continent, adding: “Brexit is a fact and there will always be friendship between our people.”

Mr Gabriel, who belongs to the centre left SPD that rivals Ms Merkel’s CDU despite being in coalition, said  pending German elections would have little impact on the country’s Brexit stance.

The SPD’s Martin Schulz, ex-president of the European Parliament, will launch a challenge against Ms Merkel in September, but Mr Gabriel said: “The idea of European integration has been one of the strongest continuities in the history of German political thinking since World War II.

“Every German government from Konrad Adenauer to Willy Brandt, from Gerhard Schröder to Angela Merkel, has known – Germany’s future lies in the European Union. This explains why there is a solid consensus on Brexit.”

A spokesman for Boris Johnson said: “The foreign secretary will tell the minister face to face that we want a deep and special partnership and want to work closely with our EU partners to get the best deal for both sides.

“He will make clear that this should not be like a divorce and we should enter discussions in a positive way. He will also reassure him that we will not use defence and security as a bargaining chip in negotiations but also that Gibraltar is also not a chip for bargaining.”