As a carefree teenager, my Saturday county netball games were motivated by my desire to compete and a simple, but steadfast, determination not to let the goal attack into the circle to shoot. More than two decades later and my life is filled with drop-offs, pickups, birthday parties, household chores, arguing with awkward children at home and managing even more awkward grownups at work.

Yet at the back of my mind there has always been a longing to return to my favourite school sport, if only I had enough time. Post-children, this desire only grew stronger as I desperately sought “me time” and an activity where I did not have to think for three other people. In my mid-30s, I joined an informal netball group in Kibworth, Leicestershire, after spotting it listed in the local newspaper. Now 38, I am gearing up for my second competitive season in the Market Harborough netball league, which starts in September. 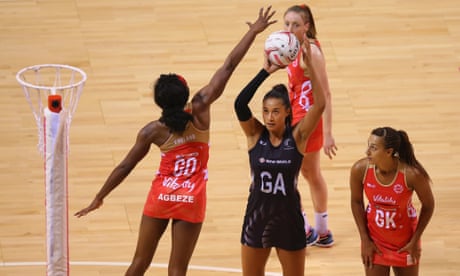 I play a variety of attack and defence positions for team Webbs, whose players span 20 years in age (although goal defence is still my favoured spot). The league itself has players aged between 14 and 55, and is a far cry from the occasionally bitchy, divisive sport played in school. Teams are supportive and friendly and when on court it is common to hear players bemoaning their age, or to spot the mother-and-daughter combos.

In fact, what has particularly struck me in the past year has been the surge in women attending Back to Netball and Back to Hockey in the region, especially mothers in their 30s and 40s. These programmes are a gentle reintroduction to the sport for people who have played in the past and are supported by lottery funding via Sport England. They are part of the government drive to get more people active and engaging with sport and other fitness activities.

More than 60,000 woman have taken part in Back to Netball since its launch in 2009, and research from Liverpool John Moores University shows that 61% of these were aged 30 to 49. The main motivations for returning were to lose weight and to develop a social life away from their lives as mothers.

When I asked Back to Netball players in my area why they had returned after so many years, their responses really struck a chord. Liz Smith, 37, told me: “Something I found really hard since returning to work after having a child is allowing myself time just for me, and justifying it against the demands of being a mother and a teacher. I’ve never had a focus on fitness, so gym sessions and classes start with good intentions and then get buried by other commitments. Playing netball is much more enjoyable for me because of it being a team sport.”

Similarly, Clare Hubble, 41, who last played netball in secondary school, wanted to put herself first for once: “After years of putting husband, family, business and home before me it was time I did something that reminded me who I am. I wanted to get fit, do something competitive yet social – but mostly do something that was just mine where I could be me. I’m much happier for it.” The desire for “me time” is a common one, according to Dr Jeff Breckon, an exercise psychologist at Sheffield Hallam University. “For these people there is something missing in their lives. It is about being back in control of aspects of their life,” he says.

The lottery-funded This Girl Can campaign has been hugely successfully in motivating women to get fit. “This Girl Can has dispelled the myth that you have to be fit and ripped to do exercise. The general population are in admiration of people who challenge themselves to do something different,” says Dr Breckon. He also refers to the spread of “positive contamination”, particularly in the workplace, with colleagues encouraging each other to take part in sport or joining each other in new activities. You can even join a Walking Netball group, which, since starting up in September 2016, has attracted 2,300 players, largely aged 55 and above.

Although there has been scepticism about the legacy of the 2012 Olympics, sports such as hockey – in which the women’s team won a bronze medal in London and gold in Rio last year – have seen a huge influx of new players. According to England Hockey, the numbers of women aged 46 and above returning to the sport has doubled since the eve of London 2012, and there has also been a 20% increase in women over 36 in that time. During the 2016/17 season 10,426 women aged 36 and above took part in Back to Hockey sessions.

For Kirsty Bishop, 42, returning to the sport after 25 years was a nostalgia trip that took her “straight back to school” and gave her a real buzz. However, the sessions were moved and clashed with her Back to Netball group, so she had to pick between her two favourite sports. She now plays club netball again, and has rediscovered her competitive streak, playing goalkeeper with the longest lean in the league.

Returning back to a school sport is not without its perils. Bones takes longer to heal after breaks, as my permanently bent little finger attests, and you sometimes find yourself training alongside 12-year-olds who are whipping your ass without even changing into sports gear.

And changes to the Sport England funding strategy have meant that affiliation fees have risen – England netball lost £8m in the 2017 government funding round due to money being reallocated away from sports and ploughed into a wider range of activities and age groups.

Fortunately, there are hundreds, if not thousands, of informal women’s sports groups across the country that do not depend on external funding, like the one I still attend in Kibworth. So it is always worth looking out for notices in the park, school or local shop, or trawling through Facebook pages to find a group that suits. You can even recreate the full nostalgia of sticky summer afternoons on the school field playing rounders. It’s never too late to return.