The Treasury’s own fiscal watchdog expects the Government to underspend its new ambitious capital infrastructure budget by almost £15bn over the five years to 2021-22.

The forecast is likely to be an embarrassment for the Chancellor, Philip Hammond, since it is equivalent to almost two-thirds of the additional £23bn infrastructure spending he announced to great fanfare in the Autumn Statement.

In his speech to Parliament, Mr Hammond unveiled a £23bn National Productivity Investment Fund “to be spent on innovation and infrastructure over the next five years”.

“We choose to invest in our economic infrastructure because it can transform the growth potential of our economy, as well as improving the quality of people’s lives,” he told MPs.

This spending increase included an additional £3.5bn for affordable housing, £2.9bn on roads and £750m on broadband infrastructure over the five years to 2021-22.

There was also a pledge for £7bn in the final year of the forecast which the Treasury said would be allocated “in due course”.

The additional infrastructure spending, to be funded by additional borrowing, was a major departure from the fiscal approach of Mr Hammond’s predecessor, George Osborne.

Yet the small print of the Office for Budget Responsibility’s document shows an assumption that the central government’s planned outlay on “public sector gross investment” (PSGI) will be underspent by a cumulative total of £14.8bn over that same five year period. 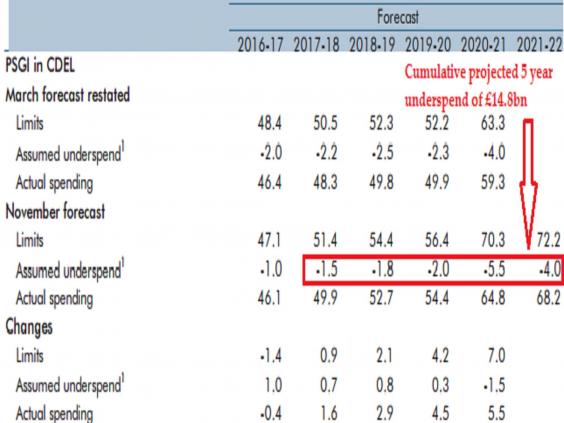 Sources at the OBR explained that this was a “judgement” by the watchdog based on the fact that, historically, Whitehall departments have tended to spend less than their permitted capital budgets.

The overall spending undershoot projected for the five years to 2019-20 was actually slightly lower than the OBR forecast in March.

And the OBR also says that “past experience suggests that planned increases in capital spending will not translate fully into actual spending in the year planned”, prompting it to assume that 20 per cent of each year’s capital budget will be spent in the following year.

This implies that part of the sizeable £4bn underspend in 2021-22 will be spent in 2022-23, although this is beyond the OBR’s current forecasting period.

Nevertheless, the underspend forecast echoes scepticism in some quarters over whether the Chancellor will actually be able to fulfil his bold infrastructure investment ambitions.

“I remember Osborne announcing road schemes that I’d announced myself. And with housing it’s as much planning as it is money. The Government really needs to ask itself what it needs to do to get these projects done and a lot of it is planning [reform].”

The Government’s plans imply a cumulative total £305bn of central government infrastructure spending in the five years to 2021-22, but the OBR is assuming only £289bn actually goes out the door.

Treasury sources said they were confident that the full spending committed by the Chancellor would be delivered and that the OBR would revise away its underspend projections over time.

They pointed out that the Whitehall spending limits had actually risen by less than the OBR’s projected final increase in spending in the three years to 2019-20.

A spokesperson said: “The Chancellor has set out his commitment to prioritise high-value investment in infrastructure and innovation that will contribute to raising Britain’s productivity. The OBR forecast shows that we will spend all of the additional capital allocated at Autumn Statement, as well as spending more of the existing allocation.”

Despite the projected shortfall, Mr Hammond’s changes still represent a sizeable increase on the capital investment plans laid out by Mr Osborne in the March Budget.

Allowing for the depreciation of infrastructure and including capital spending by other quasi public bodies such as housing associations, total public sector net investment is now projected to rise to 2.3 per cent of GDP by the end of the decade, whereas under Mr Osborne it had been due to dip as low as 1.5 per cent.

The director of the Institute for Fiscal Studies, Paul Johnson, this week described Mr Hammond’s capital spending plans as “significant” and “well above the average over the last 30 years”