Copenhagen is regularly voted the happiest city in the world, and has in recent years become something of a beacon for hipsters, given its eminently Instagrammable streets and the supremacy of Danish design. Furthermore, this month Frost (frostfestival.dk) brings an immersive celebration of music and light installations to the city, until 26 February. It’s the first of many festivals to be held in Copenhagen in 2017, encompassing an eclectic mix that includes Distortion festival, dedicated to emerging dance music, and the Copenhagen Opera Festival.

But though Copenhagen might currently be the cream of the Scandi crop, this is undoubtedly one of Europe’s more expensive capitals. So here’s a guide to seeing the parts of the city that don’t cost much – or, even better, are free.

Copenhagen, being flat, built around waterways and with a compact downtown area, is a very walkable city – and most points of interest are within easy reach of City Hall Square (1) and Central Station (2), where the tourist office (3) is situated (4 Vesterbrogade; winter opening hours 9am-5pm, 9am-4pm on Saturday, closed Sundays).

It’s also a great city for cyclists, and its reasonably priced Bycyklen rented bike scheme (DKK30, about £3.50, an hour; bycyklen.dk) is a good way to get around. Visitors will be most interested in the historic central area, autonomous hippie neighbourhood Christiana and hipster hub, Vesterbro.

A Copenhagen Card (copenhagencard.com), which can be purchased online or at the airport, gives unlimited use of public transport and free entrance to 72 museums and attractions for 24 or 48 hours (DKK379 or DKK529, or from about £43, up to two children under 10 free).

Forget the DKK50 entry fee at the City Hall Tower and head to the tower at Christiansborg Palace (4), the seat of Danish parliament, instead. It is the tallest in Copenhagen at 106 metres, and entry is free. As Copenhagen is very flat, you can see all the inner-city landmarks, including Tivoli, the huge Victorian pleasure gardens open between April and September.

Browsing doesn’t cost a thing. Stroget runs from City Hall Square (1) to Kongens Nytorv Square and, at 1.1km, is one of Europe’s longest pedestrian streets. It’s home to dozens of shops, from cheap souvenir outlets to high-end department stores – including local landmark Illum (5), which has been trading since 1891, and is the equivalent of Selfridge’s in London. LEGO (6), Denmark’s most famous export, has its flagship store here and children of all ages can assemble toys and buy box sets that aren’t available elsewhere. Most Stroget shops are open 10am-8pm daily (11am-6pm Sunday). 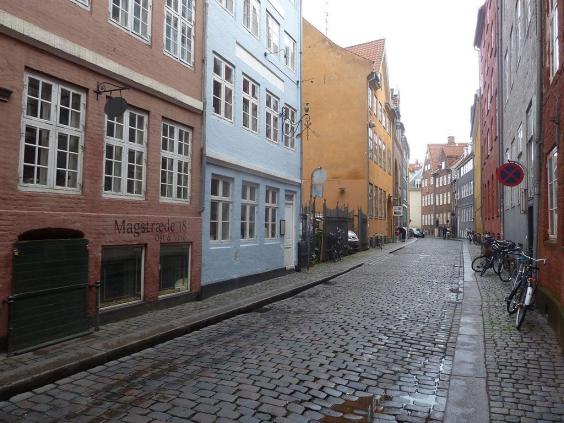 Magstraede is one of Copenhagen’s oldest and prettiest streets (Wikicommons)

This walk allows you to sight-see for nothing. Start in City Hall Square (1) (after popping into City Hall (7), free entry, its size and grandeur a sign of Denmark’s rich sea-faring and empire-building past). Back in the square, notice the statue of its most famous son, Hans Christian Andersen. With City Hall to your right, turn right into Regnbuepladsen and then left on Longangstraede, which leads into Magstraede (8) and Snaregade (9), two of Copenhagen’s oldest streets. They still have their original cobbles and a higgledy-piggledy array of different-sized houses with brightly painted plasterwork.

Double back on yourself to turn left into Frederiksholms Kanal, and cross the canal at Marmorbroen bridge, which takes you into Christiansborg Palace (4), where you got that great view.

Walk through to the other side of the complex, turn right into Christiansborg Slotsplads and continue along Borsgade, where the striking Gothic building on your right is the former stock exchange building (10). Cross the canal at Borsbroen, into Havngade, right at Holmens Kanal and continue along Holbersgade, which ends at Nyhavn (11). The colourful houses here were once frequented by rowdy sailors seeking female company in its many taverns, but the area is now the tourist centre of Copenhagen. 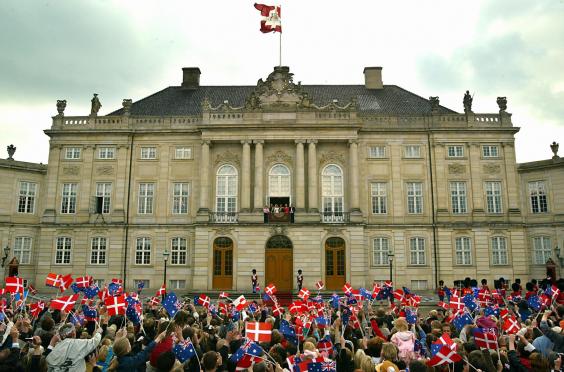 Amalienborg Palace is home to the Danish royals (AFP/Getty Images)

Cross the canal at Nyhavnsbroen, continue along Toldbodgade, and eventually on your left is Amalienborg Palace (12), home of Danish royals. The central forecourt and gardens are public spaces, so enjoy these for free, too.

Kompagnistraede and Laederstraede form Copenhagen’s “food street” with several decent eateries, including Stella (13) (cafestella.dk) and Café Zirup (14) (00 45 3313 5060; Laederstraede 32), where lunch with a beer costs DKK140-180 (from around £16). Have the good-value breakfast platter (pastry, fruit, cheese, skyr, fish), served all day, or the Danish speciality, smørrebrød (open sandwiches), served at both cafés. 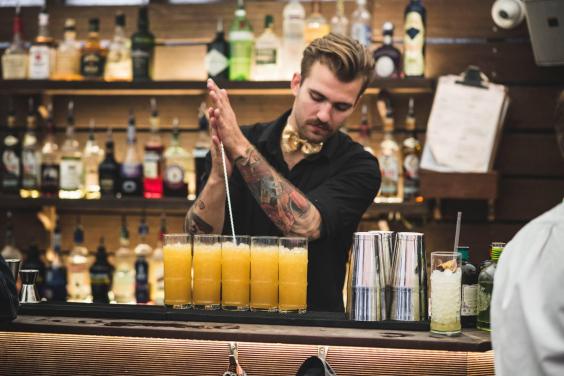 Bistro Royal (16) (madklubben.dk/bistro-royal), a large and lively restaurant, serves good-value international cuisine, from smorrebrod and salads to burgers and beef fillet with truffle-infused chips. The generous serving of beef tartare (DKK100, about £11.50) is a bargain. For more romantic dining, the Maven (17), located in a former church, is suitably candlelit and atmospheric and serves “home-style” hearty Danish dishes including veal shank (DKK215, approx. £25).

Copenhagen locals love a leisurely Sunday brunch, and Vesterbro offers clean-eating and some serious people-watching in the capital’s coolest area. Fancy half an avocado with chilli oil and baked almonds, or lactose-free yoghurt with homemade berry compote? Then head to Mad & Kaffe (18) (madogkaffe.dk). Dishes from DKK75, or £8.50. 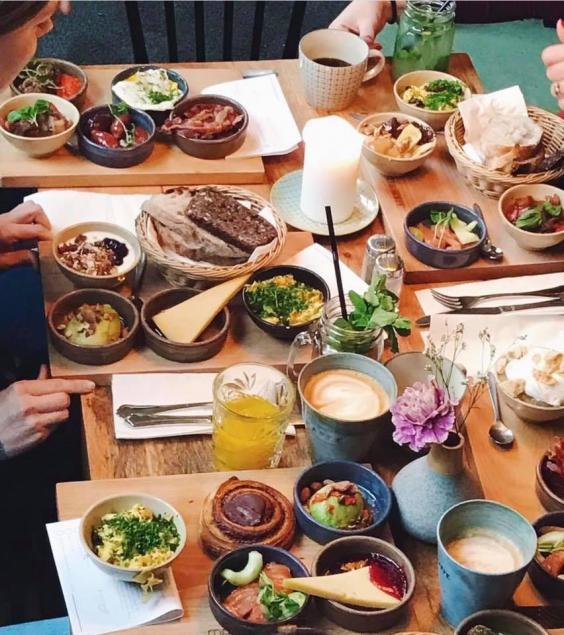 Mad & Kaffe is the best spot for brunch (Facebook)

Walk across Inderhavnsbroen (19), the striking new pedestrian bridge at Nyhavn. It’s known locally as the “kissing bridge” as, before its two halves were joined in the middle from each bank of the harbour, it looked like two lovers reaching for a kiss. Then wend your way to Christiana (20) – a commune established in 1971 when a group of hippies took over an abandoned military barracks. Now with 850 residents and covering eight acres, it’s an eco-city within a city, where the sale of marijuana is tolerated but cars are banned. The area is a colourful collection of homemade houses, workshops, art galleries and cheap organic cafés. 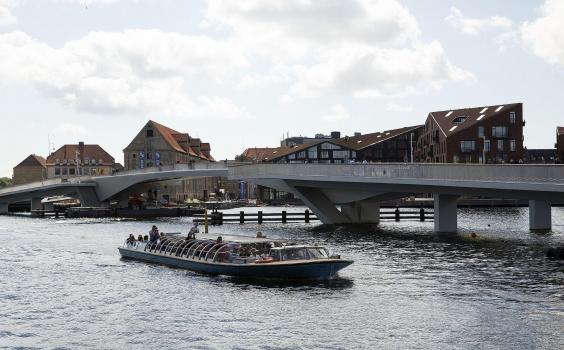 While you’re this side of town, visit the Church of Our Saviour (21), built in 1752. Its striking serpentine spire dominates the Copenhagen skyline. You can climb the 400 steps running up the outside of the spire when it reopens in March (Monday to Saturday 10am-4pm, Sunday 10.30am-4pm, DKK45, about £5). 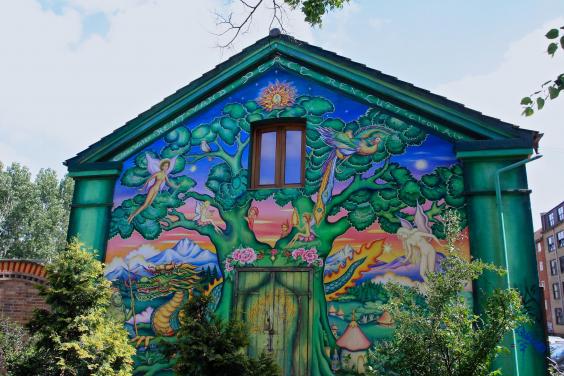 If you were a fan of The Killing, Borgen or The Bridge you will be familiar with the Oresund bridge (24), a magnificent 8km structure connecting Copenhagen with Malmo in Sweden. Trains from Central Station reach Malmo in 36 minutes (from DKK340, about £38, return), so you can say you popped over to another country for a coffee (admittedly a budget-busting one). 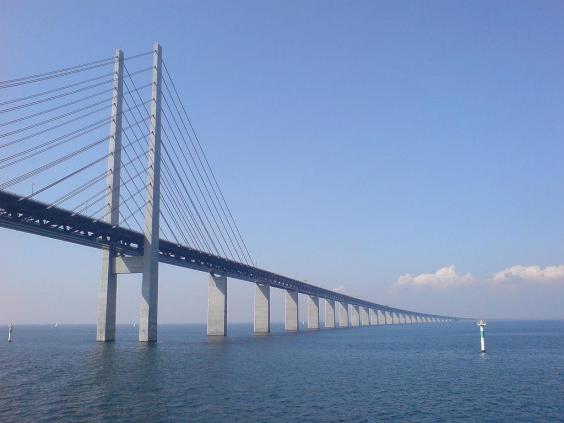 Kastrup is a few miles south of Copenhagen and the city’s transport system is zonal  – Kastrup is in zone 4, the city centre zone 1 – and tickets can be used on trains, metro or bus. A zone 1-4 ticket is DK36 (£4.20).

The metro and train stations are located respectively above and beside terminal 3 (UK flights land at terminal 3 or terminal 2, a 10-minute walk from T3); metro (to Norreport hub) and trains (to Central Station) take 13 minutes. The 5A bus takes 30-35 minutes to the city centre; a taxi takes about 20 minutes to downtown and costs approximately DKK250-DKK300 (from about £30).

The Square (25) (thesquarecopenhagen.com) overlooks City Hall Square (1) so couldn’t be more central, and the minimalist rooms are compact but comfortable. Doubles from DKK996, approx. £115, room only.

A decent budget option is Wakeup Copenhagen (26) (wakeupcopenhagen.dk), a bright new capsule-style hotel in Borgergade, which has doubles from DKK400, approx. £45, room only.

If you’re pushing the boat out, one of Copenhagen’s oldest hotels, D’Angleterre (27) (dangleterre.com), which dominates Kongens Nytorv square, oozes quality with its beautifully decorated rooms (in muted colours, of course) and the staff’s quiet but old-fashioned courtesies. Doubles from DKK3,250, about £370, room only.