Few things are as comforting in the winter as sheltering from the bleak weather in the dark wood and creaking floorboards of a pub with a beer and some good company.

You can’t really find this atmosphere anywhere else, whether in a dive bar in New York or a bistro in Paris. That’s what father-daughter duo publican and writer George Dailey and photographer Charlie Dailey – who was born above her dad’s pub – have captured in their book Great Pubs of London. The book celebrates some of the capital’s most historic pubs, many of which have been trading for over 400 years and are “intrinsically woven into our history and culture,” Charlie Dailey tells The Independent.

Great Pubs of London – In pictures

As pubs are places for telling stories and tall-tales, the book dabbles in this too. It’s not certain, for instance, whether the casks on the wall in the Cittie of Yorke in Holborn, central London, are just decorations from the early twentieth century or really from the Tudor era. The Prospect of Whitby, meanwhile, was first built in 1520 in Wapping was once famed for its bare-knuckle and cock fights, and was visited by writer Charles Dickens and diarist Samuel Pepys.

Dailey captured over 100 pubs around the capital to help illustrate her father’s words. But the moment that stuck most with her was at a pub in the east of London. 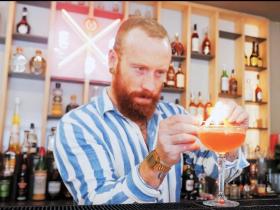 “The most memorable encounter has to be photographing and chatting with Sir Ian Mckellen in his own pub, The Grapes in Limehouse,” recalls Dailey. “He very kindly agreed to write the forward and sit for portraits to support our project.

“It is a riverside pub steeped in history where our great explorers would have drunk before embarking to uncover the new world and Dickens often visited for an ale or two. Sir Ian was extraordinarily generous with his time and genuinely enthused by our book. It was a great day for me.”

“Two pubs spring to mind as my favourites,” she goes on. “The French House for the warmth of Leslie the owner and her fabulous staff. A wonderful pub in the heart of Soho that has the feel of a genuine community filled with artists and bohemians.

“The Nags head in Belgravia was also a real surprise to me. It photographed like a fabulous film set, the walls crammed with antique military memorabilia and a menagerie of fascinating treasures.”

“Walking into the magnificent Cittie of York and photographing the mesmeric vaulted main bar, with Rembrandt-esque light flooding in from the high windows and knowing that Dylan Thomas once sat here writing was a thrill. It was an unexpected pleasure and I hope some readers will look at our historic pubs in a new light after reading our book.”

The experience of shooting the pubs, says Dailey, certainly changed her view on the watering holes.

“No longer were they just grimy, old man’s drinking dens. Dad’s research and constant discussions opened my eyes to the fact that in our midst, we have places where Shakespeare, Dickens, Byron, Blake, Shelley and Keats once drank and presumably drew inspiration. Where great explorers would drink before setting off into the unknown, where militaristic battles were planned, celebrated and commiserated. In essence, these establishments are imbued with some of our most fascination history and characters.”

And while Londoners are spoiled for choice when it comes to places to meet and socialise, elsewhere in the country pubs take on a deeper significance. “In the countryside in particular though, the village or local pub can be the heart of the community and the only place people can gather, chat and switch off,” she says.

But as pubs are closing at a rate of 27 a week, the book also has feels like it is trying to capture something that is slowly dying.

“There is an obvious challenge for many pubs,” says Dailey. “Property prices and extreme taxes make it very hard for pubs to keep trading. There are many organisations campaigning to protect our pubs and many have been in touch to say our book will really help their cause.”