A rare case of the Zika virus being transmitted through sex, not a mosquito bite, has been reported in the US.

A patient infected in Dallas, Texas, is likely to have been infected by sexual contact, the Centers for Disease Control (CDC) told the BBC.

The person had not travelled to infected areas but their partner had returned from Venezuela.

Zika is carried by mosquitoes and has been linked to thousands of babies being born with underdeveloped brains.

It is spreading through the Americas and the World Health Organization (WHO) has declared the disease linked to the virus a global public health emergency.

What is the risk to unborn children?

The American Red Cross has meanwhile urged prospective blood donors returning from Zika-hit countries to wait at least 28 days before donating their blood.

The “self-deferral” should apply to people returning from Mexico, the Caribbean or Central or South America during the past four weeks, the Red Cross said in a statement.

Meanwhile, Brazil – the country worst hit by the outbreak – has revealed it is investigating 3,670 suspected cases of microcephaly in babies linked to the Zika virus.

A total of 404 cases have so far been confirmed – up from 270 last week – while 709 cases have been discarded, the country’s health ministry said.

If Zika can readily spread through sex, then it poses a risk to every country not just those with the Aedes mosquito.

So far, authorities have said sexual transmission is rare, but last year they would have said any case of Zika was rare, too.

This explosive outbreak has caught the world by surprise and many key questions remain unanswered.

Exactly how common or rare is sexual transmission? Can it be spread by the 80% of people who show no symptoms? How long does the virus persist in semen? When is it safe to have sex again?

What should men do after visiting affected countries? Can women also spread the virus through sex?

However, this is not a new HIV/Aids moment. HIV infection is incurable and dramatically shortens lives without daily medication.

Zika infections are short, mild and pose a significant threat only in pregnancy.

The ministry also said 76 infant deaths from microcephaly, either during pregnancy or just after birth, were suspected.

The case in Dallas would be the first known infection to take place in the mainland US, though Texas has seen seven other Zika cases all related to foreign travel.

Anne Schuchat, principal deputy director for CDC, said this was the first case it had dealt with involving a “non-traveller”.

A statement issued by the CDC said the best way to avoid Zika virus infection was “to prevent mosquito bites and to avoid exposure to semen from someone who has been exposed to Zika”.

The case is “significant” if it was definitely transmitted through sexual contact, Alaka Basu, a senior fellow for public health at the UN Foundation, told the BBC.

“This significance is parallel with the HIV/Aids case. It’s worse in some ways, because there are two modes of transmission.”

It is not the first known case of sexual transmission. There was a case in 2013 in French Polynesia, according to the CDC website.

The CDC recommends that pregnant women avoid travel to more than two dozen countries with Zika outbreaks, mostly in the Caribbean and Latin America, including Venezuela.

Brazilian President Dilma Rousseff said her government was focused on eradicating the mosquito that transmits the virus.

In an address to a joint session of Congress, she said considerable funds would be set aside for the programme.

“We should all be worried about microcephaly,” she said. 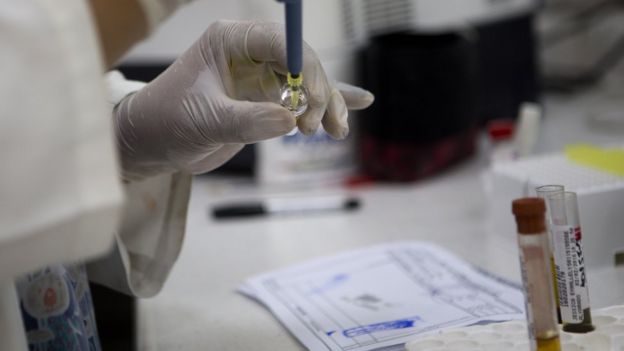 The disease is suspected of being especially dangerous for pregnant women

The alert issued by the World Health Organization (WHO) on Monday puts Zika in the same category of concern as Ebola.

It means research and aid will be fast-tracked to tackle the infection.

WHO director general, Margaret Chan said the priorities were to protect pregnant women and their babies from harm and to control the mosquitoes that are spreading the virus.

WHO has said it could take up to nine months for experts to prove or disprove any connection between the virus and babies born with microcephaly.