In the small Flemish town of Poperinge, a few miles from the French border, a very British institution is celebrating its 100th birthday. Founded in 1915 by Army chaplain Philip “Tubby” Clayton, Talbot House was a unique refuge where British soldiers of all ranks could unwind, away from the terror of the trenches. Remarkably, it’s still going strong today.

Modern Poperinge is a sleepy place, a cluster of quaint brick houses huddled around a cobbled square. Yet throughout the Great War it was one of the busiest places on the Western Front. This was where the troop trains arrived, bringing fresh recruits from Blighty. Ypres was only eight miles away, shelled to pieces by the Germans, but Poperinge was out of range – well, just about. For four years this town was full of British soldiers, on their way to Ypres, or returning from the front for a few days’ R&R. It was for these soldiers that the Reverend Clayton established Talbot House, named after the brother of a fellow padre who’d been killed at Ypres.

This handsome old townhouse with a pretty walled garden belonged to a Belgian family who had fled to France at the war’s outbreak. Clayton rented it from them and transformed it into a little slice of England. There was a simple chapel in the attic, with a carpenter’s bench for an altar, where Tubby held CofE services. Soldiers were welcome to attend, but Tubby didn’t shove religion down their throats. What he provided was a haven of normality, with a piano, a few pets (cats and birds) and even a modest library. For the soldiers who sought sanctuary here, it was a precious link with the peaceful life that they had left behind.

In the class-bound culture of that era, a club where officers and men mingled freely was rather radical. Tubby got away with it because he was such an engaging fellow, and Talbot House is still adorned with his witty notices: “the wastepaper baskets are purely ornamental”; “no swearing aloud” (sic). Yet despite his charm, the Rev Clayton was no pushover, as a lively exhibition in an adjoining modern museum attests. “The boss isn’t always right, but he’s always the boss,” read a sign on his office door. 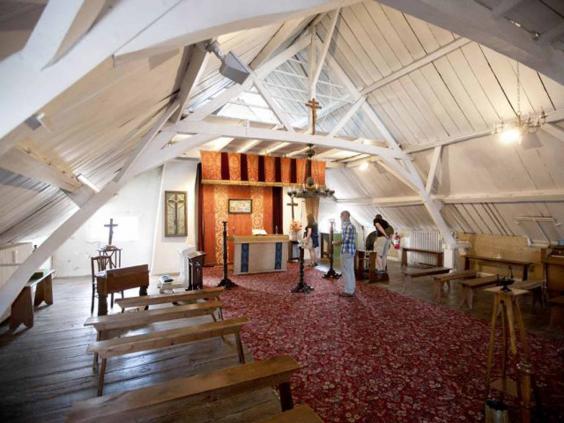 Around the corner from Talbot House, on the ground floor of the Gothic town hall, is a more sombre memento of the Great War. Here are the cells where 25 shell-shocked British soldiers each spent their last night, alone, before they were shot at dawn for desertion, in the walled courtyard outside. One sparse cell has been preserved, including the original graffiti. You can make out a few names and initials – someone has even drawn a battleship. A series of simple placards supply grisly (and supremely poignant) details.

The youngest Commonwealth soldier killed here was a West Indian volunteer called Herbert Morris. He was just 17. “There is no calm in my head,” he told the allied soldiers who arrested him. “I cannot stand the sound of the guns.” Today, he’d be diagnosed with post-traumatic stress disorder, but in those less enlightened times he was executed by firing squad.

Talbot House is an ideal base for exploring the Ypres Salient – a bulge in the Western Front which became the focus for some of the war’s fiercest battles. Ypres itself is stunning – a maze of winding alleys lined with ornate, historic houses. You’d never guess the entire town is an elaborate fake. Flattened by German artillery, it was completely rebuilt between the wars in the original medieval style (restoration was almost complete in 1940 when the Germans invaded again).

The grandest building in Ypres is the Lakenhalle, which houses the superb In Flanders Fields Museum. This display, which opened last year, explains what happened here: 200,000 British soldiers died at Ypres; only 100,000 were identified. Commendably, this museum doesn’t shy away from the horrors. The photos of shattered bodies and mutilated faces form a stark contrast with propaganda posters from both sides.

A short walk away is St George’s, a prim and proper Anglican Church full of memorials to British soldiers. Here, you could be in the Home Counties. I found the most emotive mementoes to be from British schools, remembering fallen Old Boys.

For most British visitors, the main focal point is the Menin Gate – an enormous arch inscribed with the names of more than 50,000 Commonwealth troops who died here, yet have no known grave. Since 1927, when this monument was inaugurated, the Last Post has been played here every evening, apart from during the Nazi occupation. It’s an intensely evocative ceremony, attended by visitors of all ages. Even though the veterans and their closest relatives are long gone, it’s becoming more popular every year. 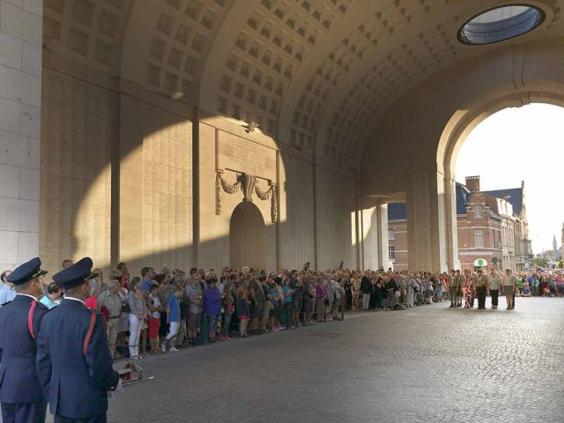 There are several war cemeteries within a few miles of Ypres, all of them profoundly moving. I saw the graves of posthumous recipients of the Victoria Cross and the headstone of a 15 year old (he lied about his age). “Sadly missed by father, sister and brother,” read another. But the inscription that affected me more than anything was the often repeated words of Rudyard Kipling: “A Soldier of the Great War, Known Unto God”.

I finished my Great War pilgrimage at Tyne Cot, the largest war cemetery in the world. Nearly 12,000 soldiers are buried here – more than 8,000 of them unidentified. Another 35,000 names are inscribed here, of those whose bodies were never found. Near the brow of this bare hill, where so many young men died, there are four German graves, recently relocated as an act of reconciliation. For me, this was particularly poignant. My English great grandfather fought on the Western Front, for King and Country. My German great grandfather fought here too, for the Kaiser and the Fatherland. Both survived, but both lost sons in the war which was to follow. “War is an ageing profession,” wrote Tubby Clayton. “The boys’ faces grow old before their time.”

The Reverend Clayton also survived the war. From 1922 to 1962, he was vicar of All Hallows in Tower Hamlets, east London, overseeing the restoration of the church after it was bombed by the Luftwaffe. He died in 1972, at the grand age of 87. In his attic chapel in Talbot House, he baptised more than 500 soldiers. “A trench-going padre makes a church-going battalion,” he observed.