A trip to the British seaside – particularly the windswept tip of north Norfolk – may not be top of everyone’s to-do list at this time of year, but the right place to stay can make even the most rain-soaked winter walk invigorating rather than intolerable.

Between the small towns of Burnham Overy and Wells-next-the-Sea – just inland from one of the area’s most beautiful beaches – is the Victoria Inn, a restaurant with rooms that dates back almost 200 years. Located on the Holkham Estate, the place has a hint of the hunting lodge about it – mounted antlers in the restaurant, rooms named after local shooting drives – but if, like me, you’re more into fireplaces than firearms, you’ll still feel right at home.

I stayed in Emmerdale, one of the four suites and six standard rooms in the newly converted Ancient House (actually built in 1885), which opened opposite the main inn last May. It’s traditionally decorated – plush headboard, antique dressing table, framed landscape prints – though a neutral colour scheme and subtle fabrics stop it from crossing the line into fusty.

There’s a separate living room, complete with sofa, armchairs and TV, but as it was separated from the bedroom by two extremely heavy fire doors, which resisted being wedged open, I found myself too lazy to move between the two, and spent most of the time in the cosy bedroom instead (there’s a TV in here too). One thing the living room does have going for it, though, is the minibar, which comes with a complimentary mini prosecco and a bottle of fresh milk. Alongside the tea and coffee-making facilities are some posh biscuits. 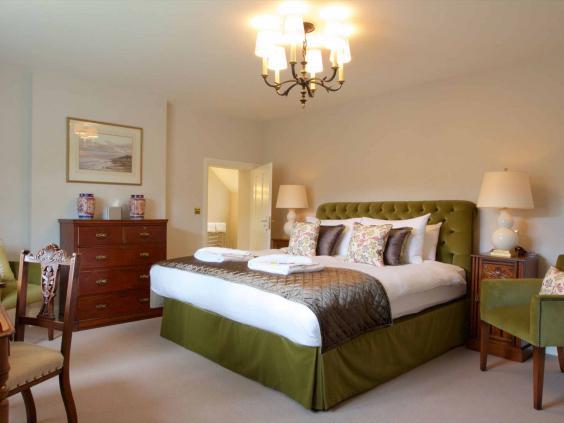 The bathroom is a vision of white and cream, with a standalone bath (the hugest I’ve ever encountered) and separate shower – both with slightly overcomplicated taps – and generous quantities of Noble Isle toiletries.

Breakfast is served in the restaurant. As well as a full English, eggs Benedict, cereals and so on, there are a couple of more interesting items to choose from. I went for smoked haddock, which came with a perfectly poached egg and tangy hollandaise. Weeks later, I’m still craving the taste of the deliciously salty fish. A breakfast bonus was the availability of decaf tea which, as a non-caffeine-drinker (fussy, I know), I’m always pleasantly surprised to find on the menu.

Although the estate is owned by the 8th Earl of Leicester, you’re unlikely to find him working on reception. Instead there is a team of dedicated staff across the restaurant and rooms. On arrival, the heating and hot water in my room weren’t working, and the way this was dealt with was like a masterclass in customer service. As I put on the fan heaters (which come as standard in each room) a little bottle of champagne was brought round, along with the key to another room to shower in. By the time I finished dinner a couple of hours later the problem was sorted.

A few minutes’ drive, or a 20-minute walk, away is the 18th-century Holkham Hall. It’s closed to visitors over the winter, but you can still admire the Palladian-style exterior and wander the pretty grounds, with their lake, obelisk and huge herds of deer.

Great walks nearby include the vast sandy beach at Holkham Bay, and Blakeney National Nature Reserve (bit.ly/BlakeneyReserve), a rugged stretch of coast that’s home to grey seals and an array of birds – check out the “Twitchers’ Bible” at The George pub in Cley, where birdwatchers make notes (and sometimes sketches) of species they’ve spotted (01263 740652;thegeorgehotelatcley.co.uk).

If you prefer creature comforts to windswept walks, the chi-chi town of Burnham Market will cater to all your gourmet deli, posh pub and gift shop needs.

The obvious choice for dining is The Victoria itself. It focuses on using local ingredients: meat comes from the estate, crabs from Cromer and mussels from Brancaster. Even the cheese is from a nearby village. The menu ranges from “Vic’s favourites” (smartened-up pub grub), such as fish and chips, to fine dining dishes including beef carpaccio. My starter, a black pudding Scotch egg, would – for the less greedy – have been substantial enough for a main, but I followed it with the “home grown” special, a butter-soft cut of venison.

The Victoria Inn, Park Road, Holkham, Wells-next-the-Sea, Norfolk NR23 1RG (01328 711008; holkham.co.uk). Double rooms from £125, B&B. Dogs are allowed to stay in the rooms in the main building, but not in Ancient House; secure kennels are available.