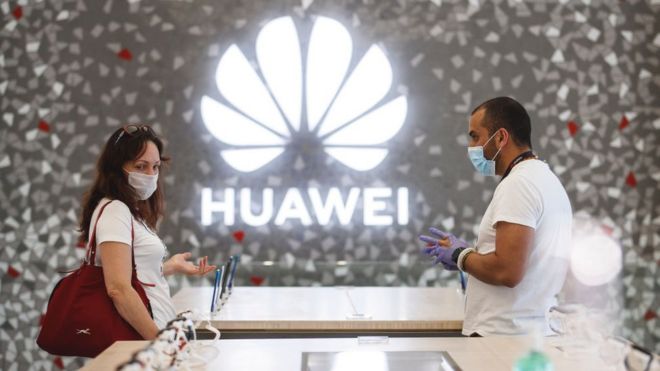 The US Defense Department has determined that 20 top Chinese firms, including Huawei, are either owned by or backed by the Chinese military.

The determination could lay the groundwork for new US financial sanctions against the firms.

It comes as the US has pressured other countries, including the UK, to bar Huawei for national security reasons.

The BBC understands that the list has been published in order to inform congressional committees, US businesses, investors and other potential partners of Chinese firms about the role such firms may play in transferring sensitive technology to the Chinese military. The list is also likely to grow.

Under US law, the Defense Department is required to track firms “owned or controlled” by China’s People’s Liberation Army that are active in the US.

The Pentagon has been under pressure in recent months from lawmakers of both the Democrats and Republican parties to publish and update the list.

In November, US senators Tom Cotton and Chuck Schumer wrote a letter to Secretary of Commerce Wilbur Ross, asking for an update on reviews of US policy that are mandated by the Export Control Reform Act of 2018 and the 2019 National Defense Authorization Act.

In the letter, the senators emphasised their concerns about the danger of exporting critical US technologies to companies with Chinese ties.

They also questioned why the Commerce Department had been slow to complete export-control reviews mandated by the two acts.

The senators stressed that reviews should be conducted to assess whether the Chinese Communist Party had been stealing US technology with military applications, as well as whether it had been enlisting Chinese corporations to harness emerging civilian technologies for military purposes.

“What is the status of this review and implementation of the results? Will this review determine specific sectors of the US economy that the Chinese are targeting for espionage and forced technology-transfer efforts? Will you modify the scope of controls for military end uses and end-users in China? Will you make the results of this review public?,” wrote Mr Cotton and Mr Schumer.

“We urge you to conduct these mandatory reviews as quickly and thoroughly as possible. Thank you for your time and attention to this important matter of national security.”

The White House already taken several steps against Huawei and other Chinese firms, including barring US companies from selling them certain technology without permission. The administration has also said its trade war with China, which resulted in billions of dollars worth of tariffs, was a response to theft of US trade secrets.

But it has faced calls by some in Washington to act more aggressively.

Huawei has contested US claims against it as “unsubstantiated allegations”.