Home Secretary Theresa May is to address Parliament on the row over her department’s handling of historical sex abuse claims.

The Home Office faces accusations it failed to act on allegations of a Westminster paedophile ring when they first emerged in the 1980s.

She is also set to announce a review into public bodies and their duty of care towards children.

Labour has called for a “wide-ranging” inquiry.

Ministers have rejected calls for an over-arching inquiry into the various abuse allegations from the era, pointing to ongoing police investigations.

But BBC Radio 4’s chief political correspondent Gary O’Donoghue said there was “growing momentum” to pull the various investigations together into an overarching inquiry.

Labour’s shadow home secretary Yvette Cooper has called for a “wide-ranging review” to ascertain how abuse claims were handled by the government when they were first put to the Home Office.

“Any stones left unturned will leave concerns of institutional malaise, or worse a cover-up, unaddressed,” the shadow home secretary said.

Over the weekend it was announced that a senior legal figure from outside Whitehall is to look again into a Home Office review last year of any information it received in the 1980s and 1990s about organised child sex abuse.

It is to look at what happened to a dossier of abuse claims reportedly passed to then Home Secretary Leon Brittan in the 1980s by the late Tory MP Geoffrey Dickens.

Lord Brittan said he handed the papers to officials – but their whereabouts are currently unknown. 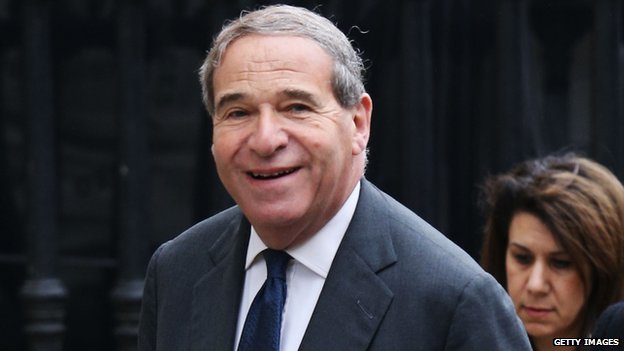 In a separate development, the BBC has seen a written account by the former leader of a pro-paedophile campaign group who claims he stored material at the Home Office while working there as an electrical contractor in the late 1970s and early 1980s.

A Home Office spokesman Mrs May’s statement would address: “The Home Office’s response in the 1980s to papers containing allegations of child abuse.

“And second, the wider issue of whether public bodies and other institutions have taken seriously their duty of care towards children.”

On Sunday, former Conservative cabinet minister Lord Tebbit said there “may well have been” a political cover-up.

Lord Tebbit, who served in various ministerial roles under Margaret Thatcher in the 1980s, said at the time people had an “almost unconscious” tendency to protect “the system”.

Last year’s Home Office review found 527 potentially relevant files which it had kept, but a further 114 were missing, destroyed or “not found”.

Among the files found, there were 13 pieces of information about alleged child abuse, the Home Office’s top civil servant Mark Sedwill said in a letter to the chairman of the Home Affairs Select Committee.

Nine of those 13 were already known or had been reported to the police. They included four cases involving Home Office staff, Mr Sedwill said.

The remaining four items, which had not been previously disclosed, have now been passed to police, Mr Sedwill added – although a Home Office spokeswoman said “now” meant during the 2013 review, as opposed to at the time the allegations were received.

The Metropolitan Police declined to comment on the Home Office files but said it was “assessing information” as part of Operation Fairbank – set up in 2012 after Labour MP Tom Watson made claims about a “powerful paedophile ring” linked to a previous prime minister’s “senior adviser” and Parliament.

Mr Watson has set up an online petition calling on the prime minister to “make amends for historic failures” by establishing a national inquiry, which has now been signed by more than 55,000 people.

Labour MP, Simon Danczuk, who has campaigned for claims of abuse at Westminster to be investigated, has described the situation as “flabbergasting”.

He told the BBC: “We know from child abusers that if they aren’t stopped in their tracks, then they will carry on abusing.

“So the potential here is for the Home Office to have lost files that could have stopped abusers from carrying on abusing children.

“I can’t think of anything more devastating than that. The public will believe that they’ve been lost deliberately in an attempt to hide the names of the people named in the files – and you can’t blame the public for reaching that conclusion.”

In this article:Sex abuse, Theresa May