The Olde Bell, Hurley, Berkshire
The Olde Bell has everything a British country inn should have – roaring fires, an atmospheric bar and a wonderful restaurant with a top-notch, seasonal menu focusing on traditional British cuisine. The rooms are cosy yet contemporary, with superking beds, state-of-the-art tellies and big bathrooms – and there’s an idyllic village right on your doorstep. For this year’s Valentine’s package, you get overnight accommodation in a classic double room, chocolate covered strawberries, a glass of bubbles, a special four-course meal and breakfast. From £229 per couple.

Edgar House, Chester, Cheshire
You get the best of both worlds at Edgar House – the luxury of a great hotel with the intimacy and informality of a small B&B. The position – by the city walls and the river Dee – feels quiet and secluded, yet the bustling and beautiful city of Chester is just 10 minutes’ walk away. Two rooms have balconies (one with river views) and the suite has a romantic copper bath in the bedroom. All have comfy beds, with rich linens. You can eat in the Library dining room or head into one of the many acclaimed restaurants in the city. £149 per couple 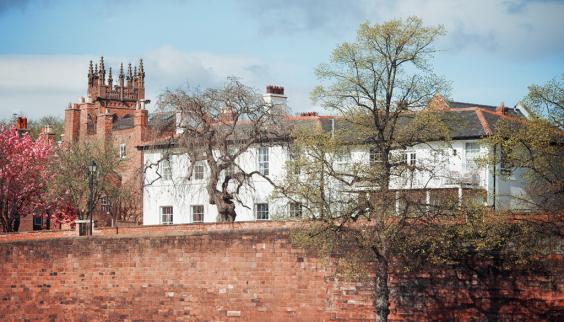 The Georgian Bathing House, River Dart, South Devon
You’ll hear nothing during your stay here, save the soothing sounds of the river below, along with passing boats and the occasional seal, making the grade II-listed Georgian Bathing House a perfect Valentines retreat. Located in the Sharpham Estate near Asprington (famed for its vineyard), the self-catering property is classically decorated and hidden in the trees, overlooking the river below. You’ll need to be prepared for no TV or wi-fi and to drive down half-a-mile of rough track to approach it. £712 per week from 12th February.

The Chapel, near Silecroft, Cumbria
The bedroom alone is enough to entice lovers to this sensational little converted chapel that’s gorgeously and eclectically furnished, with a particularly impressive bathroom. Relaxing and cosy, the cottage boasts a wood-burning stove, DVD player and a well-equipped kitchen. It’s quiet and remote, with great views of the Whicham Valley, Black Combe Fell, and the Coniston fells, and it’s also well placed for exploring the coast and western lakes. £262 for three nights over Valentine’s weekend.

The Scarlet Hotel, Newquay, North Cornwall
This adults-only eco-hotel is one of the best, and most imaginatively designed, hotels in the UK, with impressive views out to sea and individually styled rooms, many with baths in the bedrooms, and all with powerful rain showers. There are plenty of dazzling large spaces in which to chat, and smaller ones to relax, including a “deep relaxation” room where you can swing in a hanging, cushion-filled canvas pod. The ayuvedic spa and outdoor terraces, including clifftop hot tubs, are to die for and the restaurant serves modern European cuisine. From £250 per couple.

Celtic Manor, Newport, Wales
This luxury resort hotel is not for couples after quaint or chic surroundings miles away from anywhere, but it couldn’t be easier to get to (minutes from the Severn Bridge) and behind the rather obtrusive exterior, it is fabulous, with great food (Terry M is particularly romantic), a surprisingly tranquil spa with treatments to die for and no end of activities on offer, including golf. The service is great, even when it’s busy, and their Valentine’s package enables you to upgrade to their new Signature on Six area (which has been refurbished for couples looking for a quieter break, and which includes access to the adults-only Signature Lounge) or one of the romantic luxury lodges. From £266 per couple for dinner, B&B.

The Ruin, Grewelthorpe, Yorkshire
The Landmark Trust has no shortage of unusual self-catering properties around the UK that sleep just two people and we love the fact that they are sensitively renovated to bring out original features and have no telly or wi-fi. Our favourite for Valentine’s isThe Ruin, a little pavilion perched above a steep wooded gorge and set within the gorgeous 18th-century garden at Hackfall. In fact, you’ll be hard pushed to beat the views of North Yorkshire, and the three rooms inside are magical. £482 for three nights over Valentine’s weekend

The Lake District Love Shack, Ambleside, Cumbria
Shack by name, but definitely not by nature, this architecturally designed wood-and-glass cabin is stunning, with fabulous interiors consisting of a mix of furniture from all ages and packed with all the mod-cons, including remote-control blinds, should you not wish to leave for the entire duration of your stay. Thanks to the views across Lake Windermere, you may well come to that decision. Still managed by the people who built it, this is a real find. From £380 for four nights.

April Cottage, Old Alresford, Hampshire
Snuggle up in this characterful, listed 17th-century thatched cottage, located at the end of the village green in the delightful village of Old Alresford. It’s well-furnished and cosy, with just one bedroom with a four-posted bed, and if you do decide to venture out, there are shops and a great pub within walking distance, as well as some fabulous walks and cycling routes. Historic Winchester is just eight miles away. £335 for three nights over Valentine’s weekend. 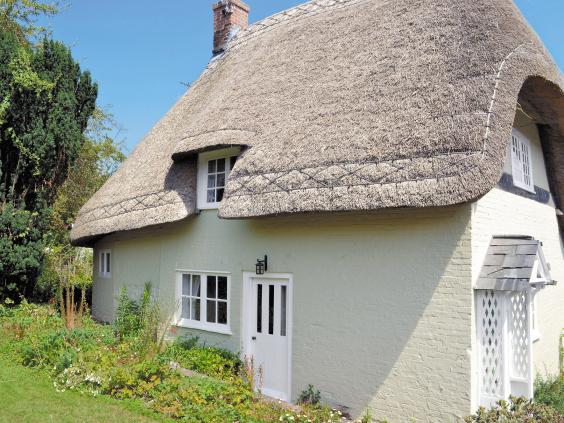 Bath Mill Lodge Retreat, Bath, Somerset
These self-catering lodges are designed to five-star standards and are tucked away in a leafy location on the outskirts of Bath (a 10-minute drive), meaning that you can head into the city by day, but escape the noise at night. Each lodge is named after one of Jane Austen’s fictional country estates and there’s a babbling brook running through the site, as well as a decent on-site bar and bistro for those who don’t want to head out at all. £179 for three nights over Valentine’s weekend.

Ynyshir Hall, Eglwysfach, Wales
This 16th-century mansion hotel in mid Wales is surrounded by the Cambrian mountains and close to the striking coastline, with plenty of fabulous local walks. Inside the five-star hotel itself, each of the 10 bedrooms and suites is named after a different artist, with individual and wow-factor decor, huge beds and nice touches like a decanter of sherry. The Michelin-starred food in the restaurant, under head chef Gareth Ward, is staggeringly good. From £435 per couple including five-course dinner and breakfast.

Old Harbour View, Weymouth, Dorset
With only two bedrooms, this B&B feels cosy and private – the ideal place to escape for Valentine’s and yet the bustling old harbour is just outside. The house, built in 1805, is just12 feet wide, but it feels roomy and light inside, with thoughtful furnishings and welcoming hosts. Take your pick from the local seafood restaurants and boat trips and enjoy Anna’s homebaked bread for breakfast. If you want to venture further afield, there are plenty of places to visit, including Bennetts Water Gardens. £98 per couple.

The Old Fish Cellar, Mousehole, West Cornwall
Mousehole is the last place on earth you’d expect to find an open-plan, urban-themed apartment filled with black, grey and white shades, not least because it’s one of the prettiest and oldest harbour towns in West Cornwall. Yet The Old Fish Cellar works perfectly, probably because it still manages to capture the property’s quaintness and sense of history. If you can tear yourself away, explore the charming cobbled streets with interesting shops and galleries and great restaurants. £522 for three nights over Valentine’s weekend. 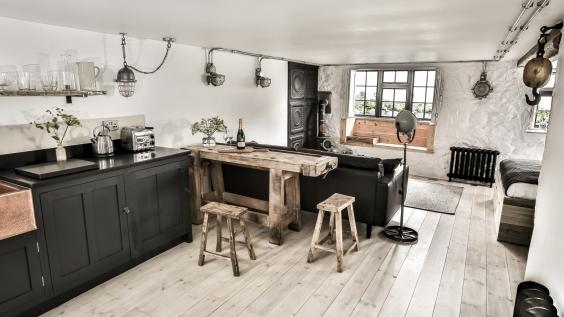 The Inn at Whitewell, near Clitheroe, Lancashire
The Forest of Bowland, with its rich meadows and hills, is picturesque all year round, and the views of the scenery are particularly spectacular from this laid-back riverside inn, which dates back to the 14th century. There are plenty of deep sofas to relax into around the roaring fire, and seeming endless beautiful antiques, including in the individually designed rooms. You can eat in either the restaurant or the bar, both of which have excellent homemade food, all sourced locally, and a good wine list too. From £128 per couple.

Two Dart Marina, Dartmouth, Devon
Anyone familiar with this scenic harbour town will know that this is a pretty awesome address. Located in the historic port of Dartmouth, Two Dart Marina has amazing views from the French windows and a stylish open-plan living room. Better still, guests can enjoy the facilities of the Dart Marina Hotel, including the spa and restaurant. The town itself is packed with pretty narrow streets, full of independent shops and restaurants. £900 per week from 12 February.

The Sanderson, London
This legendary London hotel is not for traditionalists; it is minimalist, contemporary, sexy and witty, as well as being fabulously varied. The bedrooms are stunning in their simplicity, with beds set away from the wall and white flowing curtains dividing the bathrooms from the rooms, while the food in the continental brasserie is seasonal and imaginative. Enjoy a glass of champagne in the Perrier-Jouët Winter Garden on the heated terrace – it comes with a special chocolate pairing. Also included in the Valentine’s package is breakfast in bed and late check-out so you can laze the morning away. From £382 per couple.

Castle House, Hereford, Herefordshire
This feels more like a lovely big house than a hotel. It has a pretty terraced garden which runs down to the old Hereford Castle moat, making it an ideal location to explore the city centre. Every room at Castle House is individually decorated and there’s a separate townhouse, Number 25, if you want more privacy – although we’d recommend the Charles II Suite, which boasts three large French windows with views over Castle Street and the cathedral. There’s no shortage of walking and shopping opportunities close by and the food and service are both fabulous. From £250 per couple over Valentine’s weekend, including champagne on arrival and a five-course set menu and breakfast.

Fasque Castle, Aberdeenshire, Scotland
There can hardly be a more romantic setting than a castle, and for one night only, this award-winning 19th-century one (normally only available for weddings and other private functions) is offering couples the chance to have an evening of champagne and canapes, followed by a four-course dinner and a night in one of the 19 lavish rooms. After dinner, guests will be treated to live music, and throughout the stay, couples have use of the 400 acres of rolling countryside. £499 per couple for dinner, B&B

Ragdale Hall, near Melton Mowbray, Leicestershire
A spa weekend is the ideal getaway for couples who want a truly relaxing break. This top-notch yet unpretentious destination spa hotel offers first-rate food, with vast and impressive facilities, restful rooms, and rolling countryside to admire. From £360 per couple for two nights, including all meals, bubbly, all facilities and a 50-minute treatment each.

Stoke Park, Stoke Poges, Buckinghamshire
This 18th-century mansion house, nestled in 300 acres of beautiful parkland, lakes and gardens, has a real wow factor, yet remains relaxed thanks to the fact that it doubles up as a private country club. Although it’s not cheap, this year’s Valentine’s package is well worth the dosh for a really special stay, including a four-course dinner, bottle of champers and a Valentine’s-themed cake in your room. You get late check out too. From £267 per person.