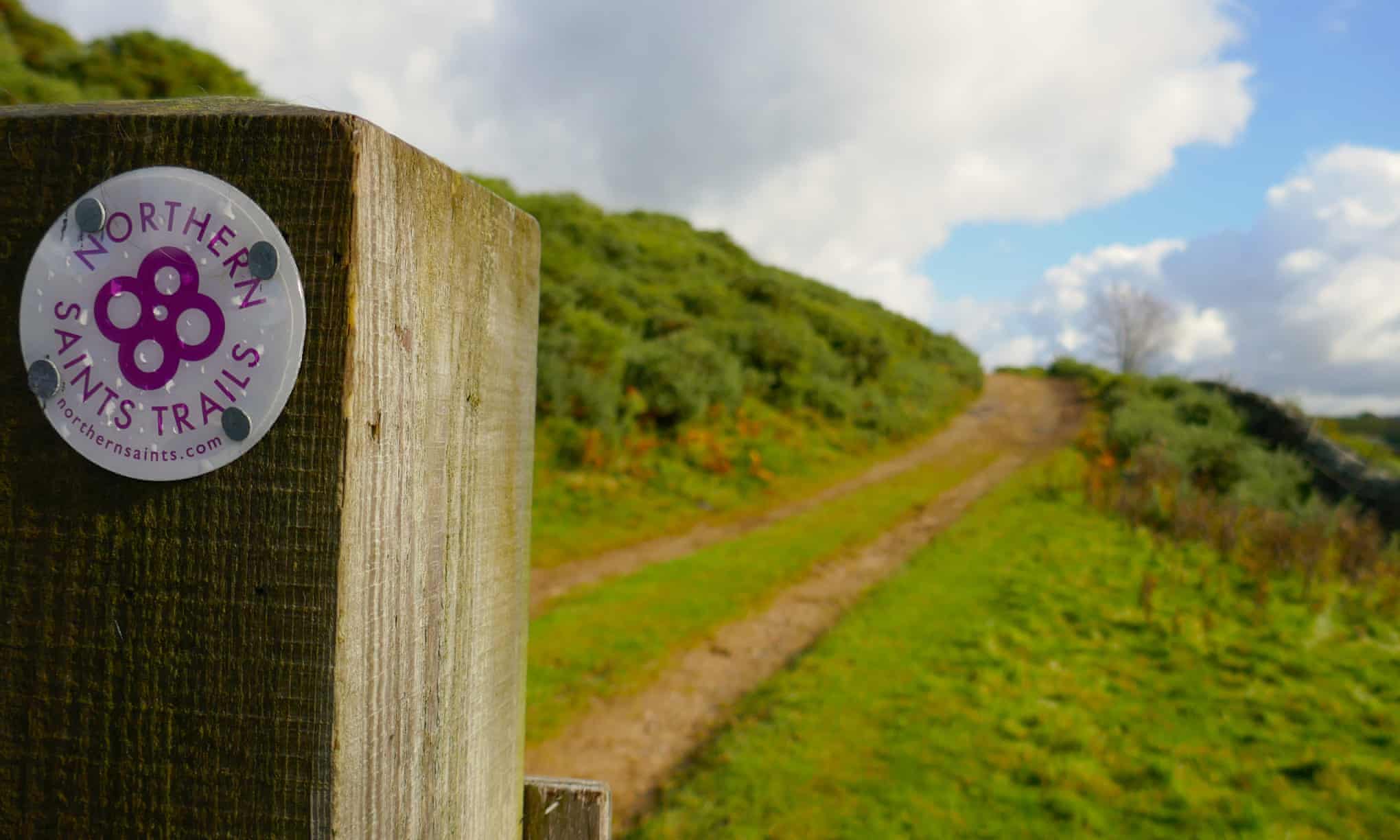 The morning sun shines through the tall windows of Hexham Abbey. It brightens the rich blue and green of Saint Cuthbert’s robes and the crimson of St Oswald’s tunic. St Wilfrid is depicted holding plans for the original abbey he built here in AD647, using recycled stone from a Roman fort.

Open again after closing in lockdown for the first time since the Black Death, the abbey is full of carved faces and painted medieval panels showing gilded saints and dancing skeletons. But I turn my back on its golden stone and an hour or two later I am walking among autumn woods and waterfalls, the town far behind me and the open moors ahead.

I’m spending four days on one of the Northern Saints Trails, a new network of six long-distance paths spiderwebbing across the north-east of England. Inspired by ancient pilgrimage routes, they were due to launch in March 2020 and showcase regional attractions, divine and secular. The Angel’s Way passes Antony Gormley’s Angel of the North, the coastal Way of the Sea starts from Warkworth Castle, and the urban Way of Learning from the Venerable Bede’s monastery near Jarrow. I’ve been reading Bede’s History on my kindle; he often mentions widespread pestilences.

The 45-mile Way of Light from Heavenfield to Durham sounds suitably uplifting for dark times and remote enough for a plague year. Like three of the other routes, it is drawn magnetically towards Durham’s Norman cathedral, to end at the candlelit shrine of Saint Cuthbert. A seventh-century hermit and bishop, Cuthbert is a favourite among northern saints: eagles fed him, otters dried him with their fur (after he spent a night in the sea, praying) and he sheltered the Farne Islands’ eider ducks (nicknamed Cuddy ducks after him).

My walk officially starts a six-mile taxi ride north of Hexham (where I’m spending the night) at Heavenfield, a battle site close to Hadrian’s Wall. I explore the tiny hilltop church dedicated to Saint Oswald, who won a battle here and reunited Northumbria. The views across the Tyne valley are wide as I follow the route back down, and as dusk falls, bats flicker in roadside yew trees and the floodlit abbey impresses.

The next morning I buy an apple, some flapjack and wodge of Northumberland Nettle cheese at Hexham’s Tuesday market to eat later on a log in the forest, and continue south. The route is easy to follow: though it’s only sporadically waymarked, detailed directions are available online to download. The landscape changes as I walk: there are fields edged with harebells and hawthorn, woods full of ferns, falling streams and cascades of green-gold beeches. There’s a lovely couple of miles along Devil’s Water, a tributary of the Tyne, past rust-brown rapids, a waterfall and the elegant ruined arches of 17th-century England’s largest lead-smelting mill. The sighing conifers of Slaley Forest give way abruptly to heathery Blanchland Moor and the resinous darkness is replaced by a wide, wild sky and bands of slanting rain. Curly horned ewes gaze curiously at a bedraggled passerby.

Tonight’s hotel, with its log fires and deep baths, is a perfect foil to the blustery fells. I’ve found cheap B&Bs for other nights but, in isolated Blanchland, the luxurious Lord Crewe Arms is the only option; it serves warm, homemade sourdough and roasted local partridge. Philip Larkin used to dine here, WH Auden played Brahms on the piano, and a Jacobite general once hid in the fireplace.

Next day is even more spectacular, with huge views and miraculous sunshine. Blanchland’s idyllic village square is the monastic court of a former abbey, now with a post office in the old gatehouse and chickens in the churchyard. It’s surrounded by the North Pennines AONB, an area I’ve rarely visited before but will definitely come back to. I cross the Derwent into County Durham and climb on to the moors. Yesterday, I saw just two distant dog walkers in 12 miles of walking. This morning, I’m completely alone with capering rabbits, scolding grouse and a solitary circling buzzard.

As I stumble over boggy tussocks up cloud-shrouded slopes, I realise that one well-worn boot has started to let in water. Carrying everything I need and walking for several hours every day is both liberating and tiring. The track narrows to a path, which becomes a stream, and I nearly slip off the stepping stones into fast-flowing water.

At lunchtime, I make it to Edmundbyers, with its popular village pub and youth hostel. After another cascading burn and a climb through damp, aromatic bracken, there’s a quicker section along country lanes, winding through the Derwent Gorge nature reserve and ancient oak woods. Gold-leaved silver birches line the tracks into Castleside village, where I’m staying the third night.

The first hazy glimpses of Durham cathedral come on the epic final day, near a village called Quebec. It’s a time-honoured pilgrims’ viewpoint and the lanes and fields nearby have names like Laude and Salutation. Nearby, the historic houses, chapels and gardens of Ushaw once housed a Catholic seminary. Now, they’re a creative hub, open to visitors, with the Way of Light following permissive paths through the grounds. At their heart, Saint Cuthbert’s chapel, originally designed by Augustus Pugin, gleams like a jewel. After coffee, I set off through a marshy willow plantation towards the city. Limping into the glowing cathedral a few hours later, I spot a stained-glass Saint Cuthbert surrounded by ducks. My holey boot feels like a badge of honour.