The children’s father, Gary Clarence, was in South Africa at the time of the deaths

A mother who admitted killing her three young disabled children will not face murder charges.

The Crown Prosecution Service (CPS) has accepted Tania Clarence’s guilty plea to manslaughter on the grounds of diminished responsibility, the Old Bailey has heard.

The children, who all had type 2 spinal muscular atrophy, were found at their home on 22 April.

The prosecution said Mrs Clarence killed her three-year-old twin sons Ben and Max and daughter Olivia, aged four, because she was depressed and wanted to end their suffering.

Mrs Clarence, who was not in court, will be sentenced on 14 November when she is likely to face a hospital order.

Jim Sturman QC, defending, told the court: “This offending did occur whilst Mrs Clarence was suffering from an abnormality of the mind.

“She was manifesting stress throughout the life of the children by their suffering and caring for three children with this condition was exhausting, distressing, debilitating and turned out to be overwhelming.” 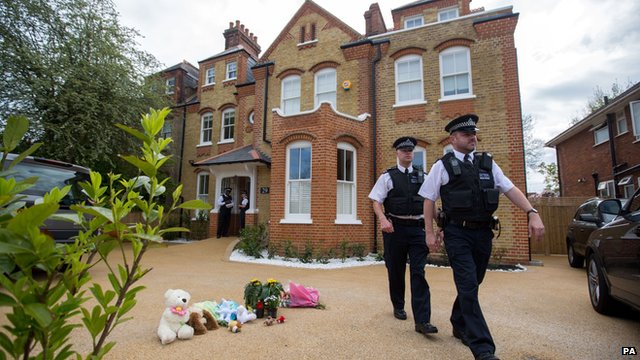 The children were found at their home on 22 April

Prosecutor Zoe Johnson QC said Mrs Clarence had previously believed that the quality of her children’s lives was more important than their longevity, which was “entirely understandable”, she said.

BBC correspondent Matt Prodger, who was in court, said Mrs Clarence could “see no hope for the future” and could no longer cope with caring for her children.

The defence asked that she should serve any sentence in hospital, he reported.

At a previous hearing, the court heard that Mrs Clarence confessed to killing three of her children at her home.

She then tried to kill herself.

The mother-of-four was discovered bleeding and crying by her distraught nanny and a neighbour, who had gone to the home after becoming concerned for her safety.