If you scribble down a list of all the British TV detectives you can think of, past and present, the sad truth is that only a handful are played by black actors. It’s a fact that isn’t lost on Tala Gouveia, who occupies one of the titular roles in the ITV crime drama McDonald & Dodds, which is about to return for a second series.

“There’s Luther, and Thandie Newton in Line of Duty … I can’t think of many more,” says Gouveia. “It really means a lot to me to be a woman of colour in a traditional British detective show, and for my character to be the boss. Actually, it’s one of the big reasons I wanted to do the series.”

Gouveia plays impatient, instinctive DCI Lauren McDonald, opposite Bafta winner Jason Watkins as bumbling but brilliant DS Dodds. She’s a city mouse, struggling to adapt to the sleepy pace of life in beautiful Bath, and he’s her secret weapon – an unassuming underdog ready to strike. There’s nothing new about a mismatched detective duo solving crimes on ITV on a Sunday night, but audiences have lapped it up.

“It’s exciting to be back and so great to know the show resonated with people,” says Gouveia. “We wanted to make an entertaining, comforting series that people would really enjoy, especially when the news is so relentless.”

The daughter of two theatre actors, Nottingham-born Gouveia always knew she wanted to perform. At the age of 16 she briefly flirted with the idea of “a proper job” but followed her heart, training at prestigious drama school the Bristol Old Vic.

“They gave me resilience and prepared me for how tough the business can be,” she says. “They put you in mock auditions, where they made notes with scratchy pencils and straight faces. That may have been overkill – in the real world most of the casting directors are actually lovely and the pencils aren’t scratchy!”

Her first TV gig was a small role on EastEnders, and she had to wait nine years to lead a series. When the script for McDonald & Dodds arrived on her doormat she had no idea it would be such a life-changing opportunity. “My agent kept putting me up for detective roles and I never believed I’d get them. I’m a bit scatty so I never really saw myself as a policewoman!” she says.

“But I loved the character of McDonald and when I did the chemistry read with Jason I knew it would work. Jason’s been so encouraging and supportive. It was daunting – not just wanting to do a good job but realising that if Jason and I didn’t get these roles right, we were never going to get a second series and the whole thing falls apart. You look round the set at everyone and realise they’re relying on you.

“The show used to be called Invisible. When they changed it to McDonald & Dodds I thought: ‘Phew, it’s going to be harder to sack me now!’”

But Gouveia has found some of the social media responses unsettling. “People tweeted that our show was ‘woke’ just because it had me in it,” she says. “My family took my phone away from me eventually – there were lots of lovely comments from people who loved the show, but your brain just focuses on the negativity.”

Does she believe the colour of her skin has held her back in her career? “I think so,” she says quietly. “To begin with, I spent so much time concentrating on the fact that I was a woman and how that limited me, I didn’t even dare to think about being a black woman.

“I didn’t get my first audition because my boobs weren’t big enough – welcome to the business! I used to go up for a lot of parts that were written specifically for black people, and if they weren’t then the role normally went to a white woman. I think that’s changing slightly, there are more parts to go for now.”

But getting the job is just the start of the story – Gouveia’s daily experiences on TV sets reveal just how ill-equipped the industry is to embrace the diversity it needs. “There are things you just get used to,” she tells me. “On past jobs I would often bring specific curling tongs to set each day because I knew they wouldn’t know how to deal with my hair in its normal state, and the answer was always tonged curls or straightening. Then you wonder why you’re getting up at 5am to do this, when we could work out how to do my hair in a more natural way. It was such a relief to wear my hair natural for McDonald & Dodds. The smallest things can make such a difference to your sense of self … and the condition of your hair!

“I’m used to getting on set and being the only black person there. A lot of the time I’m just so used to it, it doesn’t resonate. It’s not until you start to notice a change that you realise how strange it has been for so long. McDonald & Dodds was the first time I’ve worked with a black director on screen.”

Killing Eve star Sandra Oh gave a similar account in an interview with Variety last year, saying she had grown accustomed to being the only Asian person on set, but pointing out that the UK was “behind” the US when it came to equality. But aren’t we always hearing about the push for diversity in the arts? What’s the delay, and are we wrong to find hope in series like Bridgerton and I May Destroy You? 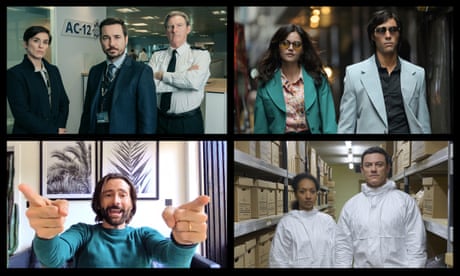 “Things are changing, especially with the Black Lives Matter movement, but it’s not happening very quickly,” says Gouveia. “Recently people have started thinking more about diversity among the performers, but not so much about who is behind the camera. It’s also about the people who have the big power in the media, a lot of whom are white, cis, heterosexual, able-bodied men who live in London. We tend to have a lot of stories about these kinds of people, and it doesn’t represent our country.

“Think about LGBT+ shows – we had Queer as Folk years ago and now we’ve got Its A Sin, which is great, but in between it’s been a really slow process. We had the gay best friend, and then there were lots of great independent LGBTQ+ films but we’re not really seeing this in the mainstream. We’re not seeing disabled actors either. There needs to be shift.

“We need to fully understand the need for diversity and insist upon that change. I want to see myself represented sometimes and think: ‘Oh, that’s me.’ But I also want to watch shows about people that are nothing like me. If we keep making TV about certain people, we strengthen the idea that these are the most ‘universal’, ‘normal’ stories to tell. And I just don’t think that’s good for anyone.”