‘Don’t wash. Don’t shave. Don’t use soap. Your body’s natural oils are protection. Remember, don’t sweat and don’t get wet. It was 28 yesterday.“ Wilderness guide Roger Nilsson, like most in Swedish Lapland, judges the ”minus“ before winter temperatures to be long redundant.

It’s dark outside and I’m fresh from snowshoeing in the pine forest, a shakedown for my cold weather gear. We’d dug in the snow to set fires, bubbled hot chocolate, and allowed instinct to determine direction through the maze of trees. As Roger says: “This isn’t about survival. It’s a chance to learn how to be in the cold.” Now I fumble with clasps and straps, shedding outer clothing to soak in warmth from the lodge’s crackling wood fire.

“Tomorrow we’ll travel almost 70 kilometres by snowmobile. We must help each other. Every 20 minutes it’s important to check for frost nip.” I retreat to my warm bed, the implications of life at temperatures that make a domestic freezer sound as attractive as a Balinese beach resort are just sinking in.

Our starting point is Pine Bay Lodge, close to Lulea on the Gulf of Bothnia, and just below the Arctic Circle. At around 900 kilometres from Stockholm, even Swedes consider Lulea to be the frozen north. Facebook chose the city to site its only data centre outside the US. The company’s darkly humming servers benefit from political and geological stability, cheap hydroelectricity and, not least, a naturally cooling climate. Here too, beyond the freshly marked ice roads to the islands of the Bothnia archipelago, Sweden’s steel industry stokes the skyline with clouds of steam. 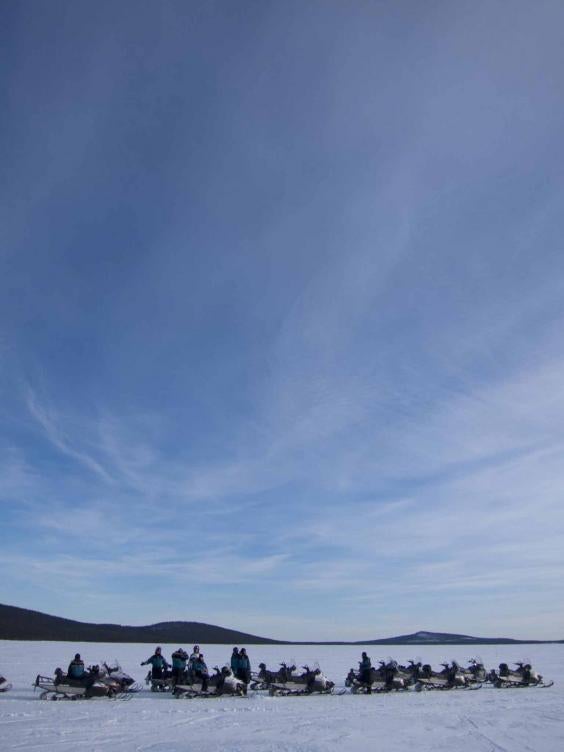 The snowmobile train prepares to set off

The country’s northerly, ore-rich geology has long been exploited. The world’s largest underground mine, at Kiruna, is linked to Lulea’s port by 340 kilometres of British-built railway. Interestingly, right now the town of Kiruna itself is in the process of being abandoned and re-situated in order to access valuable ore deposits beneath its houses and streets. From the 17th century, before the railway, ore was carried by a Sami-led renrajd (procession) of eight to 12 reindeer, each dragging boat-like ackja sleds of up to 170kg.

Marginalised across their Arctic northern range, the Sami in Sweden fared no better than those in Finland, Norway or Russia. Effectively they were forced labour for the Malmens Vag ore trail which operated until the late 19th century, extracting a brutal toll in lives from a nomadic people who had little concept of national boundaries, harboured few economic aspirations and, for the most part, just wanted to be left in peace to herd their reindeer.

On foot, the journey from the Gallivare mines along the frozen Rane river to its mouth at Stromsund took a week. We plan to see just a small section of it on a four-hour snow-mobile trip from the lodge to Aurora Safari Camp, upstream on the Rane. It’s 9.30am, the sun has been up for half an hour and will set again before half past three. In front of the lodge, the lake’s snowy surface melds with the grey half-light of a long, northern winter. The ice is a reassuring 70cm thick, more than enough to bear the snowmobiles. Roger looks at my glasses. “Can you drive without them?” I can, just not so well … “Better to take them off, they’ll just ice up.”

Out on the ice we’re soon hitting 50km/h. My visor ices up. Lifting it, a stream of cold air makes my eyes water. Roger looks over his shoulder and slows. Our caravan of five snowmobiles is already strung out. He steps on to the ice and swings his left leg. “It’s gone dead. This encourages the blood.” I join Roger in swinging limbs. “There are 1,352 islands in the gulf,” he says. It’s a white desert of sea ice with oases of islands.

Standing with Roger, I punch my palms in a vain attempt to keep cold at bay. They’re Swedish Army gloves, he explains. My hands remain resolutely cold. “I did my time in the air force. Now it’s finished, the national service.” Swedes, in common with their neighbours, have felt Russia’s recent muscular expansion on their borders keenly. Recent sightings of errant submarines in Swedish fjords suggest their concern is more than paranoia. Placing a carefully formed wodge of tobacco inside his bottom lip, Roger pulls up his face guard and starts his motor. “Come on. Unless we want to drive in the dark.”

At the mouth of the Rane we halt again next to a lone figure on the ice. Karl Ericsson is marking the trail with brushwood stakes. “Keep well apart. The ice is thin,” he jokes, waving us off with his chainsaw. Negotiating occasional ice-bound fishing huts, big enough to accommodate a stove and two fishermen on friendly terms, we navigate the river’s meanders. On the forested bank, Roger points out two birch trees, chips of fresh wood surrounding their almost severed trunks. Swelling beneath the snow the substantial mound of a beaver lodge identifies the natural woodsmen. Further on we leave the river, cutting through trees, alternately crouching and standing. Two elk are surprised by our arrival. Are they deaf? All legs and head, the animals’ loping gait takes them beyond view into the snowy silence of the forest.

Emerging on to the river, I follow Roger’s tracks towards a promontory where a simple shelter overlooks a fireplace. “Lunch,” he announces. Roger deploys kindling and by the time I return with two snow-stuffed kettles he has the fire roaring and has started to cook. “Blimey. How’d you do that?” I ask, expecting some incendiary Sami lore involving birch bark and whittling. Roger looks at me wryly. “The easy way,” he says, nodding towards a can of barbecue lighting fluid.

I remove my frozen balaclava and thread it kebab-style on to a stick near the flames. It’s too cold to sit. We keep moving, standing uneasily on reindeer skins. “Your body uses about 30 per cent more energy to stay alive in these temperatures,” says Roger. Certainly the gently bubbling reindeer, chanterelle and potato stew has 130 per cent of my attention. Roger shows me his knife. “There are competitions for knife making. The guy who won last year made this. Its handle is mammoth bone.” I examine the blade. It’s Swedish steel. It’s one of the two things you need to survive in the nature, he explains. The other is your brain. Topped up with satisfyingly gritty fresh coffee we break camp.

Looping through deserted villages of red-painted summer homes we cross a snowy road. Roger turns, and in military style, points two fingers at his eyes, then to the left and the right. There’s no traffic. It’s too cold even for Volvos. On the river ice again, the sun has set and colour drained from the landscape. Icy droplets hang from my eyelashes. Around my nose and mouth my balaclava has again frozen solid. To the right I see the bizarre sight of an ice-henge. Roger steers towards it. “What’s this?” I ask. “It’s where you’re spending the night,” says Roger.

Among the trees a fire is visible. Camp manager Leif Wallerstrom welcomes us to the Sami-style tents of Aurora Safari Camp. “We usually offer a drink outside, but I think today it’s better inside.” No one disagrees. In front of a blazing stove we defrost over wooden mugs of hot lingonberry juice. Roger joins us briefly to say farewell – he’s retracing our tracks. Typically direct, he concludes: “I will drive more quickly and take less time.”

Overnight, my alarm sounds every two hours, a reminder to feed the woodburner. My cold nose serves as further encouragement. Venturing outside at 3am, I hope to catch the aurora. I stand alone by the frozen riverbank. The stars are hidden by grey cloud. Around me snow falls silently like ash.

We’d covered only a portion of the Malmens Vag, employing state-of-the-art machines and modern cold weather clothing. However, the insight served to bestow respect upon the generations of Sami who, centuries earlier, passed this way. The ore trail fell into disuse after 1888, upon the completion of the Malmbanan railway. But conflict between the mining interests and Sami land rights continues to this day.

In this article:Iron Trail, Sweden