The evangelical church’s pastor and founder, Kong Hee, was jailed for eight years – others received between 21 months and six years.

All denied the charges – the church had supported them during the trial.

State prosecutors said before sentencing it was “the largest amount of charity funds ever misappropriated in Singapore’s legal history”.

Known for its slick image and wealth-focused brand of Christianity, City Harvest Church (CHC) has some 17,500 members in Singapore and branches around the world.

In 2002, its launched what it called the Crossover Project – a scheme to evangelise through Ms Ho’s music career. 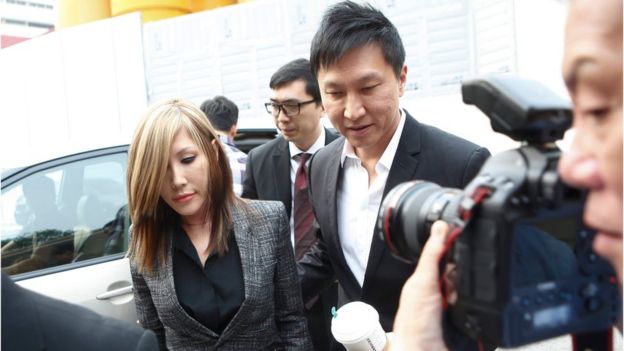 The hope was that songs like China Wine – a tune with rapper Wyclef Jean depicting Ms Ho as a Chinese exotic dancer in Jamaica – would help spread the gospel.

A church-backed music production company aimed at helping her achieve mainstream success in the US was left with millions of dollars in losses when the project failed.

The six were convicted on 21 October of misappropriating S$24m of church funds for the music project, and using another S$26m in an attempt to cover their tracks.

They were found guilty of various counts of criminal breach of trust and falsification of accounts, although the judge accepted that there was no evidence of “wrongful gain” by the defendants themselves.

That lack of personal financial benefit from the fraud meant the judge did not impose the maximum sentences of up to 20 years, local media report.

Ms Ho herself was not prosecuted in connection with the case and did not attend Friday’s sentencing.

She recently took over leadership of the church.