I always wondered what it would be like to meet the President. I imagined bodyguards and flashing cameras, perhaps a brass band and some flag-wavers. But when the moment came I was standing at the far end of a cornfield, thrusting my palm into the thick darkness of the night in the hope it might shake somebody’s hand. The fanfare was the quiet warble of a tree, the paparazzi the billion stars blinking overhead. This is Sark: Europe’s newest democracy and – as of this weekend – home to the world’s newest observatory.

Just three miles long and one mile wide, Sark is pindropped in the English Channel somewhere between Guernsey and the Normandy coast, but spiritually it falls far closer to the worlds of Downton or Dibley. Remarkably, Sark remained Europe’s last feudal state until 2008, when the balance of power shifted from the long-reigning Seigneur to the island’s parliament, the Chief Pleas.

Feudalism may have been crossed off Sark’s “things-to-modernise” list, but the pace of change remains slow here. As does the literal pace of the island. The tractor bus that ferries people from the harbour to the hilltop isn’t a touristy gimmick; cars are outlawed here. Even the ambulance and fire engine operate on a towed-by-a-tractor basis. The rest of the 600 population makes do with bikes – there are no paved roads or street lights, either. 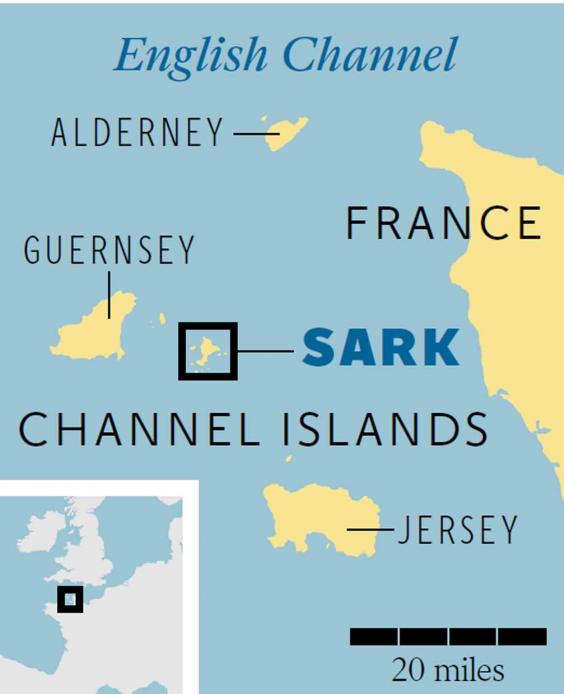 The result is that Sark has one of the darkest and clearest night skies in the world. Officially. In 2011 the International Dark Sky Association named Sark the world’s first Dark Sky Island. And in response to a recent swell of interest, the Sark Astronomy Society (SAstroS) has spent the past year raising funds – jumble sales and all – to build an observatory, which opens today. Last weekend, I became one of the first to put eye-to-telescope and witness Sark’s dark skies up close.

“What was that?!” In the corner of my eye a flash of light disappeared as quickly as it emerged.

“The 8.40 to Madrid,” was the response, whispered from the darkness. Surely not. I know a plane when I see one. I kept gazing at the same patch of sky, just above the Plough constellation, determined to glimpse the flash again. Minutes later, a bright pearl swooshed through the darkness. A shooting star – one of many I would see tonight.

I was craning my neck alongside a handful of SAstroS members, including the moustachioed President of Sark, Reg Guille. The sense of excitement was as palpable as the sweet sheddy smell of the observatory. After months of planning and a week of intensive building, the final screws had been tightened just a few hours earlier that day. While we stargazed here for the very first time, the three Norfolk-based builders were drinking a well-earned pint in the island’s only pub.

Perhaps it was luck, or perhaps it was the doings of SAstroS chairman Annie Dachinger (who proudly introduces herself as a white witch), but we were treated to an explosively starry sky, almost more silver than black in its busiest patches. Once my eyes had fully adjusted, the cloud that streaked across the centre of the sky revealed its true identity as the Milky Way. Occasional satellites drifted by, falling in and out of focus.

The Sarkees stargazers talked passionately about the Seven Sisters cluster and told me of the seldom-seen Andromeda galaxy – on the brink of visibility tonight – but as an amateur I was just as happy pointing the powerful telescope straight upwards into the depths of our own galaxy and seeing what I could find. There aren’t many observatories where you can take control of the equipment like you can here.

Annie joked that the observatory “isn’t quite on the same scale as Jodrell Bank”, but anything bigger than this would be out of keeping with the rest of the island.

After a couple of hours of stargazing we pushed the roof back over the observatory and somebody draped a duvet over the telescope to protect it from the cold. The locals made their short journeys home in the silence of the night. And what silence. You won’t even hear the sound of jangling keys here – nobody bothers with door locks in Sark.

With our torches switched on, a low mist was exposed on the field and the stars all but vanished in the artificial glare. I turned to take a final look at the observatory and in the distance I could see the President of Sark’s bicycle light, bobbing alongside a hedgerow. We had spent the evening gazing into the cosmos, but Sark had felt like a world apart.

In this article:dark sky island, Sark