Government borrowing rose to £11.8bn in September, an increase of £1.6bn compared with a year earlier, according to the Office for National Statistics.

Economists were forecasting that borrowing would hold steady.

The latest figures are a set back for Chancellor George Osborne, who in March pledged to cut the budget deficit by more than 10% over the next 12 months.

Between April and September borrowing was £58bn, a rise of £5.4bn compared with the same period last year.

That is an increase of 10.3%. Last month’s figures showed borrowing between April and August was 6% higher than a year earlier.

Plans to reduce the deficit are getting further off track. The government has so far borrowed 10% more this year than it did at the same time last year. It means the chancellor has no room for manoeuvre as he prepares his pre-election tax and spending plans, due to be announced in early December.

There were some bright spots for him – stamp duty is 25% up on the year – but income tax was flat, despite a record breaking fall in unemployment since last year, suggesting job growth has been in low-paid work. The deficit has come down a third since 2010, but the progress has stalled and this year is heading in the wrong direction.

“We have seen stronger growth in receipts this month, but as today’s figures show, the impact of the great recession is still being felt in our economy and the public finances,” a Treasury spokesman said.

“At the same time, we have to recognise that the UK is not immune to the problems being experienced in Europe and other parts of the world economy.”

Economists say the borrowing situation will limit the government’s options in the run-up to next year’s election.

“The chancellor will be forced to acknowledge in December’s Autumn Statement that the fiscal consolidation is not going to plan, limiting his scope to announce pre-election sweeteners.” 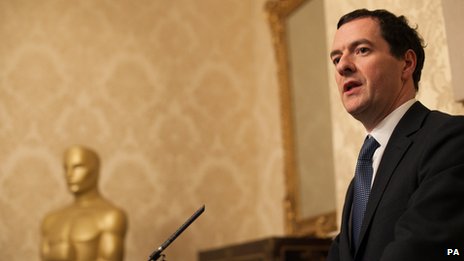 Weak income tax receipts are behind the rising dependence on borrowing, in the first half of the fiscal year receipts were up just 0.1% compared to the same period last year.

“Income tax receipts have been held back by weak earnings growth and the fact that much of the employment growth has been in low paid jobs or in self-employment,” said Howard Archer, chief UK economist at IHS Global Insight.

Reacting to the borrowing figures, shadow chief secretary to the Treasury, Chris Leslie said: “These figures are a serious blow to George Osborne. Not only is he set to break his promise to balance the books by next year, but borrowing in the first half of this year is now 10% higher than the same period last year.”