Ice and darkness, snow and strange lights dancing across the sky. Norway’s rare and singular beauty is at its most breathtaking in winter. Travellers and tour operators have, in recent years, been discovering what Norwegians have known all along – that the long nights are no impediment to travel. There are few places that you cannot reach, even in the depths of winter, and coming here at this time opens up a world of wonder.

But it’s good to be prepared, so bear in mind that in Tromso the darkness is complete from 25 November through to 17 January, while at Longyearbyen, in the Svalbard archipelago, it lasts from 26 October to 16 February. Even beyond these dates, the sun sits just below the horizon, bathing the earth in an eerie, but magical, twilight.

Tromso has long been the centre of Norway’s winter tourism and it remains the most popular gateway. As the world’s northernmost city, it’s well placed for the Northern Lights, and is served non-stop from Gatwick once or twice a week.

In the city itself you’ll find Polaria (polaria.no; 120 Norwegian krone/£9.30), a museum dedicated to Arctic wildlife, the Polar Museum (polarmuseum.no; 60 krone/£4.70) which is dedicated to polar exploration, the dramatic Arctic Cathedral (ishavskatedralen.no; 40 krone/£3.10), a cable car that opens up glorious views (fjellheisen.no; 150 krone/£11.65; under renovation until February), and the much-loved Mack Brewery, where they’ve been warming body and soul since 1877 (00 47 776 24 580; ol hallen.no; tours 160 krone/£12). Tromso also offers the full suite of winter activities from snow-shoeing to snowmobiling, dog-sledging and skiing as well as trips out into the camps of the indigenous Sami people.

However, there’s so much more to the Norwegian winter than Tromso, which can also serve as a starting point for an exploration of Norway’s jagged coastline and its wildlife. Nature Trek (01962 733051; naturetrek.co.uk) offers a six-day tour from Tromso to Trondheim that includes birdwatching, fjords and a three-night coastal cruise for £1,495 per person. Flights extra.

Going the other way, Karasjok, deep in the northern Norwegian interior, is an important centre of Sami culture. Many of the Sami still lead a traditional, semi-nomadic way of life, migrating with their reindeer twice a year. In Karasjok, Sapmi Park (visitsapmi.no; 140 krone/£10.90) and the Sami National Museum (rdm.no; 75 krone/£5.80) are fine places to learn about these soulful inhabitants of the north, while the Sami Parliament is a striking piece of contemporary architecture that evokes a traditional tent.

Further south, the otherworldly landscape of the Lofoten Islands will become more accessible with new charter flights by Inghams (01483 791101; inghams.co.uk) from Gatwick to Evenes, with three departures: on 28 February and 2 and 6 March. The three-night Polar Express Adventure tour starts at £799 per person including flights.

Also new, Fifty Degrees North (fiftydegreesnorth.com) operates a winter tour along the classic route from Oslo to Bergen via the fjords, but with the added appeal of skiing expeditions, both downhill and cross-country, as well as time for snow-shoeing and that most Scandinavian of things – a sauna. From £653 per person, with B&B, two dinners and transport, but not flights.

Across the country, popular summer destinations such as Bergen, Stavanger, Trondheim and Oslo work just as well for winter city breaks. All have Christmas markets right through December, and all stand on the cusp of those stirring landscapes that set Norway apart from its far more vertically challenged neighbours. 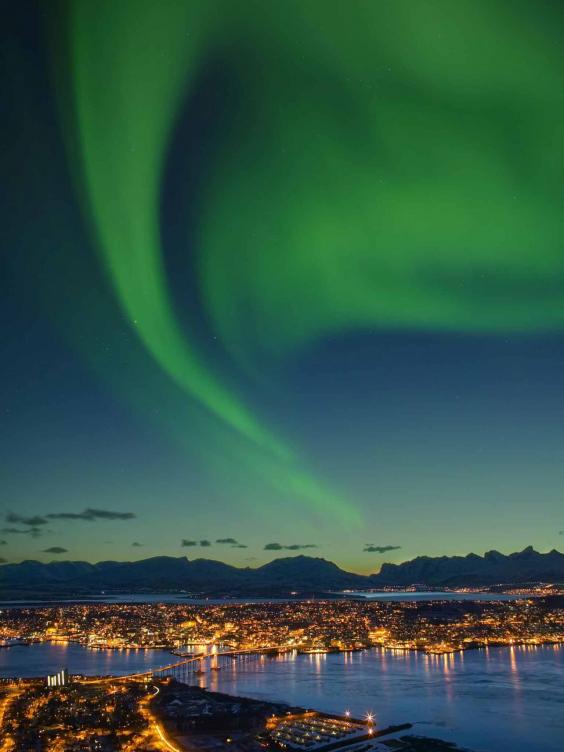 The natural world puts on few more spectacular shows than the Northern Lights, or aurora borealis. There is, of course, no guarantee that you’ll see them – cloud cover is always possible and some nights, for reasons unknown, they simply fail to show. But there’s nothing quite like it when they do.

There is a scientific explanation for the aurora, and yet, the experience of seeing curtains of green, yellow or crimson light dance across the sky is more about magic and wonder. The peak viewing season in Norway is October to March, and although they can be clearly visible in cities such as Tromso, they’re best viewed far from the lights of civilisation. There are plenty of professional tour operators to guide you – one of the best is Active Tromso (00 47 48 13 71 33; activetromso.no) which offers an evening excursion for 1,250 krone (£97). 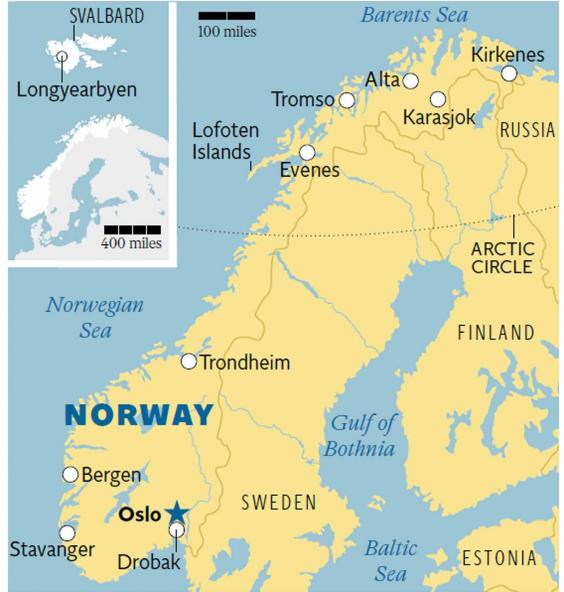 There are few places quite like Svalbard. It is closer to the North Pole than it is to Oslo and is the closest most mortals will ever come to the Polar North, that evocative place so rich in legends of hardship and great explorers.

The archipelago is ice-bound for most of the winter, but snowmobile and dog-sled expeditions will carry you out into Europe’s largest and most untrammelled winter wilderness, a place which remains home to more polar bears than people. Arctic foxes, Svalbard reindeer, and a powerful sense of isolation may well be your only companions.

Svalbard’s capital, Longyearbyen, is accessible by regular flights from Oslo and Tromso.

There’s nothing quite like sleeping in a room made of ice, and Norway has two such places, styled somewhere between the ice palaces of Disney folklore and simple igloos. The Sorrisniva Igloo Hotel (00 47 78 43 33 78; sorrisniva.no) sits beside the river in Alta and has elaborate carvings in the public areas, a honeymoon suite, and reindeer skins on the ice beds. Doubles cost from £340.

Kirkenes Snow Hotel is simpler in design but an equally unusual experience in Norway’s extreme northeast, close to the Russian border (00 47 78 97 05 40; kirkenes snowhotel.com). It charges from £200 per person, including a cosy campfire dinner.

Both places operate from the middle of December to early or mid-April and both offer winter activities including dog-sledging, snowmobiling and snow-shoeing. 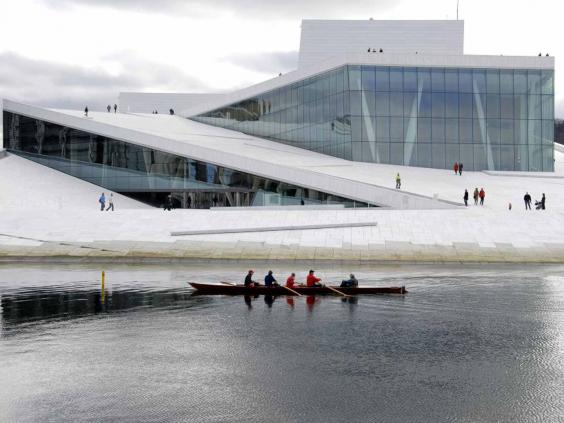 No matter what the temperature, life in Norway continues as normal, and that means Oslo’s most appealing attractions remain open year-round. For example, the showpiece Opera House (00 47 21 42 21 21; operaen.no), designed to resemble a floating glacier, is best seen in winter.

Just down the fjord from Oslo, the charming village of Drobak was for centuries Oslo’s winter harbour and is known as the capital’s “Christmas town”. The decorations here have to be seen to be believed, and there’s a fabulous Christmas shop called Tregaardens Julehus (julehus.no), plus the obligatory Santa Claus post box. 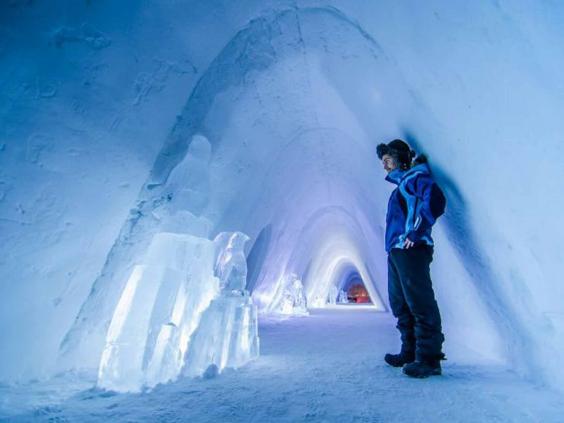 Hotels are expensive in Norway and the accommodation scene is dominated by chains. In northern Norway in particular, winter is considered the high season, with prices to match. On the plus side, most are supremely comfortable and have winter necessities such as underfloor heating.

In Tromso, the Scandic Ishavshotel (00 47 77 66 64 00; scandichotels.no) has a prime waterfront perch with views across the water to the Arctic Cathedral from around half of the rooms. Doubles with private bathrooms and a buffet breakfast start from £120.

In Karasjok, everything in the forest cabins at Engholm Husky Lodge (00 47 91 58 66 25; engholm.no) is handcrafted (including the reindeer-horn toilet brushes). It’s run by the famed dog musher Sven Engholm, who also offers dog-sledging expeditions. Double cabins cost from £182, full board.

At Longyearbyen in Svalbard, Basecamp Spitsbergen (00 47 79 02 46 00; basecampexplorer.com) is one of Norway’s more original hotels, built using recycled driftwood and lashings of design nous to recreate a trapper’s hut out on the ice; there’s an excellent bar and restaurant. Double rooms start from £125, B&B.

Norwegian (0330 828 0854; norwegian.com) flies from Gatwick to Tromso, Bergen, Oslo, Stavanger and Trondheim; and from Edinburgh and Manchester to Oslo. One-way fares in winter to most Norwegian cities start at £40, but Tromso’s popularity is reflected by higher fares – from £80 one way in December.

Norwegian and SAS have extensive domestic networks, while Wideroe (00 47 75 80 35 68; wideroe.no) flies between 43 Norwegian airports, including many small towns served by no other airline. The Hurtigruten Coastal Ferry runs from Bergen to Kirkenes every day of the year, stopping at 34 ports along the way.