Nico Rosberg has been crowned the Formula One world champion after surviving a grandstand finish at the Abu Dhabi Grand Prix.

Rosberg’s title rival Lewis Hamilton arrived for the season finale knowing that a victory alone would not be enough to stop his Mercedes team-mate from winning his first title, and so it proved.

Hamilton crossed the line ahead of Rosberg to claim his fourth consecutive victory.

But it is Rosberg, after a hairy exchange with Max Verstappen, a slow first pit stop, and Hamilton backing him into the clutches of the rest of the pack, who has emulated his father Keke – the 1982 title winner – to become the sport’s 33rd champion.

Hamilton needed Rosberg to finish outside of the top three to stand any chance of winning the title, and after both of the Mercedes cars made it through turn one without incident, Hamilton’s mind soon became occupied on finding a way for the chasing back to get past his rival.

Hamilton was told by his Mercedes team to go faster. On one occasion they asked why he was going so slowly. On another, he was ordered to pick up the pace. Paddy Lowe, Mercedes’ technical director, then came on at one point to issue a desperate plea for Hamilton to hurry up, but all of the orders were ignored.

Sebastian Vettel however, failed to find a way around Rosberg as they battled in the closing stages with Max Verstappen one spot further back.

The top four drivers were covered by just 1.6 seconds as they took the chequered flag.

Rosberg performed a series of doughnuts in celebration on the pit straight before leaping out of his Mercedes and kissing the nose of his car. He then picked up Bernie Ecclestone, the sport’s 86-year-old chief executive, as he waited in the green room ahead of the podium celebrations.

Speaking from the rostrum, Hamilton said: “I actually feel great. I want to say a big thank you to all of those who came out and supported me. A big congratulations to Nico. His first world championship. Well done, man.” 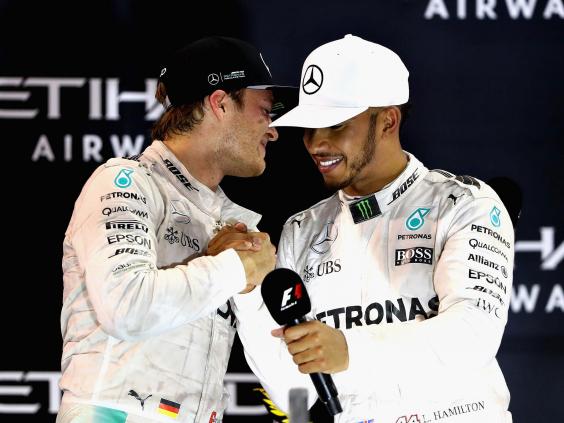 The title rivals then shared a handshake and an embrace before an emotional Rosberg struggled to hold back tears as he spoke.

“That was not the most enjoyable race I have ever had,” Rosberg, who revealed his parents would soon be joining him for the celebrations, said. “With those guys coming up at the end, it was not great those last laps.

“I also want to say congrats to Lewis. It is always tough to beat you.”

Hamilton, who started from pole, led Rosberg in the opening phase of the race, but the German soon found himself in third after he fell behind Verstappen at the opening round of pit stops. 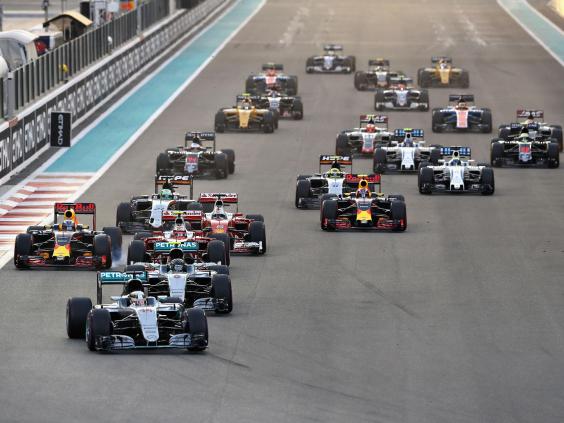 Hamilton led from the start ahead of Rosberg (Getty)

Verstappen, on a different strategy to his rivals after he spun at the opening turn, was holding Rosberg up. Rosberg was told by his Mercedes team he had to get past Verstappen, and the German did so, on the back straight, on lap 20. It was a perfectly executed move.

When Rosberg enjoyed a trouble-free second pit stop nine laps later, it appeared as though the championship battle was over. But when Hamilton began to slow down in the closing stages, Rosberg was caught initially by Verstappen, and then Vettel, who battled his way past the Red Bull driver, too.

But despite Rosberg and his team’s concerns however, he held off both Vettel and Verstappen to finish in second place to win the title.

Elsewhere, Jenson Button’s grand prix career ended in bitter disappointment after he was forced to retire.

Button, competing in what he described as “probably” his final race as he makes way for Stoffel Vandoorne at McLaren next season, lasted only 12 laps before he parked his car.

The 36-year-old Englishman ran heavily over a kerb at the Yas Marina Circuit which damaged his front suspension.