At least 34 bodies have been washed up on the Turkish coast in the latest tragedy to hit migrants and refugees trying to cross the sea to Greece.

Their boats are thought to have capsized while crossing to the island of Lesbos.

The bodies were found on beaches at Ayvalik and Dikili some 30 miles (50km) apart. Several were children.

More than one million migrants crossed the Mediterranean in 2015 and the vast majority went from Turkey to Greece.

According to the UN, 3,771 people were listed as dead or missing.

Conditions in the Aegean Sea in the early hours of Tuesday were described as rough and officials said the migrants who had tried to reach Lesbos were in rubber dinghies.

Coast guards at Ayvalik searched the area for survivors and rescued eight people who had climbed on to a breakwater, reported Dogan news agency. 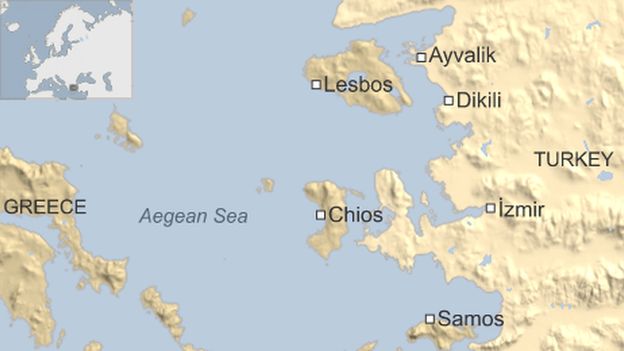 Residents said the boat that sank off Ayvalik appeared to have hit rocks. “I’m guessing these people died as they were trying to swim from the rocks,” one man said.

Security forces pulled some bodies from the water while others could be seen on the beach, all wearing life jackets. Some were clearly children.

Police told Turkish media that 24 bodies were found on the beach or in the sea off Ayvalik while 10 more were discovered near Dikili.

Although their nationalities were not confirmed, local governor Namik Kemal Nazli Hurriyet said they were Syrians, Iraqis and Algerians. 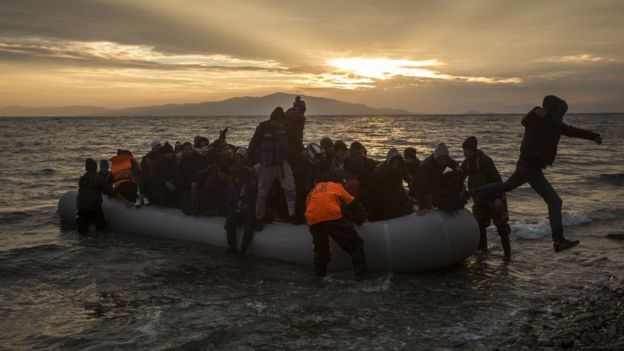 On Sunday, dozens of people were rescued from a small island off the town of Dikili as they tried to cross to Lesbos. Helicopters had to be called in because the island was too rocky for rescue boats to get to.

Boats are continuing to arrive on the Greek islands every day, despite the wintry weather. Lesbos is by far the most popular destination for migrants leaving Turkey. More than 500,000 reached the island in 2015.

Late last year, Turkey reached a deal with the European Union to tighten its borders and reduce the numbers crossing to Greece in return for €3bn (£2.1bn) and political concessions.

In this article:Greece, migrant crisis, Turkey