While fancy dress shops around Britain are flaunting their Day of the Dead costumes, and dramatic Day of the Dead parades march across cinema screens in the latest 007 instalment, Spectre, this annual Mexican tradition is essentially a very picturesque cult of the departed. Families gather at graves and churches to remember loved ones, a ritual animated by colourful folk-art skeleton figures, sugar skulls, and offerings of marigold garlands, candles, toys for deceased children and shots of alcohol for adults.

In both cemetery and cocktail bar, mezcal is fast overtaking tequila as the smart spirit of Mexico for the dead and the living. Both drinks are distilled from the agave cactus, popularly known as the maguey, but while tequila is made from one species only, all 15 varieties are used for the older, indigenous mezcal, allowing for a much greater variation of tastes, like single malt whiskies.

Once dismissed as cheap country hooch, mezcal in exquisite bottles now graces new-wave restaurants and specialist mezcaleria bars, and aficionados scrutinise the backroads of the chief mezcal regions in the north and centre of the country for the palenques – little artisan distilleries – of the best master mezcaleros.

It was with such a pilgrimage in mind that I travelled to Mexico. Checking out a cross-section of the mezcalerias of the capital seemed a good start, and an excellent theme for a rapid Mexico City tour. I’d been directed to Mezcales de Leyenda, 20 years ago one of the pioneers of the mezcal boom. Its original bar, La Botica de Condesa, in the bohemian district of Condesa, prime mezcal hipster territory, sets the tone: a simple interior dominated by wood, paintings of magueys, backlit shelves of bottles, a discreet rock soundtrack, minimal snacks. The two latest Boticas, both in historic buildings in the area around the cathedral, are similar. All offer around 50 mezcals, including four of the company’s own – three regional varieties plus the flagship bottle, Peloton de la Muerte (Death Squad), made in Oaxaca.

The Leyenda group has plenty of competition. In smart Polanco, Los Amantes offers an interior aglow with vibrant colours, neon and fairylights, exotic statuary and sepia photos. Downmarket and downtown, there’s the equally colourful poster-draped Tenamba in the Plaza Garibaldi, notable for its mariachi-infested kitsch. Next door, in the new Mezcal and Tequila Museum, you can study agave botany, inspect a model palenque and a period bar, see displays of the beautiful labels and buy bottles, paraphernalia and novelties.

But Mexico City is a consumer of the spirit, not a producer. There are numerous sources, prominent among them northern Durango and the state of Guerrero on the Pacific, but Mexico’s undisputed mezcal heartland is Oaxaca, home to the largest variety of native agave, and origin of 80 per cent of the nation’s production. The state designates its highway 91 a Camino del Mezcal.

Oaxaca city, the capital, is a 40-minute flight south of Mexico City, its elegant colonial centre occupying a wide valley bordered by rugged hills. On a Friday evening, the centre was buzzing with families milling around buying balloons and hot dogs, drinking beer and lemon on the café terraces, listening to ranchera groups and appraising the trinkets hawked by young girls. In front of the 17th-century church of Santo Domingo, the wide concourse was planted with spiky magueys.

I began my bar crawl in the Zandunga mezcaleria (around the corner from the Oaxaca branch of Los Amantes) – tiny, jewel-like and enticing but full. I started with a Mexicanised Cuban mojito – pleasant, though the undertones of smoke and earthiness from the mezcal, infused in the roasting pits of the palenques, along with ubiquitous coriander garnish, took some getting used to. 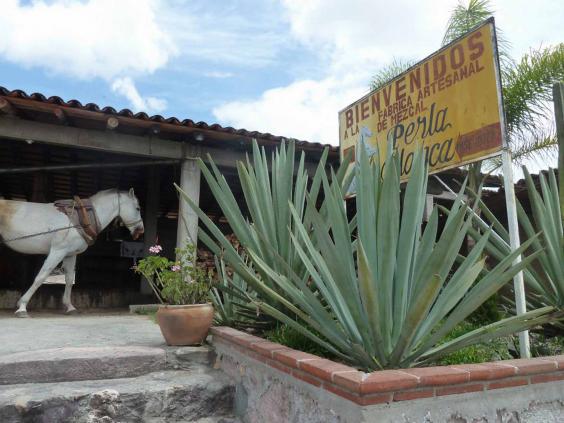 Next, a tasting: a pinch of worm salt on the tongue, a suck of orange, a slug of spirit. The finely ground worm, a greyish shading, added a certain savouriness to the salt. The three I tried were distinctly different, but a herculean feat of drinking would be required to acquire a lasting comprehension of the varying degrees of smokiness, the spectrum of sharp to mellow, the flavour of the variety of agave: tobala, espadin, jabali …. Oaxaca has a couple of dozen more mezcal bars to assist, from popular favourites such as Zandunga and the Mezcaloteca to Piedra y Lumbre, the serious connoisseurs’ hang-out, and a genuine speakeasy, the semi-clandestine El Destilado. The most colourful venues are rows of stands in the series of covered markets south of the centre, all sporting crammed shelves of bottles.

Hotspot as it is, Oaxaca City is still not the source, nor even the Mezcal Capital. That title is claimed by Santiago Matatlán, 50 kilometres east. Between the two towns, the Camino del Mezcal is lined with small producers, all ready to show off their stills and their little bar-shops.

The road rolls through a generous landscape, cattle prairies interspersed with plantations of magueys. Arriving at Matatlán, I passed under the ornamental civic arch proudly surmounted by a model copper mezcal still, while a wedding party with brass band marched up the fast lane. The main street contains a dozen palenques, but I was heading for La Perla Blanca, a local producer which supplies Mezcales de Leyenda.

Up a flight of maguey-adorned steps, owner Cudiberto Sernas was on hand, ready to walk visitors through the piles of maguey kernels to the big wood-fired roasting pit, the massive stone crushing wheel and Aldo, the horse that drives its circular motion. The fermenting barrels, the coils of copper distilling pipes in their tanks of muddy water were also visible. As with thousands of his countrymen, Cudiberto owes the current success of his family business to the great mezcal renaissance.

“So this is due to sales of Peloton de la Muerte in the smart new mezcalerias of Mexico City?” I asked. “Yes, but we call it Perla Blanca here,” he replied, showing me a bottle of his own brand. I must say I approved. The Mexican obsession with mortality is all very picturesque, but give me White Pearl over Death Squad for an aperitif any day.

In this article:mexico, mezcal country