Our local playing fields have come to life again. After weeks and weeks of mechanically circuiting this patch of green as part of our government-approved daily exercise, I was struck by a feeling of intense gratitude at simply being able to sit down on a blanket with a tinny, and it was clear others agreed. Families armed with picnic chairs and packed-up food set up camp as children circled the sausage rolls like sharks; a man jokingly offered his friend a crisp from his Pringles packet from two metres away, and was declined. Football was played, tunes were blasted and prosecco was guzzled. At least until everyone needed the loo and had to go home.

Under lockdown much of life has, ironically, moved outside. Even at its most severe, lockdown transformed my London neighbourhood, where £2m terraced houses are a stone’s throw from some of the most deprived estates in the country and outdoor space is at a premium. I know these streets by heart, but for the first time I passed by people sitting out on their steps, or maybe better to call them “stoops”, as the scene had something of a New York feel to it. There were others hanging out of windows, draping themselves over tiny patches of roof and sitting on the tops of porches. Kids played out in the street as though it were the 90s, a family had a barbecue in a parking space. Our next-door neighbours, who have a young child and a very small patch of concrete to call their garden, have been cooking and eating outside every day

The glorious weather has played a part, of course. When I was younger, I was always bemused by the tendency of my parents’ generation to reminisce about the summer of 1976. Was our weather really so crap that one long, hot summer became imbued with such significance? When interviewing members of the hippie movement as research for my novel, which is set over a long, hot summer, one person said that 1976 was partly memorable because so many people began to shift their indoor lives outdoors. Of course, cities always come alive during the summer, but this is different. Everywhere, life is spilling over like warm takeaway beer from your local pub as you zigzag back to the park.

This gives me hope, at a time I’ve been scanning the horizon for glimmers. If bars and restaurants are to survive this summer, they will have to continue to maintain social distancing, and what better way than to let them, too, spill out? Paris is setting a precedent. The city’s mayor, Anne Hidalgo, said cafes, bars and restaurants would temporarily be allowed to set up tables on pavements and in parking spaces when they open this week, and some roads may even be closed for weekends to allow more space for alfresco eating and drinking.

The UK should follow Paris’s example. Now is not the time for bylaws and licensing restrictions. There is an opportunity to help our languishing hospitality industry and to give people some pleasure and enjoyment while allowing them to stay safe. Britons are not, by instinct, a terrace-dwelling nation. We specialise in warm, cosy pubs whose existence partly stems from our industrial heritage – workers clocked off, then clocked in at their local, and that was, until Covid-19, how we did things. The pace in continental Europe is more languid: a long lunch eaten in a square even on a weekday, an early morning coffee as the streets come to life, an aperitif with a colleague. Certainly, we do a nice line in beer gardens, and I love that woozy all-day-rosé feeling, but the potential is there for better use of outdoor space.

You can say it’s the weather. The Greeks let their children play out until late into the evening, as the adults sit with chatting their friends, because it’s too hot for them to run about in the daytime. Long, baking Italian summers lend themselves well to their culture of jubilant square-drinking. But when I lived there, people still sat outside (and ate gelato) in icy winters in the shadows of the Alps. They were provided with blankets, awnings, heaters (an environmental issue, true, but there must be innovative solutions). Scandinavia is similar. A spot of bad weather can’t be the only things stopping us. 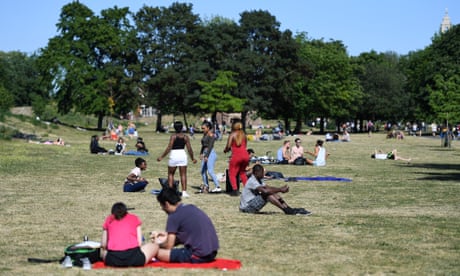 UK lockdown rules: what you are allowed to do from Monday

The barrier must be somewhat psychological too. Lockdown has helped to shift this, and I wonder if that will be one of its legacies. Just as we noted our grandparents’ tendency to keep food way past its sell-by date, the waste not, want not mentality of the second world war, I wonder if our grandchildren will find our dogged devotion to being outside slightly flabbergasting; “Grandma’s making us eat outside in February again.” The climate is only getting warmer, as well.

Of course, there will be need to be changes to infrastructure. Closed public toilets are a factor (more than one friend has joked about adult nappies being the next boom industry), and they were hardly common before the coronavirus crisis. Parks that have a festival atmosphere on the weekends need the resources to clean up properly, and noise and antisocial behaviour must be considered. Nevertheless, we have been too conservative about these in the past, and that a little loosening up will gradually shift the culture so that we don’t behave as though we’ve just served a spell in a teetotal prison facility in the Arctic every time the sun comes out.

Covid-19 has highlighted the social divide when it comes to outdoor space, but we’re not the only country where gardens are a luxury. Cafe culture acts a sort of compensation. For many people in Britain, our homes are our castles, but it doesn’t have to be that way. Lockdown has taught us that there’s joy to be had in spilling out.

• Rhiannon Lucy Cosslett is a Guardian columnist and author