Police investigating a “terrorist incident” at an east London Tube station have urged witnesses who filmed the stabbing to share their footage with detectives.

A 56-year-old man was seriously wounded at Leytonstone in east London at 19:06 GMT on Saturday.

The knifeman reportedly shouted “this is for Syria”.

A man, 29, was arrested on suspicion of attempted murder and a residential address in London is being searched.

The 56-year-old is believed to be in a stable condition in hospital. A second man received minor injuries in the attack and a woman was threatened but unhurt.

Police Tasered the suspect, who remains in police custody. The stabbing is being investigated by the Metropolitan Police Service’s counter terrorism officers.

Downing Street said it was monitoring the situation closely.

Fellow passengers reportedly shouted at the man to drop his weapon and one person shouted “You ain’t no Muslim bruv,” a sentiment that has been picked up on social media by people trying to disown and sideline the attacker.

Commander Richard Walton, of the counter terrorism unit said: “I am aware that there were a number of members of the public in the underground station who filmed the suspect on their mobile phones during and after the attack and I would urge them to come forward and speak to us and share with us the filming that they carried out.

“I would continue to urge the public to remain calm, but alert and vigilant. The threat from terrorism remains at severe, which means that a terrorist attack is highly likely.” 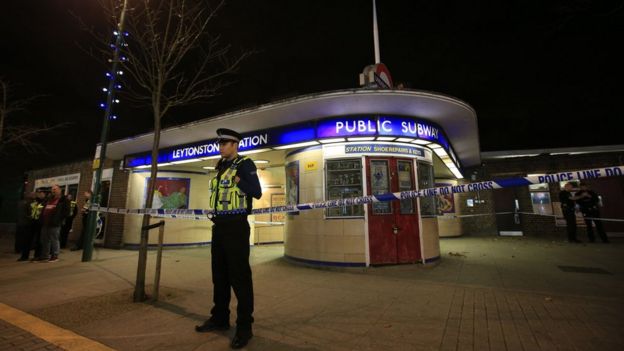 A witness told the BBC he saw a man holding a knife, about 3in (7.5cm) long, standing over another man who was lying on the ground, and people running out of the Central Line station.

Michael Garcia, 24, a financial analyst from Leytonstone, said he was walking along an underground passage that runs through the station when he saw people running outside.

“I realised it wasn’t a fight but something more sinister,” he said.

He said he saw “a guy, an adult, lying on the floor with a guy standing next to him brandishing a knife of about three inches… maybe a hobby knife”.

“It had a thin blade, but looked fairly long,” Mr Garcia said.

Roy Ramm, a former Met Police commander, said the attack appeared to be “random” and was “not like the Lee Rigby attack on a soldier.”

He said the knifeman did not appear to have an exit strategy.

Leytonstone Islamic Association released a statement in which it strongly condemned any sort of violence.