Seven employees of a popular privately-run Afghan TV channel were killed after their minibus was targeted by a suicide car bomber in the capital Kabul.

At least 20 others – including passers-by – were wounded.

The Taliban said it carried out the attack. It had threatened to target Tolo over its news coverage ofthe fighting in Kunduz city in September.

The minibus was reportedly taking staff from Tolo and its parent media organisation home for the day when it was rammed by the suicide bomber in central Kabul.

The explosion sent black smoke billowing into the sky, with emergency services rushing to the scene.

A Tolo TV reporter told the BBC’s Kawoon Khamoosh he was fortunate to be alive after nearly burning to death.

Announcing what had happened in a live broadcast, Tolo news presenter Fawad Aman said: “The enemy of humanity, peace and Islam martyred our colleagues because they were exposing their crimes

“They martyred you to silence us, but they will never achieve this evil goal.” 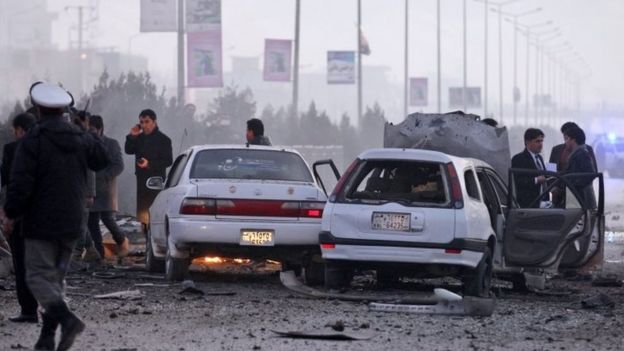 Numerous cars were damaged in the blast 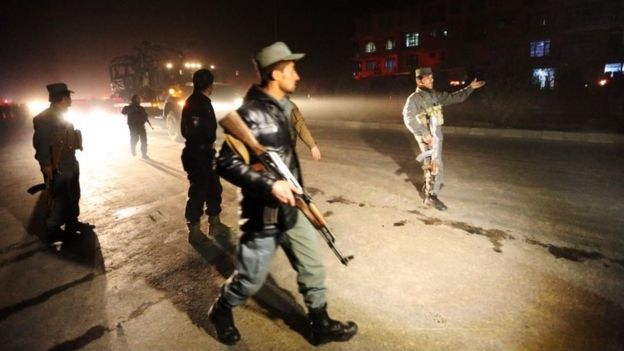 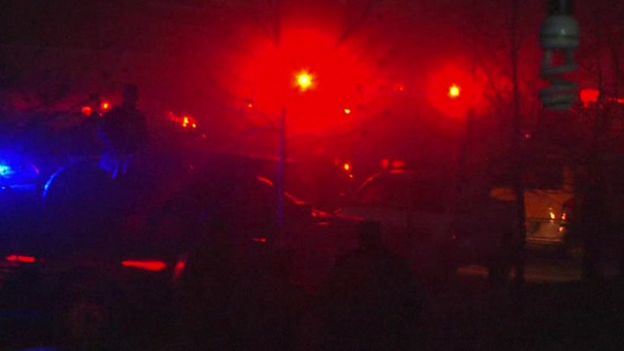 Emergency services were also at the scene of Wednesday’s bombing

Tolo TV runs Afghanistan’s first 24-hour news channel and, along with its website, is one of the country’s most well-known news sources.

Tolo had implemented tighter security measures in recent months after the Taliban threatened it and another privately-run news channel, 1TV, over their coverage of the fight for Kunduz, calling them “satanic networks”.

Early reports of Wednesday’s blast suggested the Russian embassy was struck, but the Russian foreign ministry said damage to the building was minimal.

The Taliban have launched numerous previous attacks on Kabul.

Since the beginning of 2016, the city has been hit by at least six bomb attacks – in the most recent, on Sunday, a rocket landed near the Italian embassy, wounding two security guards. The Indian and Pakistani missions have also recently been targeted in other parts of the country.

Last week at least seven Afghan security personnel were killed in a gun battle near the Pakistani consulate in Jalalabad.

Observers have speculated that the attacks near foreign missions could also be aimed at destabilising attempts to revive peace talks with the Taliban.

In this article:Afghanistan, Kabul blast