An island walk, but as we set off it feels as though we’re on the deck of a ship cresting a wave. The path sweeps up the monumental humpback of Tennyson Down on the Isle of Wight, broad green slopes falling away to the sea to port and starboard. Up ahead, teetering on the bow is the Tennyson Monument, pushing out into thin air like a masthead rig. Ravens lurch upwards, sideways in kite-like manoeuvres. Kestrels hover over the sheer cliffs. What, I wonder, are they hunting? Do voles abseil?

We pause to look around at the wonderfully wonky, uneven landscape. Chalk cliffs, dead ringers for the White Cliffs of Dover, arc away to the south-east, where like the meeting of two ill-matched curtains, they turn golden, the colour of sandstone and mud. Waves muscle into Freshwater Bay. The river Yar slices through from the Solent to the north, almost reaches the bay and appears on the cusp of turning the western part of Wight into another island.

It’s scintillating. Sir John Betjeman described the scene perfectly when he said “one feels that Western Wight is an earthquake poised in mid explosion”. This is also a landscape detached from the traditional bucket and spade perspective of the island. “That image can be good, it can be misleading,” says my companion, David Howarth, vice-chairman of the Isle of Wight Ramblers. “I come up on to the Downs sometimes just to sit for 10 minutes to listen to the birds. It’s so therapeutic.”

We crane our necks up at the Tennyson Monument, both a beacon for sailors and a tribute to the poet who made his home nearby for the best part of 40 years. Haunting lines from his elegiac poem, “Crossing The Bar” are etched on the plinth: “Sunset and evening star, And one clear call for me! And may there be no moaning of the bar, When I put out to sea.” I suspect his ghost still paces the cliffs, wrapped in his signature cape and sporting a broad-brimmed hat. 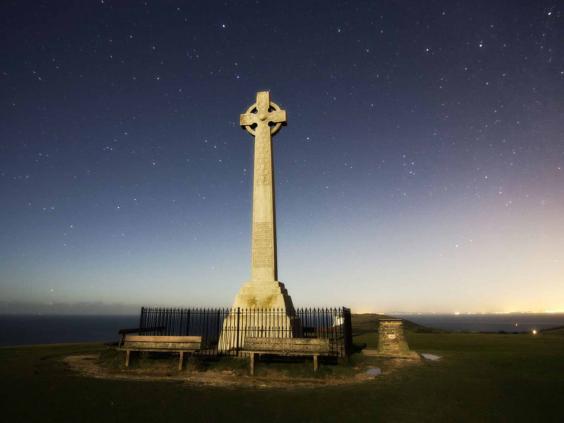 Sheen reveals he is HIV positive, and this is why that is important Most Popular A French flag on your Facebook profile doesn’t make you a hero Spain ‘issues arrest warrant’ for Israel’s Benjamin Netanyahu Anonymous begins publishing details of suspected extremists Syrian passport found on one of Paris bombers is almost certainly fake Almost 280 bodies discovered under Manchester tram line Apple Falls Into Bear Market Territory For The First Time In Years Investment Week The Most Exciting MMORPG You’ve Ever Played! Don’t Miss This!Stormfall – Online Game Austria: ‘Xenophobia Must Be Met Head On’Financial Times Jump in Fed interest rate expectation the trigger for higher FX volatilityinvestix.com That’s How You Find Awesome Hotel Deals!Save70 by Taboola Sponsored Links Video BBC reporter breaks down during live broadcast in Paris CCTV shows man find car blocking his drive – then set it on fire Finnish weatherman gives his forecast a Game of Thrones makeover Sponsored Features Settin’ off from the dock of the Bay: Kayaking in Georgian Bay Feeling at home in Venice Dubai: sun, skyscrapers and scope to grow Ghent travel tips: Where to go and what to see in 48 hours Students: don’t suffer financial worries in si
Tennyson Memorial

We gallop on to reach the Needles and the headland. Standing above these delicate chalk churches and molars is a genuine “wow” moment. The chalk here may be hard but the chalky waters lapping their base are a reminder of their impermanence.

Even with a light breeze, the swells pounding the needles are substantial. “The waves and the wind have had nothing to hit for 3,000 miles,” says David. This is, unexpectedly one of the windiest spots in the UK, with regular recordings of 100mph gales. Across the water we can pick out the white cliffs of Studland Bay and get an inkling of England tilting away over the curvature of the earth.

We return along a lower route, in the lee of the Atlantic. David explains to me how the Ramblers have been involved in a “donate a gate” scheme, fundraising for accessible stiles and creating wheelchair-accessible paths. We gaze at Alum Bay and its exquisite rock colours; up to 21 shades of grain have been identified here and a souvenir vial layered with the coloured sands is a popular souvenir.

We return to Freshwater Bay and Dimbola Lodge, a quirkily ramshackle building that seems entirely in tune with the outlook of its former owner, Julia Margaret Cameron. One of the most celebrated women in the history of photography, Cameron presented photography as an art form, not merely a neutral recorder of facts or “reality”.

Cameron first visited the Isle of Wight as a guest of Tennyson before buying two adjacent cottages, later linking them with a gothic tower to create Dimbola Lodge. She was one of a gaggle of Victorian A-listers who made the island their home, or where they took the creative air, including Lewis Carroll, Charles Dickens, Edward Lear, and Virginia Woolf, who was Cameron’s great-niece.

Dimbola Lodge became something of a creative hub. Cameron was a pioneering portrait photographer and her unconventional techniques included images that were intentionally out-of-focus or with deliberate scratches and smudges.

Her pictures are portraits, all taken indoors, and I peer into her bedroom, where, from the bay window, she would lean out and beckon random passers by to have their photographs taken. Cameron was a socialite rather than a walker, but photography was also in its infancy and I’m left wondering what she would have done with the landscape beyond her window had she had the technology. Lugging an oversized camera on stilts was impractical, as was the prevailing “wet plate” process of the day, which required the proximity of a dark room.

This year is the bicentenary of her birth and to mark the occasion, the V&A in London will be displaying more than 100 of her photographs from its collection along, with a retrospective of her work, from later this month. The socialite – and her work – retained her London links but you sense her heart was always on the island.

Directions: Go through the gate immediately to the east of Dimbola Lodge and follow the grassy track up to Tennyson Down, past the monument, and make for the coastguard cottages. Just in front of the cottages bear right to reach the Needles New Battery, with views of the Needles. Return along the lower path above Alum Bay, taking footpath T25 and then footpath T24 signposted for Freshwater, passing through the quarry car park.

Getting there and around