Sunrisers Hyderabad’s dismal run in this season’s Indian Premier League continued as they lost to Delhi Capitals by eight wickets in Dubai.

Shreyas Iyer hit 47 as Delhi reached the target with 13 balls to spare.

The win takes Delhi to the top of the table, overtaking Chennai Super Kings but having played a game more, while Sunrisers remain bottom.

The match went ahead despite Sunrisers’ T Natarajan testing positive for Covid-19 on Tuesday.

The IPL resumed in the United Arab Emirates on Sunday after the competition was postponed in May amid a surge in coronavirus cases in India.

Warner’s woes continue as Roy waits in the wings

David Warner’s return to the Sunrisers’ starting XI did not go as planned, the Australian dismissed for a three-ball duck by Nortje.

Warner was replaced as Sunrisers’ captain by Kane Williamson after the first six matches of the competition, and then dropped for the seventh game, before the tournament was postponed

After Jonny Bairstow opted not to return to the franchise for the second instalment of the IPL, the stage was set for Warner to rediscover the form which has seen him amass 3,887 runs in 149 IPL career innings.

But his tame dismissal – a leading edge chipped to point – could now mean an opportunity for England opener Jason Roy in Sunrisers’ next fixture against Punjab Kings on Saturday.

Some Sunrisers fans feel Warner, who has scored four centuries and 50 half-centuries since making his IPL debut in 2009, will come good, while others are ready for the change… 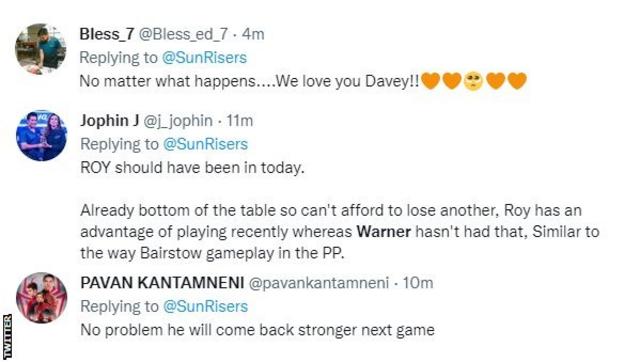 The pace of Nortje was at times unplayable for Sunrisers’ batters, with the South Africa seamer consistently reaching speeds of over 90 miles an hour.

Bowling into the pitch, Nortje was disciplined with line and length throughout his four overs and was rewarded with a second wicket when he dismissed Kedar Jadhav.

While Rabada was more expensive and less accurate than Nortje, his dismissals of dangerous duo Wriddhiman Saha (18) and Manish Pandey (17), and the wicket of Abdul Samad who top-scored with 28, were significant in limiting Sunrisers.

In reply, Delhi got off to a watchful start to reach 29-1 after five overs.

Opener Shikhar Dhawan – the IPL’s top-scorer this season with 413 runs – shared a 52-run partnership with Iyer before he was caught in the deep off the bowling of Rashid Khan.

Former captain Iyer – who missed the first match off the tournament because of a shoulder injury – played a patient 41-ball unbeaten knock, while current skipper Rishabh Pant hit a quickfire 35 off 21 balls.

Iyer pulled seamer Jason Holder over long-on for six to see Delhi over the line in style.