One inky night, as we munched chocolate on the river’s silvery sandbank, Saeeb Khan, my guide, pierced some small dark beans and fixed them to a stick. As he ignited it, the beans burst into flames and flickered gently, casting a homely glow on to our little knot of camping chairs and tents. “Jatropha seeds,” he beamed, “tribal people used these like a natural torch, a kind of bio-diesel.”

We were in the centre of Madhya Pradesh, India’s heartland state. This is Jungle Book territory, the region where Rudyard Kipling, born 150 years ago this December, set his celebrated collection of stories. Around us loomed the dense forest and precipitous sandstone crags emblematic of those tales. Apart from the gurgling Denwa River and flame-crazed moths, all was still, quiet and utterly magical. I was here not so much for the tiger reserves that justifiably draw the majority of this state’s visitors, but to experience a new walking holiday. Organised by Village Ways, whose model of low-impact and sustainable rural tourism already takes visitors into lesser-known corners of Rajasthan, Karnataka, Kerala, Nepal and Ethiopia, this new Madhya Pradesh programme has been developed in conjunction with the state’s forest department to offer an immersive experience of an overlooked part of India.

I’d begun with a cup of steaming chai at the roadside hamlet of Sita Dongri, a profoundly rural slice of nowhere in the Satpura Hills. As Saeeb and I headed down a dusty track, lilting music wafted from a mud-walled house with low-slung eaves and smooth baked-earth yards. A patchwork of fields was dotted with groves of trees and farmers’ raised lookouts, or machaans. 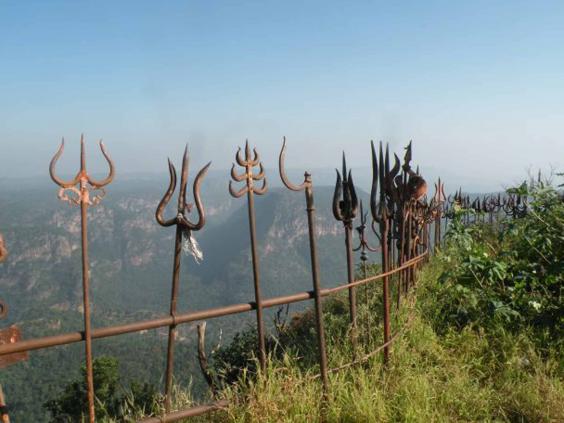 Within an hour we reached Chopna. This nondescript hamlet is home to around 10 families from the Yadav community, a populous caste of pastoralists who mainly tend cattle for milk while harvesting tendu leaves for beedi cigarettes and amla, or Indian gooseberry. I lodged in a spacious walk-in tent alongside one of the houses and, as far as the wide-eyed children were concerned during my “walkabout”, may as well have beamed down from space.

We took meals – wholesome and purely vegetarian – in the spacious porch of Khushilal Yadav’s house. One of eight brothers, Khushilal heads the village council and so was deemed the natural host. Chopna’s men were lean and courteous, the women shy and dutiful, and it seemed the novelty of my stay would be slow to fade. Over a delicious breakfast of potato parathas, I watched women and girls make for several deep wells with silver pitchers balanced on their heads.

Heading off through another tract of forest, the lowing of Chopna’s cattle faded away. Eagle-eyed Saeeb spotted a moulted snakeskin. “Probably cobra,” he announced brightly as we strolled on towards Bhandhan, a hamlet of just one large, extended family.

The western edge of its modest fields gave way to the shoaling banks of the Denwa River. Young men bathed in its shallow braids, their lungis and vests laid out to dry on smooth rocks. In the distance, thickly forested hills with bare russet scarps reared up from the landscape. And up there, pointed Saeeb, was our destination – Pachmarhi, his hometown – a hill station of Raj-era bungalows and an Anglican church. 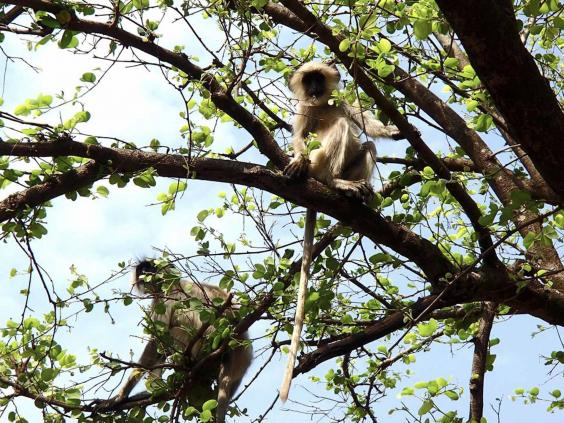 We followed the Denwa downstream, past beach-like shallows and rock pools, through glades and over grassy mounds. By 10am, it was already hot and the gently flowing river sparkled alluringly. Minutes later, I was in, splashing about like Mowgli, as Saeeb remarked, clearly amused.

Refreshed, we waded across to the opposite bank to pass a rugged section of bushes and boulders. Disturbed by our approach, a troop of langur monkeys cavorted through the water and bounded off into the forest. Cutting across a great looping meander, Saeeb led me back to the Denwa at Dahlia, a rudimentary forest checkpost. The valley was now deeper and more muscular. Pachmarhi stands atop a navel-like plateau – the Satpura’s highest section – whose perimeter is gouged by steep ravines. Our route crossed part of the core zone of Satpura National Park, among the largest of India’s tiger reserves. Today, it’s known as the Forsyth Trail after Captain James Forsyth, an Indian Army officer who explored the region in the 1860s. Forsyth helped establish forest department control over the teak and sal-rich forests and unwittingly launched Pachmarhi’s transformation from remote tribal hamlet into a Raj-era hill station and summer retreat. Today, barely 50 visitors a year venture through these hidden valleys and on to the trail up to Pachmarhi.

I spent much of the afternoon enraptured by yet more Mowgli moments. As I gazed at the forest-cloaked hillside, there was the added frisson that perhaps a tiger might be lounging nearby atop a rocky ledge. Forsyth, a veteran huntsman, roamed this very valley and often saw tigers’ scat and prints while admiring their elusiveness. Today, it’s estimated around 70 live in Satpura and, uniquely, the reserve permits guided walks.

Later that evening, as the “bio-diesel” seeds flickered with surprising intensity, Saeeb – who knows these hills better than most – admitted he’d never seen a tiger while on foot and rarely encountered leopards. “In fact, the sloth bear is most dangerous – very unpredictable, fast and strong,” he added frowning, “especially a female with cubs.”

In the morning, heavy dew glazed our tents. Two forest guards – young village lads tasked with patrolling and reporting any unusual activity – were accompanying us all the way up to Pachmarhi. Crossing the river into Satpura’s core zone, we began climbing a gentle, part-cobbled track to the navel of India and soon reached the pretty Wainganga River. I happily lingered beside the rapids, eddying pools and a small beach, which until very recently the nearby hamlet of Kanjighat had enjoyed in pristine isolation.

Barring a solitary shack, its villagers have been relocated as part of government efforts to de-populate the core zones of the nation’s tiger reserves. In the shadow of impenetrable-looking cliffs, thick grassland now covers former fields as nature slowly, surely reclaims the earth. An elderly couple appeared and regarded us with curiosity. Diwali was just days away and they’d come for the day to distil mahua, a popular local spirit derived from the flowers of the mahua tree. 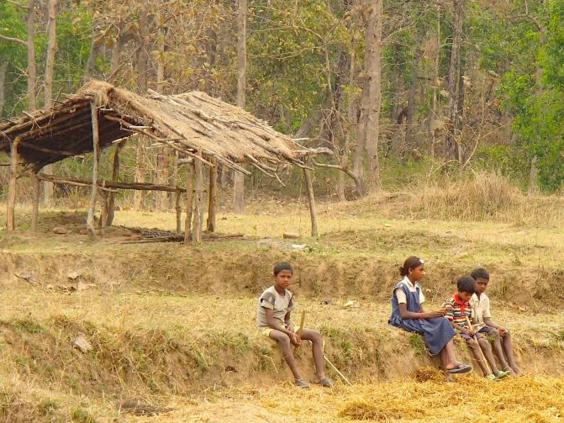 The trail wound more steeply through thicker forest. By mid-afternoon occasional openings allowed lofty views across a dense sea of green, puckered with flat-topped hills. As we finally crested the plateau, Pachmarhi’s scruffy bazaar came into view and, beyond it, numerous fin de siècle bungalows – some of which are now hotels or homestays with evocative Anglophile names such as Glen View and Rock End Manor – along with the gothic Christ Church and an old-fashioned gentlemen’s club.

Forsyth noted that although these mysterious hills were regarded by outsiders with awe and fear, pilgrims braved the wilderness to reach a series of esteemed Shiva shrines. Many still visit, drawn in particular to a pair of eerie cave-temples at Jata Shankar and the exhilarating hike up to Chauragarh, the Satpura’s second-highest peak.

But first, Saeeb suggested we visit the Bada Mahadev temple at its foot. A steady trickle of barefoot devotees entered the womb-like cave which, 50 feet in, narrowed to a humid, dripping alcove. An incense-shrouded priest tended to devout Hindus bowing before a lingam, a representation of Shiva. Just by its entrance, Saeeb indicated the remains of a metal trident, the ubiquitous symbol of Shiva, thought to date to the seventh century. 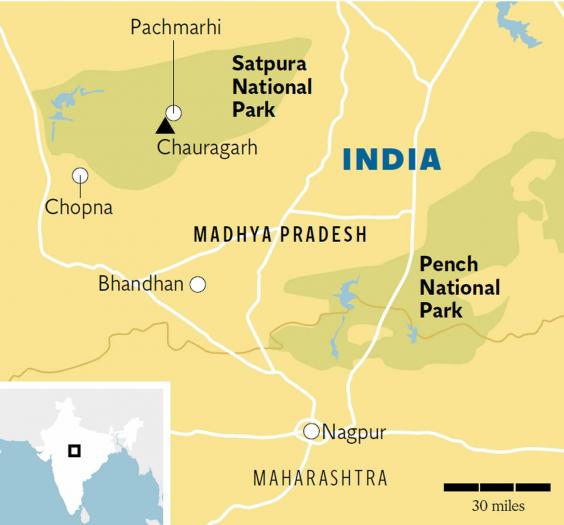 The hike started easily enough – slightly downhill – before we reached a crude archway and the first of many ascending steps. During certain festivals thousands come this way, but now all was quiet. Climbing steadily on both stairs and path, we soon gained tremendous vistas of the plateau’s southern flanks, ravines and distant plains. The trail eventually narrowed to an implausibly steep and vertiginous staircase clinging to a spine of rock; we approached the summit temple through a colonnade of six foot-tall tridents. Views aside, Chauragarh’s fame rests with an extraordinary thicket of iron tridents stacked in the temple courtyard. Embellished with colourful images of Shiva and hooded cobras, and hauled up here by the strongest pilgrims, many are of human height and weight. Some are considerably more – the heaviest, claimed Saeeb, weigh around 250kg. Although I failed to even budge several hefty specimens, just reaching the summit meant our karma was good. We headed down with a spring in our step.

In this article:India, Kipling country