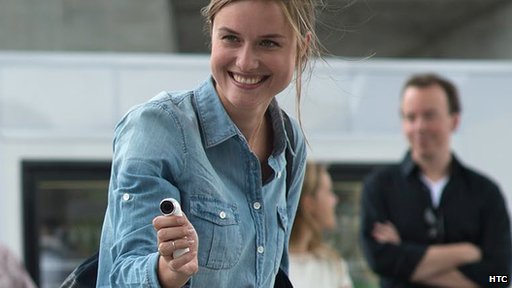 HTC has announced a waterproof, wide-angled digital camera, the RE, capable of taking still photographs and videos.

The RE’s cylindrical design includes a sensor that automatically turns the device on when it is picked up and only two button controls.

An app lets wirelessly connected smartphones and tablets stream the footage live and play it back later.

Experts said the device would compete with GoPro’s products, but that it compared unfavourably to them.

However, HTC suggested its gadget had the potential to “change the face of mobile photography”.

“We are taking you out from behind the viewfinder and putting you back where you belong, at the heart of the action.”

The company also unveiled an Android smartphone with 13 megapixel (MP) front and rear cameras at a New York launch event.

HTC recently reported net income of $640m New Taiwan Dollars ($21m; £13m) for its last quarter, reversing a loss from the previous year. However, its sales were lower. 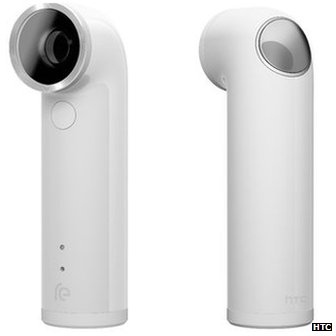 The RE features a 16MP camera and is capable of shooting in 1080p “full high-definition” video at normal speed, and 720p in slow motion.

A tap of its shutter button, at its base, takes a photo, while a longer press starts a video recording. A switch on its side allows users to change the video mode between real speed, slow motion and time lapse.

It does not feature a screen of its own, but can record to a SD memory card, stream material to a live YouTube channel and send footage to an associated Android or iOS app.

The suggestion is that owners use it in situations that they do not need to monitor framing – freeing them up to watch events directly as well as record them – thanks to the inclusion of a lens that captures a 146 degree field-of-view. 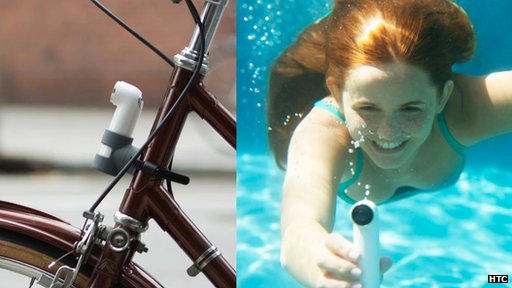 The RE can be clipped onto other equipment and used underwater

The machine has an IPX7 waterproof rating, meaning it can be submerged in water to a depth of 1m (3.3ft) for up to half an hour.

An add-on case can protect it to depths of 3m for two hours, and HTC is also releasing clip-on and suction mounts to allow the RE to be attached to bicycles, cars and other kit.

“My big question is the form factor,” commented Francisco Jeronimo, from the tech research firm IDC.

“This is a very niche product and it’s going to be very difficult for HTC to compete against GoPro.

“GoPro is a very established brand in this segment and has recently announced a cheaper product that will likely cost less than what HTC will decide to charge for the RE.”

He added that HTC had told him it planned to pitch the RE to a wider audience than that of GoPro, and would play up its ability to rapidly go from dormant to active states.

But he added that in his opinion, a smartphone would suit most people’s needs.

oPro recently announced new models, including the top-end Hero4 Black, which can capture video in 4K – four times the resolution of the RE – and is waterproof to 40m, has a 12MP sensor and comes with a remote control. It costs £370.

Roberta Cozza, from the Gartner tech consultancy, was also nonplussed by HTC’s attempt to enter the market.

“The digital camera sector is crowded and very tough to get into,” she said.

“While GoPro targets a very specific segment of the market, HTC has said it expects the RE to be more mainstream, used for things like capturing the first steps of your child.

“But I fail to grasp the convenience of it, and I think HTC could have done a better job with the design.”

The analysts were, however, more positive about the company’s new handset, the HTC Desire Eye.

The smartphone’s 13 megapixel front camera is the highest resolution on the market today. 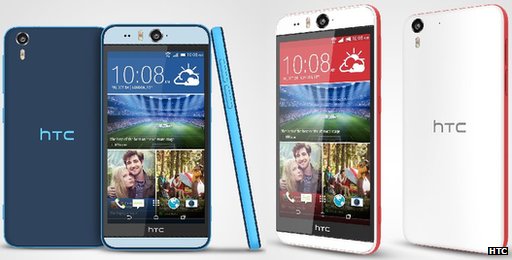 It also features face-tracking software that can monitor up to four people at once.

This can be used to identify, crop and position each person’s face so that they can all take part in a Skype video chat without having to worry about exactly where to stand.

“It’s much better for taking selfies than rivals as no-one else has a 13MP camera,” said Mr Jeronimo.

“And it could also prove interesting to the corporate world for video conferencing as the video image quality is good.”