More than 250 flood alerts have been issued across England, Scotland and Wales – with 12 severe warnings in place for Lancashire and Yorkshire.

Homes in Ribchester and Whalley, Lancashire, are being evacuated and people have been urged to stay away.

The Met Office has issued red weather warnings for rain in Lancashire and Yorkshire. Almost a month’s rainfall is likely to fall in one day in places.

Lancashire’s seven severe flood warnings – meaning flooding is expected and there is a danger to life – are for two locations on the River Ribble at Ribchester, three on the River Calder at Whalley, as well as for the River Wyre at St Michael’s North and St Michael’s South.

The five Yorkshire flood warnings are for the River Calder, Hebden Water and Walsden Water areas.

The two red Met Office warnings for rain have been issued for parts of Lancashire as well as for West Yorkshire and North Yorkshire.

They warn of “widespread flooding” leading to disruption, with possible danger to life.

Those being evacuated from their homes on Boxing Day have been told they can go to nearby Longridge Civic Hall.

Ribchester resident Alan Tomlinson told the BBC the situation was “pretty grim” with many homes at risk of flooding.

“The village is under siege really,” he said. “The routes to the south are cut off and the route to the north, to Longridge, is under threat.”

He said many residents had vowed to stay in their homes, moving upstairs if necessary – adding that the water in his cellar was already up to knee level. 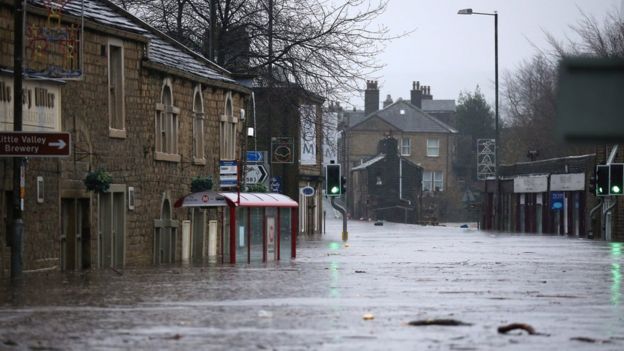 The River Calder burst its banks in Mytholmroyd, West Yorkshire 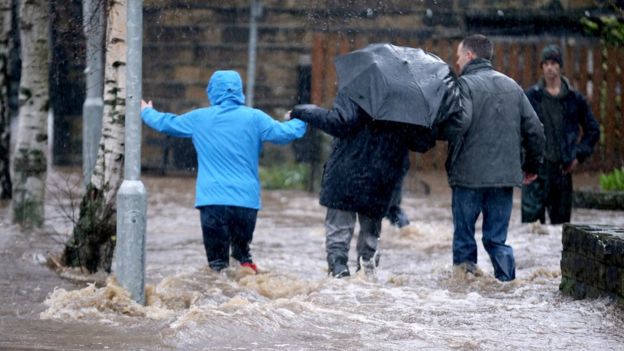 Rain continued to fall in the town on Boxing Day

BBC weather said rain would continue to affect south and east Scotland on Boxing Day, as well as northern England and north Wales, but that the worst hit areas would be north-west Wales, Lancashire and west Yorkshire.

Ben Lukey, of the Environment Agency, told BBC Breakfast: “We have been warning people to take action now to make sure that they keep themselves safe, to check out for vulnerable friends and relatives, to move valuable papers and other belongings to a safe place out of the way of water.”

Met Office forecasters said up to 120mm (5in) of rain could fall over the most exposed sites in northern England on Boxing Day – with the average rainfall for the whole of December in the North West being 145mm (6in).

On Christmas Day the Army was called in to support efforts to protect parts of Cumbria against further flooding and the government’s emergency Cobra committee met to discuss the situation.

People can access information from council websites and the Environment Agency Floodline.

The agency is also operating a phone line – 0345 988 1188 – which will be staffed rather than offering recorded information.