A couple from Hawick in the Scottish Borders have been unveiled as the winners of half of last Saturday’s record £66m National Lottery jackpot.

David and Carol Martin, both aged 54, appeared at a news conference at the Dalmahoy Hotel, south of Edinburgh.

Mrs Martin said she was stunned when her husband said they had won. “I thought he was just joking,” she said. “I couldn’t believe it.”

Mr Martin said it felt “great” to have landed the huge win.

The couple received a cheque for £33,035,323. The record jackpot followed 14 consecutive rollovers.

The Borders husband and wife said they were relaxing at home on Sunday morning with the lottery ticket on their mantelpiece and only checked it when a friend urged them to do so.

They used a mobile phone to check the numbers and the first line contained all six winning ones.

“If we had won £50,000 we would have probably been dancing round the living room,” said Mr Martin. 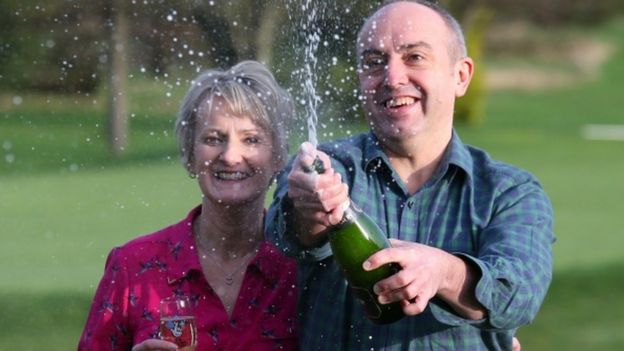 Mr and Mrs Martin bought their lottery ticket in a supermarket

“But when we were sitting looking at each other and we had won £33m we didn’t speak to each other for about five minutes.

“We were in total shock.”

The first person to be told the news was their 26-year-old daughter, Lisa, who lives in Australia.

Mr Martin said she had thought they were “pulling her leg” when they told her the scale of their win.

They now plan a family reunion this weekend to begin planning their futures.

“My daughter’s in Australia so that will be the first purchase, probably a first class flight home from Australia,” said Mr Martin.

Mr and Mrs Martin said they intended to take early retirement as soon as possible.

Mr Martin has been working for the last eight years for Borders Care and Repair (part of Eildon Housing Association) which helps elderly and disabled people fit specialist equipment in their home.

Mrs Martin has worked in the local chemist for most of her working life.

The couple, who have been married for 28 years, said they would love a new home in the country, near where they live now, and perhaps a holiday home in the sun.

They also intend to help their family and closest friends. 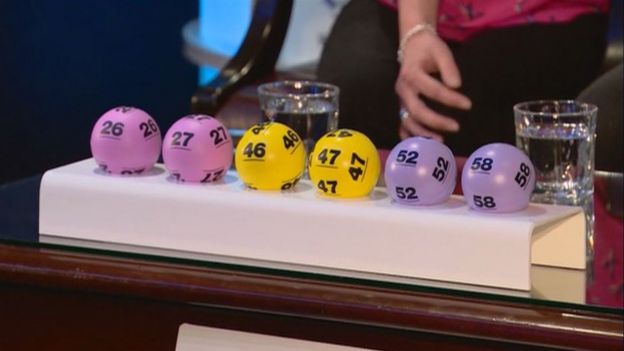 Mr Martin said they might look at some ways to help their home town which has been badly affected by flooding recently.

“It has been everywhere with the flooding, not just Hawick,” he said.

“It is something we will look into. Hawick is a tight-knit community.”

The couple insisted they would not be changed by the win.

“It will certainly change our lives but as people it won’t change us,” said Mr Martin.

“We were happy without the money so hopefully we will be happy with it.”

Even though the prize total is shared, it is still the biggest National Lottery win.

However, Saturday’s prize is still dwarfed by the the biggest UK win in the Euromillions lottery, a draw where prize money comes from ticket sales in several European countries.

In this article:National Lottery, Scotland