The Hatton Garden jewel raid was the “largest burglary in English legal history”, a court has been told.

Hugh Doyle, 48, is charged with one count of conspiracy to conceal, convert or transfer criminal property between 1 January and 19 May this year.

Prosecutor Philip Evans told the court “this offence was to be the largest burglary in English legal history”. He added that “at best” about one third of the property had been recovered.

Burglars breached 73 boxes, of which 44 were being used.

The court heard the 44 boxes were rented by 40 victims and that all of the owners traded mainly in jewellery, loose precious stones and precious metals.

“What has become apparent from this process is that the items which have been recovered are in the main the lower value items that were stolen,” Mr Evans said. 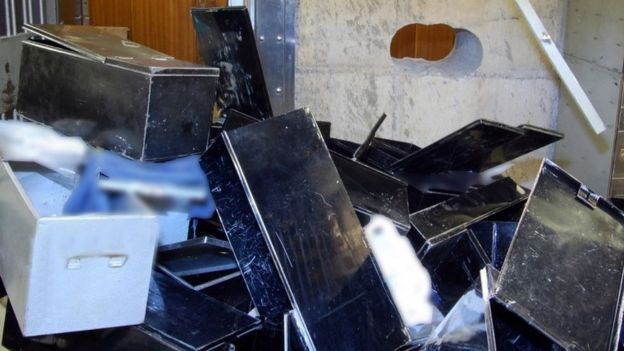 The jury was shown 3D images of Hatton Garden Safe Deposit that revealed the damage the burglars caused which included broken doors and gates.

They were also told much of the evidence had come from mobile and landline telephones data, and that the burglars had left no “forensic trace”.

He said the burglary was arranged during Friday night meetings at The Castle pub on Pentonville Road in Islington.