A leading Muslim organisation in the US has evacuated its headquarters in Washington after receiving a hateful message and white powder in the post.

Two employees of the Council on American Islamic Relations (CAIR) were initially quarantined in the office.

A note reading “die a painful death, Muslims,” was in the envelope with the powder, the group’s lawyer said.

Initial tests showed that the powder is not hazardous, and the quarantine has been lifted.

The BBC’s James Reevell at the scene says the package is now being passed to the FBI for further inspection.

Hazardous materials crews locked down the building and surrounding area shortly before 14:00 local time (19:00 GMT), while staff from CAIR waited outside.

In recent days, President Barack Obama has warned against anti-Muslim sentiment in the wake of deadly terror attacks in San Bernardino, California.

The Muslim group’s leaders said that threats were not uncommon, and had increased since the attacks in Paris about a month ago.

Mr Awad tweeted that the office was “evacuated by DC Fire Dept after receiving envelope with suspicious powdered substance [with] hate message”. 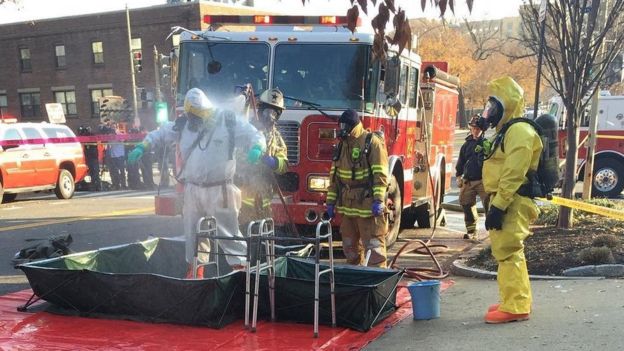 The group’s lawyer posted a message on Facebook that said: “It’s frightening to experience the hate manifest itself to such a real level. This will not deter us from continuing to protect the civil rights and liberties of all Americans.”

Police cordoned off the area, which is located about a half-mile (0.73km) from the US Capitol building.

According to its website, the CAIR is an “organisation that challenges stereotypes of Islam and Muslims”.