Google has announced three new Android-powered, Nexus-branded devices, comprising a set-top box for TVs, a tablet and a smartphone.

The machines are all designed to showcase the forthcoming update to its operating system, codenamed Android Lollipop.

The Nexus Player marks the introduction of Android TV, Google’s latest bid to get a foothold in the living room.

Experts noted that the firm had tried and failed with set-top boxes before.

However, Hiroshi Lockheimer, vice-president of Android engineering, suggested the company had learned from its past mistakes.

“On Google TV you could get a lot of apps, but a lot of the versions were just big tablet versions on a 50in screen that just didn’t feel right,” he explained.

“[Now] we’re much more opinionated about what an app should look like on a TV set, so we’ve been working very closely with app developers in the TV and content space over the past months on optimising their applications. 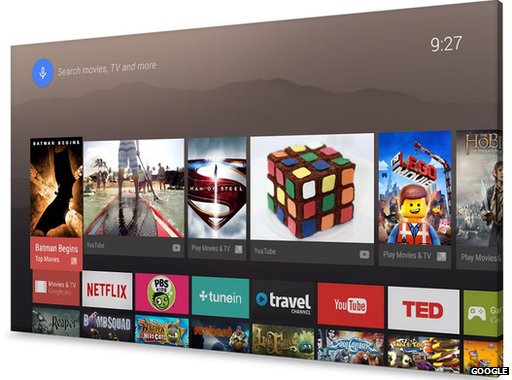 “You’ll see a much more focused set of applications that are higher quality.”

Apps have to comply with a new set of guidelines – such as supporting a remote control – before they will be added to Android TV’s version of the Google Play store, he said.

The Nexus Player is a set-top box built by Asus and featuring an Intel chip. It will cost $99 (£62) when it launches in the US and Canada in early November. 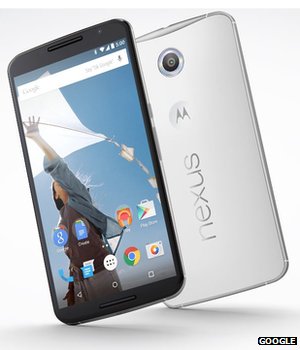 The Nexus 6 is made by Google’s Motorola division, which is being sold to Lenovo

It is bundled with a remote control with a built-in microphone, and owners can buy an add-on controller if they want to play video games.

In addition, Google has announced that Sony, Sharp and Philips will be building Android TV into forthcoming TV sets, and that more manufacturers will be unveiled at a later date.

However, neither of the two biggest television makers – Samsung and LG – have agreed to support the platform at this point, although Mr Lockheimer said that Samsung was at least “studying” it.

Although the previous Google TV platform was scrapped, the search giant has had limited success with its Chromecast TV dongle – it says it has sold millions but could not provide a specific number. Chromecast supports a smaller set of apps than Android TV since it was not designed for games.

Even so, one market watcher has doubts about the new platform’s chances.

“Google is going to keep trying with this, but that doesn’t mean it’s going to succeed,” said Ian Maude from the consultancy Enders Analysis.

“This doesn’t look very different from Amazon’s Fire TV or other devices out there – there’s nothing that jumps out at you.

“And Google has an additional hurdle, which is that some broadcasters and TV manufacturers are particularly nervous about getting into bed with it because they fear being disintermediated – in other words undermined – because Google would now be controlling the interface.”

The other new devices are: 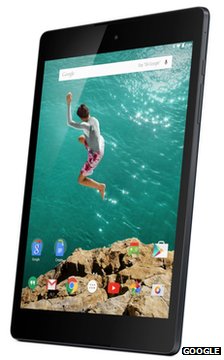 Mr Lockheimer drew attention to the fact both smart devices featured metal exterior parts, which he said gave them a more “premium” feel than the all-plastic shells used by earlier Nexus hardware.

The Nexus 6 will be made available in 26 countries, including the UK, in November and has been priced $649 (£407) for the contract-free 32 gigabyte edition.

One analyst was surprised by the prices.

“They’re definitely not cheap, which is interesting because that seems to be a bit of a change in strategy,” commented Carolina Milanesi from Kantar Worldpanel ComTech.

“Google has obviously gone for more expensive materials, which might signal it is going after the enterprise space.

“Businesses are less sensitive to price and look closely at the durability of devices, plus we know that the next version of Android has incorporated enterprise-friendly features.

“The other thing is that a 6in phone is a form factor that IT departments might view as a good two-in-one option, to avoid having to give staff both a tablet and a phone.”