Opinium/Observer poll also finds widespread support for service with 77% saying it should remain free to use.

More than four out of 10 voters – including over half of those who support Labour – would be prepared to pay more in tax if they knew the extra money would go to the NHS.

The survey showed very strong support for maintaining the current rule that NHS treatment should remain free at the point of delivery, with 77% agreeing that this must continue to be the case, regardless of the cost to taxpayers, compared with only 6% who disagreed.

With many experts predicting that the NHS will face huge annual funding shortfalls by 2020 unless extra money is pumped in, there is increasing debate at Westminster over whether a new “NHS tax” is needed, and would win public support.

One idea being examined by Labour is to raise national insurance contributions to create a special fund, the proceeds of which would be dedicated to providing health and social care services.

Leading Tories, including former health secretary Stephen Dorrell, and Sarah Wollaston, the Conservative MP for Totnes and new chair of the health select committee, have said spending on health will have to rise in real terms in the next parliament if services are to be maintained.

Recent figures based on data from NHS England and the Nuffield Trust suggest that NHS costs alone will go from £95bn a year now to more than £130bn a year by 2020.

The public seemed more resistant to the idea of paying some sort of membership fee for the NHS with just 32% supporting the idea, against 42% who opposed it. 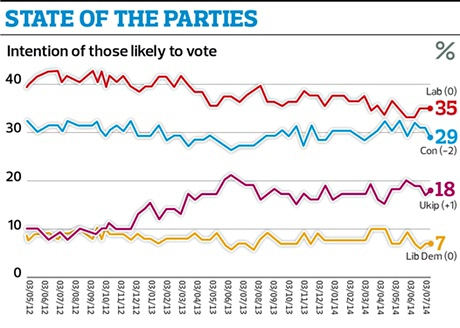 David Cameron’s personal rating has dropped since the last poll by 5 points to -15% (those who approve of his performance, against those who disapprove) while that of Labour leader Ed Miliband is unchanged on -26%.