“Do you want to pick it for me?” If the selection dilemma on Eddie Jones’s hands wasn’t clear enough, his response to a question over his next England squad made sure that everyone was fully aware he has some big calls to make in the next few days.

England have beaten South Africa and Fiji in consecutive weeks, scoring 96 points in the process through 13 tries, to leave head coach Jones with something of a conundrum in front of him.

With Argentina up next, Jones knows his England side must keep on improving if they are to achieve a year unbeaten under his stewardship in 2016.

The problem is which side is his side? Jones has been keen to stress that squad depth is a huge part of his plan to make England the best rugby team in the world, although with players pressing their case to start next Saturday’s encounter, he still needs to pick the best 15 players that meet his hefty demands.

Jones’s front five looks settled, at least it does until the Saracens pairing of George Kruis and Maro Itoje come back into contention once they have recovered from injury. His half-backs appear to pick themselves too, with Ben Youngs and George Ford growing in confidence as the year goes on. But there are questions elsewhere, particularly in the back-row, centres and back-three.

It’s a simple one here as Mako Vunipola, Dylan Hartley and Dan Cole have barely put a foot wrong this autumn. Hartley’s leadership of the side has remained committed, and given the controversy that surrounding his appointment, he now goes under the radar. Vunipola remains one of the best props in world rugby when it comes to running in the loose, while Cole’s experience is shining through in the scrum, though he will be keeping one eye on the rapidly improving Kyle Sinckler come the Six Nations.

There was reason to fret for England fans when Kruis and Itoje were ruled out of the autumn internationals, though the former is rumoured to be nearing an early return. However, Joe Launchbury and Courtney Lawes has slotted in seamlessly, and it would be foolish to replace one of them this weekend.

We come to over first big decision, as both Tom Wood and Teimana Harrison have pressed their claims to wear the No 7 shirt against the Pumas over the last two weeks, while Jones has been keen to play up Nathan Hughes’s impact from the replacements. Hughes has come on in both matches so far at openside flanker, and you get the impression his first start for England is not too far away.

Harrison was replaced after 46 minutes on Saturday but he impressed in areas that included the breakdown and lading the defensive line, while he also registered his first try for England. It was enough to warrant another outing this weekend, though Wood put in a committed shift the week before against supposedly tougher opponents – South Africa’s defeat by Italy on Saturday puts that idea in doubt. While Harrison deserves another outing, his early withdrawal suggests Wood may be back in the side next week.

Ben Youngs and George Ford. Next.

Now we get to the big decisions. Owen Farrell has the 12 shirt nailed down, but who lines up outside him? Elliot Daly was nothing short of sublime in his first England start against South Africa, but he also looked equally at home on the left wing. He has pace to burn, holds a creative spark with both his hands and feet and knows how to read a game, not to mention enough power in his right leg to punish any side’s ill-discipline from 60m.

But Jonathan Joseph also looked the part against Fiji and bagged himself two tries to take his international record to 11 tries in 27 appearances, not too shabby for a centre. Both have looked slightly exposed in defence, but with space for Daly out wide, it looks like Jones is ready to give Joseph the nod once again this week.

Two matches, four wingers and four tries scored. So who do you pick out of Jonny May, Marland Yarde, Semesa Rokoduguni and Daly? All four individuals have their positives, but can a coach drop their players after they contribute significantly in putting 58 points past Fiji? With May still struggling with a knock suffered against the Springboks and Yarde sent back to Harlequins for the weekend as they took on Leicester, expect Daly and Rokoduguni to retain the shirts. 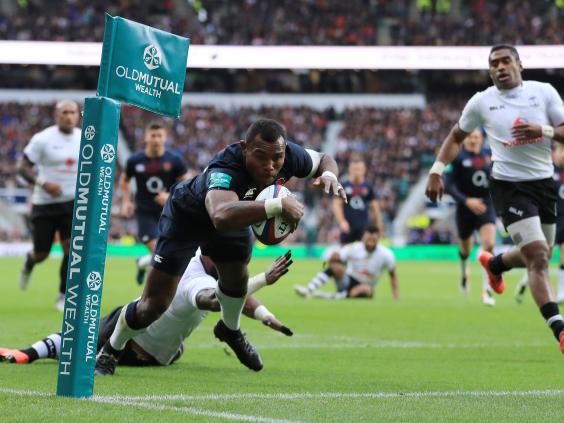 Rokoduguni goes over for his first international try (Getty)

No matter how well Alex Goode plays, you can’t see Jones dropping his Mr Dependable in Mike Brown. The Quins full-back was at the heart of every attack against South Africa and will have been rejuvenated from the rest he was afforded this weekend. Goode certainly impressed and offers as much a threat as Brown with the ball in hand, not to mention a better kicking game, but Brown’s assured approach and ability under the high ball sees him take the 15 shirt every time.