Blanket austerity across the crisis-hit countries of the eurozone was self-defeating. Germany’s analysis of what needed to be done was wrong. The European Central Bank (ECB) was slow to come up with a stimulus package designed to offset the demand-sapping impact of wage cuts.

Those were the main messages of an important International Monetary Fund (IMF) intervention into the debate about how the eurozone should have responded to the problems that affected five of its members – Greece, Ireland, Portugal, Spain and Italy. This quintet accounts for 30% of eurozone output.

The traditional IMF cure for a country in trouble is a solid dose of structural adjustment – tax cuts, privatisation, reforms of the labour market – designed to make the domestic economy more efficient, coupled with a devaluation that makes exports cheaper and imports dearer.

This recipe was obviously not available to countries inside the eurozone because they all share the same currency. Instead, the recovery plan involved internal devaluation, making an economy more competitive through a reduction in costs. Given that pay is the biggest element of these costs, it requires wage cuts – and thumping ones at that.

The IMF paper asks whether this policy actually works. Its conclusion is that if a single country cuts wages, the effect is positive both for that economy and for the eurozone as a whole.

But if five countries adopt the same strategy at once, there has to be action from the central bank to offset the demand-sapping wage cuts. Put simply, if millions of workers across Europe have less money in their pockets, they will consume less. That will affect their own economies and the economies of other non-crisis eurozone countries that export to them.

But, as the IMF economists note, there is a problem if official interest rates are already at rock-bottom levels. In those circumstances, central banks have to be a bit more creative if they want to counteract the recessionary impact of wage cuts. One solution is to resort to quantitative easing, something the Bank of England and the Federal Reserve did back when the slump was at its worst in 2008-09. 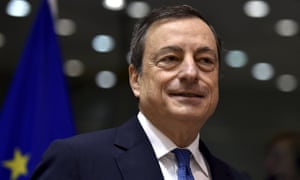 It took the European Central Bank a further five years before it embarked on its own QE programme, by which time sucking demand out of the eurozone economy had achieved predictable results: a double-dip recession, double-digit unemployment rates and a descent towards Japan-style deflation.

In a blogpost explaining the paper, the two IMF economists – Jorg Decressin and Prakash Loungani – stress that their organisation has “always advocated a comprehensive package that addresses both aggregate supply and aggregate demand”. They add that the fund was “one of the early advocates of supportive monetary policies, including quantitative easing, to boost aggregate demand in the euro area”.

The phrases “always advocated” and “early advocates” are significant. Mario Draghi, the ECB president, finally wore down German resistance to QE, but only after a protracted struggle and when it was clear, even to Berlin, that the eurozone was suffering from a severe lack of demand.

In one sense, the IMF analysis is a bit disingenuous. If, as the paper says, it knew from the start that internal devaluations on their own would not work, it makes the fund’s willingness to back bailout packages rather curious. But leaving to one side this blatant back-covering, the analysis is right. The eurozone has begun a slow and tentative recovery since the ECB stepped up its macroeconomic stimulus. Better late than never.