SPOILER ALERT: This weekly blog is for those who have been watching the new series of Doctor Who. Don’t read ahead if you haven’t seen episode eight – The Zygon Inversion.

‘When you’ve killed all the bad guys, and when it’s all perfect and you’ve got it exactly the way you want it, what are you gonna do about the people like you?’

In the end, the Doctor won by acting. His bluff about the empty Osgood Box had just the right effect in calling off the Zygon insurgency but, more broadly, Peter Capaldi won as the Doctor by acting. It was pointed out a while ago by our friends at the Radio Times that the 12th Doctor had yet to have his definitive “Doctor moment” – such as Eccleston’s “Everybody lives!” or Smith’s grand address atop Stonehenge, or even McCoy’s “unlimited rice pudding”.

Well, here it was this week, and then some, and then quite a considerable bit more. As he delivered his passionate, eloquent takedown of Zygon rebel Bonnie (Jenna Coleman on lipsmacking evil-twin form), this version of the Doctor was comprehensively nailed, skewering perfectly who this man is. That brusque exterior is a barely held together veneer to rein in a compassion and a frustration constantly trying to outdo each other within a heart as big as the Medusa cascade; an exasperated parent who can never do enough. Or indeed, you might say, a Scotsman. This Doctor has never been written better, Capaldi has never channelled Tom Baker more, that sequence is cemented instantly as the “Capaldi moment” in clip shows for the rest of time. 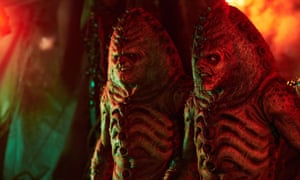 After last week, The Zygon Inversion took the action down a few notches, but the themes way, way up. And like all the world’s knottiest problems, the premise of all global conflict was undermined with startling simplicity, not through Lennon-ist peacenik soundbites but a determined, rational unpicking of the logic topped off with the doozy of a rug-pull; what is it you are actually hoping for? It’s a shame that the trifling divisions beneath all political and religious conflict seem more ingrained in real-life humans than they do in fictional Zygons, or that this episode will likely not be used in any real-life peace talks any time soon. Or indeed, that more of us aren’t like Osgood.

It was a risky game to attempt the sort of contemporary allegory that The Zygon Inversion knocked out of the park. And it actually ended up even more topical than was probably intended, in the wake of the Labour party conference. In saying he would never push the nuclear button, Jeremy Corbyn blew the cover that nobody would ever push the button really. Of course there was nothing in the Osgood Box; it was just important that everyone thought there was, just as half of Corbyn’s shadow cabinet think it’s probably important that people think Britain has a nuclear deterrent that it would use. Unfortunately for Andy Burnham, he doesn’t have the power to wipe people’s memories. (Not even with his leadership campaign material, boom-tish.)

‘You are a credit to your species’

Osgood was devised as the best of fandom. In contrast to the lone, angry typists a lot of people associate us with being, The Day of the Doctor brought in a youthful (rather than simply “young” ), enthusiastic cosplayer, and a female. It was little wonder that Ingrid Oliver’s performance won everyone’s hearts. Now, she’s being pitched as the best of humanity itself, her open mind and heart seemingly being what will hold the ceasefire together. The Doctor might have set Bonnie on the straight and narrow, but it’s the link with Osgood that will keep her there; neither will answer the question of which of them is which, “until the day that nobody cares about the answer”. A grinningly optimistic end to what could have been an incredibly grim story. And now, she has a first name! Praise be, Petronella. 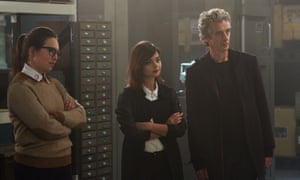 We’ve always been given to just accepting that the Zygons are shapeshifters without actually ever seeing how they do it. So it was a cunning bit of body horror to see the poor, civilian sleeper agent, trapped midway through a transformation he is desperately trying to avert. “I’m not part of your fight. I never wanted to fight anyone – I just wanted to live here.”

Knowledge of Jenna Coleman’s departure has clearly provided fuel for this year’s arc-speculation, with episodes teasing us shamelessly about what fate might await Clara. Now Peter Capaldi has further lanced the boil, speaking to Nick Grimshaw on Radio 1 this week. “I don’t want to go into what happens, because it’s very clever what happens in it, but it’s very sad,” he teased. “It’s not quite what you think’s going to happen. You think what’s going to happen is going to happen, but then something else happens.

“That’s what’s wonderful about Doctor Who. It’s always clever the way these things are done. It’s not quite as straightforward as it appears. Get lots of hankies ready, that’s what I would say. It’s sad over a number of weeks.”

If you’re going to bring in the daughter of beloved old goat the Brigadier, you might as well have some fun with it. So as Kate recounts to the Doctor how she escaped the Zygons, the glee on Jemma Redgrave’s face is palpable as she reels off her father’s famous catchphrase: “Five rounds, rapid.” As coined here in The Daemons from 1971.

The sonic specs controversy rages on: “Isn’t that a bit pointless? Like an invisible hearing aid?”

It isn’t actually established anywhere within the canon that the Doctor’s first name is not Basil, is it?

And indeed, “Doctor John Disco.” And why not? Disco is a much better surname than Smith.

Once again, Clara is well aware that she is an excellent liar.

“Most of your kind don’t want that.” “Then it’s time we stopped giving them a choice.”

It’s worth reporting comments Steven Moffat made in an interview with Variety this week regarding the show’s potential longevity: “It’s definitely going to last five more years, I’ve seen the business plan. It’s not going anywhere. And I think we can go past that. It’s television’s own legend. It will just keep going.”

Clara’s prison-house inside the Zygon pod recalled the dream states from Last Christmas; she even appears to do a “dream check”, to try to work out if it is a dream. It also brought to mind Donna’s domestic fantasy from Silence in the Library.

In this article:Doctor Who, Fantasy, Peter Capaldi, Television