Spoiler alert: this blog contains plot details for Hell Bent, episode 12 of the 35th series of Doctor Who on BBC1

‘Run like hell because you’ll always need to. Laugh at everything because it’s always funny. Never be cruel and never be cowardly and if you ever are, always make amends.’

Does he know? After a psychedelic, head-spinning finale that piled twist upon revelation on top of rug pull, Steven Moffat could not resist one final question mark that’s likely to keep us guessing until the end of everything. As Clara imparted the wisdom the Doctor had given her about memories becoming stories, surely knowing he wouldn’t remember, so couldn’t have told her in the Diner Tardis, he tacitly let it go and walked away. Was she giving him just enough information to work out that Clara was OK, or had the whole conversation been the final flourish in the pair’s dance, knowing the universe could no longer handle their unique type of Hybrid, and nobly sucking it up? It was a neat reversal of last series’ closing moments, them both lying to each other in a cafe, but this time, with the comfort of resolution.

Considering the stakes involved ripping apart all of time itself and an epic foray into the very core of the show’s mythology, here was an oddly intimate finale. Part western, part poetic contemplation, told with the deft flashbacks that are the writer’s trademark, in the end it was a beautiful character piece and a fitting exit for Clara. It would never have been plausible for her to go back to a normal life – she was getting the best of both worlds as it was. But neither could the Raven have been the end.

Moffat said recently that Clara was no longer the apprentice, she had “sort of become the Doctor”. But audacious doesn’t even begin to cover him following through on that all the way. This is where we leave Clara Oswald, zipping around time and space in her own Tardis, with her own companion Ashildr, stuck in the moment between two heartbeats, accepting of her fate, but taking her sweet time about it along the way. Crucially, she turned the Doctor’s duty of care back onto him, flip-reversing the nature of Donna Noble’s exit years ago. In ostensibly killing off his companion, Moffat delivered possibly the most upbeat ending we’ve ever seen.

That line, “never be cruel, never be cowardly”, originates from a description of the Doctor written way back by veteran Who writer Terrance Dicks, and those words stand as an emblem of everything our hero holds himself to be. It’s why the War Doctor didn’t think he lived up to the title. And it’s why, after the loss of Clara caused him to fall short of that standard, they both knew that they could not stay together. They were bad for each other. Missy, “the lover of chaos”, knew exactly what she was doing when she put them together, the

‘The Doctor is back on Gallifrey. Took him four and a half billion years to get here. What do you think he’s gonna do? Why, he’s stealing a Tardis and running away. Bye!’

Meanwhile, Moffat’s take on Gallifrey grows richer and more intriguing. We’d always presumed the place to be a fusty, ceremonial place, sort of a sci-fi House of Lords, watching over the universe from a considered distance. And as long as they’ve featured in the show, they’ve always been liable for corruption. But this Gallifrey is an altogether darker construction, the Time Lords in command of a formidable military of underlings, the civilian Gallifreyan peasants looking more and more like the planet’s Have Nots, and a Lord President driven ever more ruthless with power.

As we revisit the barn where the War Doctor contemplated setting off The Moment, his standing as a war hero, never mind a Hybrid, is the stuff of Gallifrey legend. And here was the nub of the story we’ve been building toward all series. A war hero is the very last thing this guitar-wielding iteration would choose to be. The fact that he embraces it so wholeheartedly in his quest to get Clara back is the measure of how much he’s changed. Evidently, four-and-a-half billion years trapped alone in your own bespoke torture chamber is enough to take it out of a man. 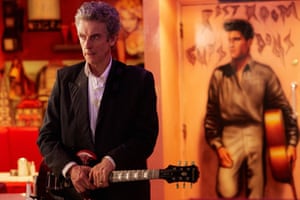 Always nice to see a Dalek and a Cyberman and a Weeping Angel, even if the mummifying versions we encounter in the cloisters felt like a box ticked. When the monster in this episode is the Doctor-Clara hybrid itself, this is Doctor Who, so it still needs some monsters to look at as well.

If the Doctor really doesn’t remember Clara, does that mean he has also forgotten his ordeal in the Confession Dial? One would hope so – that level of post-traumatic stress in our hero would not play especially well in a Christmas special. But more than that, since Clara was the tempering force that mellowed and humanised him, will the Doctor going forward be more like the grumpy killjoy from last year?

Where to begin? Rassilon, portrayed here with chilling authority by Donald Sumpter, is the Big Daddy of Gallifrey mythology. The founder of Time Lord society, he developed the time travel technology along with Omega (who thought just for a minute that we might be getting Omega?), and became the first Lord High President. He first appeared on screen in The Five Doctors, portrayed as an apparition by Richard Mathews. Over the years, legends of him as a wise and benevolent ruler fell into question – and indeed, by the time he appeared in The End of Time, played by Timothy Dalton, he had become ruthless, megalomaniacal, prepared to risk the end of time itself to safeguard his own survival. And now, as Rassilon the Resurrected, he looks to have degenerated into an all-out despot. 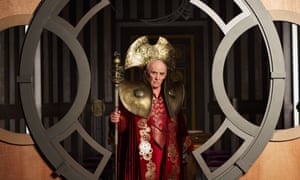 “It’s always four knocks,” was of course a reference to the sound of drums, the tapping in the Master’s head, and Wilf’s knocking on the window of the radiation chamber in The End of Time.

Claire Higgins’ Ohila, from the Sisterhood of Karn, is becoming something of a series regular. The way she slaps the Doctor down, yelling “boy!” … Clearly she is some sort of mother figure.

Not long now until the Christmas special, when Alex Kingston returns to team up with Peter Capaldi in The Husbands of River Song.

In this article:Doctor Who, Fantasy, Television