Spoiler alert: this blog contains plot details for Heaven Sent, episode 11 of the 35th series of Doctor Who on BBC1

Well, to quote some of the more mischievous contributors below the line, that was no Robot of Sherwood. A confession: the first time I watched Heaven Sent, I barely had the faintest clue what was going on. And I’m a professional fanboy, and so if I am flummoxed, it’s a little terrifying to contemplate what keen viewers such as, say, my mum, will have made of this.

Which is not to get too far back into the whole “is Doctor Who too complicated now?” debate. You don’t, after all, get people complaining that Game of Thrones is incomprehensible to people who only tune in on occasional weeks. But the fact remains that for a large proportion of the audience is likely to be lost completely

The good news is that, given a second viewing – and armed with the BBC’s list of instructions to journalists (eg, “you will not reveal that the skulls are the reincarnation of the Doctor”) – all the pennies suddenly dropped at once during that breathless final sequence. This was as exhilarating as Doctor Who gets 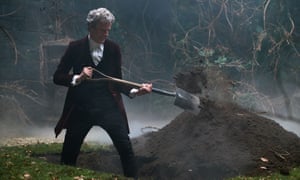 And so to recap; the Timelords, for reasons yet unknown, recruited Ashildr/Me to ensnare the Doctor into his own hellish “confession dial”, a revolving castle where he is stalked by a monster that embodies his greatest fear. He spends eternities confessing, until losing his patience and fighting back, refusing to play ball. And when he finally reaches some sort of summit of his ordeal, the Doctor realises that, every 100 years, a bird comes and pecks the diamond wall, slowly allowing him to chip through to what lies beyond. He realises that if he sparks an electrical charge by frying his own brain, it will force a reverse-teleport, allowing the version of himself stuck back in the teleport in 2015 to be able to start the whole process again. He would then remain there for ever-vaster lengths of time until, after several billion years, he will finally break through the diamond wall, and thus find Gallifrey. Something like that? Is it? Still – Gallifrey!

It’s no headline that Capaldi is very good at his acting so, after last year’s mercurial turn in the mercurial chamber-piece Listen, it was clearly irresistible to take that sort of device to the next level and beyond. The last time a single-hander worked on the telly was when the regal June Brown took on a solo EastEnders as Dot gave a monologue, into a tape-recorder, ashamedly discharging herself of the care of her husband Jim, in a painful parallel to the real-life plight of stroke-victim actor John Bardon.

Pulling off something like that in an action show is infinitely harder, and yet Steven Moffat somehow gets it to work, as the grief-stricken and increasingly demented Doctor, as confused as anyone, mixes up voiceover with flashback with talking-to-dead-Clara, pieces to camera and shouting out loud at unknown enemies. 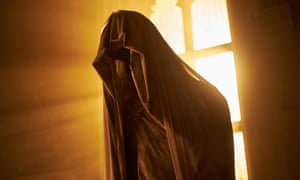 Last week, a couple of commenters misread our preview of this episode of the Doctor “flying solo” as and assumed that nobody at the Guardian had ever seen 1976’s The Deadly Assassin. Actually, in its depiction of the Doctor trapped inside a matrix where little could be trusted or made sense – like Gallifrey – Heaven Sent is to that story what The Magician’s Apprentice was to Genesis of the Daleks. In lots of ways, this series has been Capaldi and Moffat’s love-letter to Tom Baker’s mid-70s purple patch.

Say what you like about the showrunner having potentially seen off half his audience with such an audacious move beyond fanboy-dom. Fan boy here even went back and watched 2005’s Aliens of London (the one with the farty green Slitheen) and was genuinely torn as to which he preferred. But it would be daft to deny that this show-offy flexing of the writerly muscle cements the guy as an Adonis of his craft.

Here’s a knotty one. The cloaked creature is named as the Veil (and portrayed by Jami Reid-Quarrell, AKA Colony Sarff in The Magician’s Apprentice, fact fans). Yet there already exists a race known as the Veil in the Whoniverse, from The Sarah-Jane Adventures story Planet of the Judoon. They too were green and reptilian, but operated in hugely different ways to this blighter from the confession dial, tending to be more mischievous and shape-shifty. So: do we treat this as a coincidence or a deliberate mistake, or just a mistake? Personally, I’d say the best way of looking at it is; you would still roughly categorise a pug and a doberman as “dogs”, just as you would still roughly categorise Kylie and George Osborne as “human”. Species, as we all know, can vary wildly. 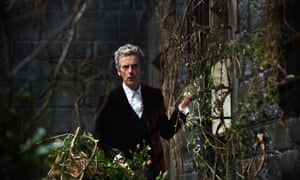 So, @PhaseShift was right last week about Gallifrey returning, because what else could have been about to happen? But it isn’t clear whether links between the “Skaro degradations”, the “Could’ve-Been King” and the Knightmare Child were co-incidences, insanely detailed continuity or so many Theories More Bonkers Than What’s Actually Going On. For now, there are plenty of things we need to know. Where and when is Gallifrey hiding – and, probably more to the point, why? What is the Hybrid really? Where did the Doctor find anything to eat while in the confession dial?

• The latest on the velvet jacket which I know you’re all desperate to hear: the official Twitter account this week made particular note of it, but insisted that it was red. The plot thickens.

• “I hate gardening! What sort of person has a power complex about flowers? It’s dictatorship for inadequates.”

• It wasn’t quite the single-hander that was promised. Was there something in Jenna Coleman’s contract that stipulated she needed to somehow feature on screen for her to be paid? And can somebody confirm whether this was Doctor Who’s first “arse”?

• “I’ve finally run out of corridor. There’s a life summed up.”

• The Brothers Grimm were on the Doctor’s darts team.

Gallifrey stands! So what the hell is going to happen now? We’ll find out, quite literally, in the series finale, Hell Bent. (To American readers, yes “series finale” means the very end of the show to you, but British readers get upset if we use “season finale”. Rest assured, Doctor Who has not been axed!)

In this article:Doctor Who, Drama, Fantasy