Institute of Education research shows teaching methods in China and South Korea are not only factor in high grades. 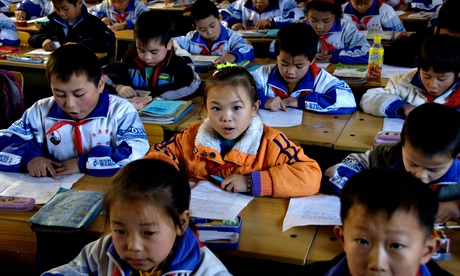 The study found that children of immigrants from high-achieving East Asian countries are still two-and-a-half years ahead of their western peers by the time they are 15. Photograph: Alamy

A new study has cast doubt on the current enthusiasm in the west for copying teaching methods in China and South Korea, where children score highly in international tests, suggesting that cultural factors beyond school also play a part in their success.

Politicians and policymakers from the west, where children gain lower marks, are avidly studying the education systems of those countries that regularly top the Pisa international league tables in the hope of emulating their achievement.

But a new study from the Institute of Education (IoE) at the University of London concludes that the children of immigrants from these countries when educated elsewhere continue to score just as highly within no-better-than-average school systems.

The study, by Dr John Jerrim, reader in education and social statistics at the IoE, found that children of immigrants from high-achieving east Asian countries are still two-and-a-half years ahead of their western peers by the time they are 15, even when they are educated alongside them in western-style schools.

Jerrim studied the performance of more than 14,000 Australian schoolchildren who took the 2012 Pisa maths test, set by the Paris-based Organisation for Economic Co-operation and Development (OECD), and found that second-generation immigrants from east Asia, who were mostly of Chinese origin, scored on average 605 points – 102 points more than Australian-born citizens.

Their results were only beaten by the Shanghai region of China, which came out top in the Pisa rankings. By contrast, second-generation immigrants in Australia from the UK scored 512 in the Pisa maths test. In England, children of Chinese origin have the highest GCSE scores of any ethnic group – last year, 78% gained at least five A*-C GCSEs, compared with a national average of 60%.

The UK, in common with other countries, has been keen to learn from the success of Asian education systems. In July, the Department for Education (DfE) announced an £11m initiative to bring 50 Shanghai maths teachers to England this year to help raise standards. The Chinese teachers will provide masterclasses in 32 “maths hubs”, which will form a network of centres of excellence across England.

Yet Jerrim warns policymakers not to be guided by Pisa scores alone. “High-ranking Pisa countries may well provide western policymakers with valuable insights into how their own education systems might be improved. But any subsequent policy action must be supported by a wider evidence base – policymakers should not rely upon Pisa alone.

“For instance, one does not want to erroneously conclude that rote learning helps to improve children’s maths skills, simply because this technique is often practised within east Asian schools. Indeed, the fact that children of east Asian heritage perform just as highly in the Australian education system (whose schools and teachers do not routinely use such techniques) would actually seem to contradict such views.”

Jerrim continued: “The attitudes and beliefs east Asian parents instil in their children make an important contribution to their high levels of academic achievement. Yet as such factors are heavily influenced by culture and home environment, they are likely to be beyond the control of schools. Greater recognition needs to be given to this point in public discourse. Indeed, policymakers should make it clear that there are many influences upon a country’s Pisa performance, and that climbing significantly up these rankings is unlikely to be achieved by the efforts of schools alone.”

Children taking the Pisa test completed a background questionnaire asking about their parents’ country of birth, attitudes to education, their own aspirations and out-of-school activities, which Jerrim used to explore other factors that may play a part in the immigrant children’s school success. His study then used advanced statistical analysis to gauge their relative importance.

Jerrim concludes that family background factors such as parental education accounted for almost 20% of the 102-point achievement gap between East Asians and native Australians – half of the 276 second-generation east Asian children had graduate fathers, compared with only a quarter of the 6,837 Australian-born children. A further 40% of the gap between east Asian and native Australian children (the equivalent of a year’s school progress) was accounted for by a range of school factors.

“I found that, on average, east Asian families send their children to ‘better’ schools than native Australians do,” Jerrim says. “We can’t be sure why this occurs. Their school selection may, of course, reflect the high value east Asian parents place on education. What is clear, however, is that a range of school effects (including the positive influence of fellow pupils as well as the quality of the school) form a key part of the reason that east Asian children in Australia are doing so well.”

A combination of out-of-school factors and personal characteristics accounted for another 25% of the Pisa score gap. East Asian children spent substantially more time studying after school (15 hours a week) than native Australian teenagers (nine hours). They had a very strong work ethic and were more likely to believe that they could succeed if they tried hard enough – although there was no evidence that they had put more effort into the Pisa maths test. They also had higher aspirations; 94% of them expected to go on to university, compared with 58% of the native Australians.