On a circular hill, near the convergence of three rivers, a fairy who’d wept a river of tears was comforted by a dragon prince. The fairy, Au Co, and the dragon prince, Lac Long Quan, fell in love and bore a sac of 100 eggs. From these 100 snow-white eggs, the Vietnamese people were born.

At this mythical spot, upstream from Vietnam’s capital, Hanoi, the nation’s ancient kings honoured their founding ancestors by building temples. Today, the Hung kings’ temples are rooted in a region where time-honoured traditions are upheld and life seems to move at the same pace as it perhaps once did when Au Co and Lac Long Quan roamed the land.

I was visiting the area on a new Pandaw cruise, the first to navigate the Song Hong or Red River, which passes through Hanoi, and its tributaries in northern Vietnam. Pandaw, which has been operating on the Mekong since 2003, decided to venture north this winter, since the Mekong has become overcrowded with cruise traffic.

At Hung Lo village, a group performed a traditional xoan song recital that honours the royal ancestors. Afterwards, the singing villagers showed us rice noodles, hanging on horizontal poles like clothes on a washing line, set in the temple courtyard that was all sweeping dragon roofs and red flags. Conical hat makers demonstrated how Vietnam’s distinctive bamboo-framed hats, worn by paddy workers, are crafted.

The Red River Delta is second only to the Mekong Delta as a rice-growing territory. Everywhere on our route took us through the iridescent green sea of paddy fields as we listened to tales about the pivotal role that rice plays in Vietnam’s cuisine and culture. At the ancient village of Duong Lam we discover how different types of rice are chosen for particular soils, before we supped on rice wine in the 300-year-old home of a Catholic family.

At Dong Ho village, we visited an artist who combines sticky rice liquid with oyster powder, mixed with natural dye from burnt bamboo leaf, seeds, and indigo in order to fashion rare folk paintings; at Yen Duc, we watched water puppets, made from the jackfruit tree, enacting rural scenes of rice growing and harvesting on a liquid stage. And at Mai Chau, an exquisitely beautiful high-altitude valley, we learnt how hovering dragonflies play a role in the rice farmer’s life.

“Rice farmers watch dragonflies to predict the weather. If they fly low, there will be rain; if they fly high, it will be sunny, in which case the rice farmer will rise early to tend to his paddy before the sun becomes too hot,” our guide, Duc, explained.

After wandering through the paddy fields we dined on rice dishes at the exceptional Mai Chau Ecolodge, where tantalising fresh spring rolls with shrimp and pork were wrapped in a rice paper parcel, and steamed rice was served with grilled pork and fresh, green tea leaves.

For the Vietnamese, rice is the staff of life. Every day in the Pandaw dining room we would be served this key ingredient of Vietnamese cooking, from banh xeo, a rice crêpe stuffed with bean sprouts, vegetables, herbs and tofu, to stir-fried Halong Bay prawns and spring loofah with fragrant steamed rice. 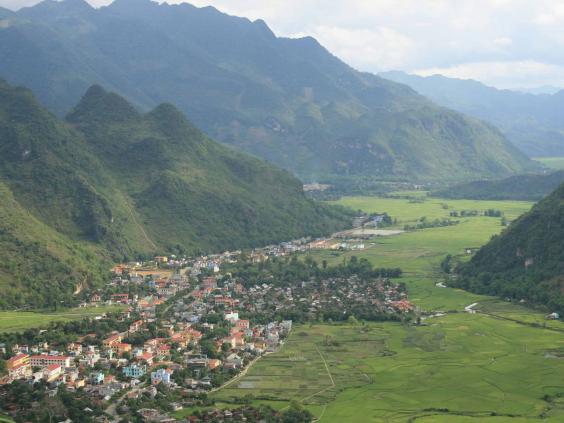 After three-course lunches and a Hanoi beer, afternoons were spent idly gazing at the scenery drifting by, from the loungers and sofas on deck.

Clouds flirted with lofty peaks and forests were mirrored perfectly in the still waters that would occasionally ripple like silk. Small sampans puttered about, their paddles dappling the quiet river. Gently sloping banks, some patched with maize, bananas or sugar cane, shelved into the river’s edge that anchored duck pens, small brick factories and bamboo jetties.

Pandaw’s RV Angkor is a teak and brass colonial-style boat furnished with 16 cabins that host 32 guests. She navigated the northern pea-green rivers at a leisurely pace, as she made her way through the sun-baked delta. From Viet Tri, we journeyed 576km upstream to Hoa Binh and Mai Chau before returning downstream through Hanoi and out to Halong Bay. Our journey combined Vietnam’s river pastures, villages dedicated to arts and crafts, and snapshots of local and international industry. At the Russian-built Hoa Binh Hydroelectric Power station – one of the world’s more unusual cruise stops – we descended into the turbine hall whose background was a huge piece of colourful illuminated socialist propaganda. 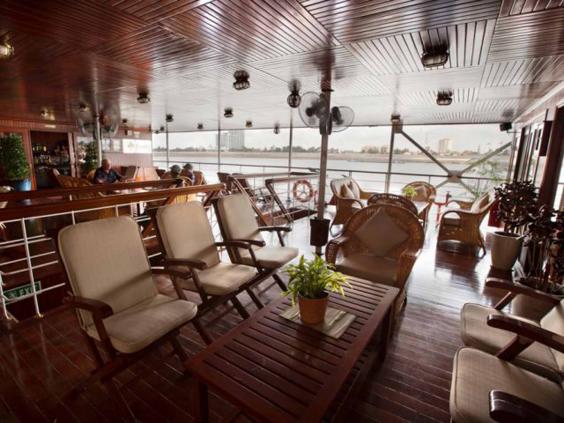 On our penultimate day, we sailed past huge shipping containers at Haiphong, Vietnam’s second largest port. With early evening cocktails in hand on deck, we were fascinated by the parade of outsized ships, low slung cargo boats that looked like crocodile snouts ploughing through the water, raised fishermen’s shacks that resembled white dog kennels on stilts, and the clink and clank of heavy industry.

From Haiphong, the Angkor emerged into the teal-green waters of Halong Bay, where soaring limestone karsts loomed over the boat. Legend relates that Lac Long Quan sprayed a thousand pearls from his mouth, which erupted into the hundreds of karsts now scattered in the bay. Sitting on deck under a grey-blue sky, it wasn’t hard to conjure up a descending dragon (the meaning of Halong) amid this other worldly seascape. 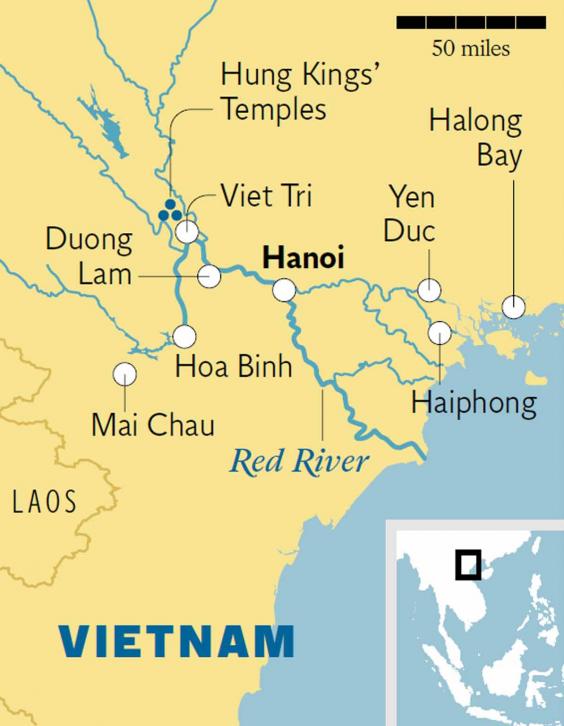 After Halong Bay the boat made its way back to Thang Long (ascending dragon), the ancient name for Hanoi. Although the city is the capital of Vietnam, the majority of Vietnam’s ancient kings ruled from the Red River Delta area from 2000 BC, their seat of empire following Au Co’s river of tears that led from the Hung kings’ temples to the sea. Sailing through this intriguing heartland had opened an unforgettable window on the people, paddies, pagodas, landscapes and history of this fabled land.

Return fares from Heathrow to Hanoi start at £581..

British passport holders can travel to Vietnam for up to 15 days without a visa until 30 June (vietnamembassy.org.uk).