German authorities in the state of North Rhine-Westphalia have reimposed lockdown restrictions in two districts after a spike in cases.

One area is home to a meatpacking plant where more than 1,500 workers have tested positive.

State premier Armin Laschet said the “preventative measures” in Gütersloh district, where about 360,000 people live, would last until 30 June.

The state’s health minister, Karl-Josef Laumann, announced the second lockdown just hours after the first, saying further measures were needed “in order to protect the population”.

It is the first time lockdowns have been reintroduced in Germany since the country began lifting nationwide restrictions in May.

Germany has been praised for its overall response to the pandemic, but there are fears infections are rising again.

Mr Laschet described the outbreak linked to the Tönnies meatpacking plant, south-west of the city of Gütersloh, as the “biggest infection incident” in the country.

“We have decided that further measures are necessary,” he told reporters on Tuesday morning.

People are not barred from leaving the area, but the premier appealed for local residents “not to travel to other districts”.

Bars, museums, cinemas and gyms must all close, and restaurants can only serve meals to take away. Stricter social distancing measures are back in force, meaning people can only meet one person from outside their own household in public. Schools and nurseries for 50,000 children have been closed.

There is also a mandatory quarantine in place for all employees of the affected plant. Three police units have been deployed to enforce the measures, accompanied by aid workers.

Authorities have put up metal fencing around residential buildings where workers live and are distributing food to more than 7,000 employees, many of whom are migrants.

Mr Laschet said it was important that the workers in quarantine were treated humanely. Only 24 residents of the district who do not work at the plant have so far tested positive for the virus, he added.

Bulgarian, Polish and Romanian consular staff have all visited the region and translators are on hand to speak to foreign workers at the plant.

Mr Laschet criticised the Tönnies Group on Tuesday for their response, telling reporters their willingness to co-operate “could have been greater”.

All operations at the site were suspended last Wednesday. A spokesman for the Tönnies Group apologised for the outbreak. 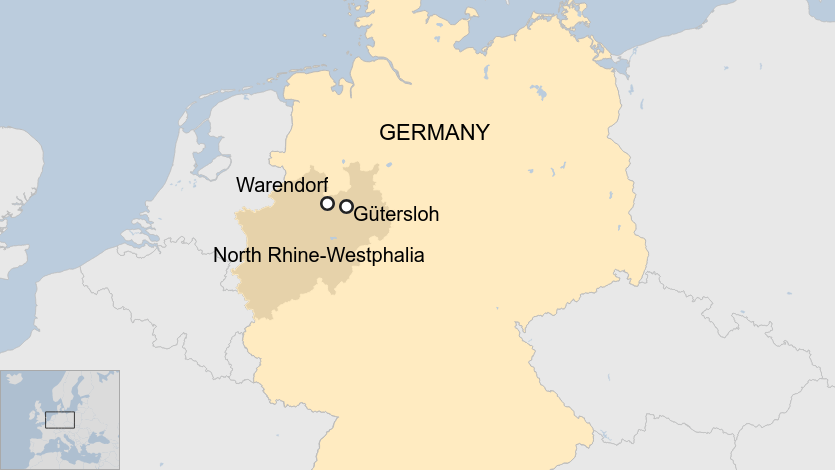 Social distancing rules have been tightened and schools and nurseries will close their doors from Thursday.

Local authorities in Germany have the power to enforce different measures in their areas. Regulations differ from region to region.

This is not the only localised outbreak in the country. A tower block has been placed under quarantine in the central German city of Göttingen, and police were sent to maintain order on Saturday after residents tried to get out.

Officials said those inside attacked officers with fireworks, bottles and metal bars. Most though have been complying with the quarantine.

And other European countries are also seeing small outbreaks. On Monday the north-eastern Spanish region of Aragón reimposed stricter lockdown measures on about 68,000 residents of Huesca province.

Health minister Salvador Illa said officials were closely monitoring the situation and said it was “on its way to being under control”.

What’s the overall situation in Germany?

Lothar Wieler, head of the nation’s public health body – the Robert Koch Institute (RKI), told reporters on Tuesday the country was at risk of a second wave of infections but said he was optimistic they could prevent it.

Currently the reproduction rate, or R-number – which indicates how many people one infected person will on average pass the virus on to – in Germany is estimated at 2.76.

The R number must be below one for infection rates to fall but authorities have stressed that outbreaks pushing up R remain localised.