A 19-year-old woman has died in a fire at a flat in Castlewellan in County Down.

The blaze broke out in the bedroom of the property in Lower Square at about 04:00 GMT on Saturday.

Despite efforts by the ambulance service to revive her, she died at the scene.

The woman has been named locally as Ellen Finnegan. She lived in the flat above her father’s butcher’s shop.

It is understood Saturday was the third anniversary of her mother’s death.

Twenty-two firefighters worked to bring the blaze under control.

Fire service group commander Max Joyce said it is not yet clear what caused the fire.

“Essentially the blaze itself was contained to a bedroom just over the butcher’s and there was a fair bit of heat coming off it. 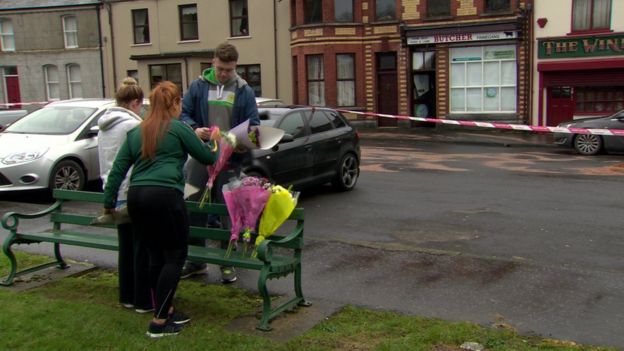 Friends of Ms Finnegan lay flowers at the scene

He appealed for anyone who does not have a smoke alarm in their home to get one as soon as possible.

The MP for the area, Margaret Ritchie said: “This tragedy will have a profound impact on the entire community.

“It is difficult for most of us to contemplate the grief that is now being felt by this young woman’s family and friends, but on behalf of myself and all the people of south Down I would like to extend our deepest condolences to them at this most difficult time.”

Sinn Féin’s Chris Hazzard sais it was a heart-breaking tragedy for Ellen’s family and friends.

“Ellen comes from a well-known and well established family in the local community. Her father Bartley runs a longstanding family butchers in the town,” he said.

“I extend my heartfelt condolences and those of my party to Ellen’s family and friends at this tragic time.”

The fire started in a bedroom of the flat

In this article:Castlewellan, flat fire