It is time to “blow away” all the “nonsense” that prevents police from properly pursuing extremist suspects, London Mayor Boris Johnson has said.

In a BBC interview, Mr Johnson was asked about Londoner Siddhartha Dhar, who is thought to have fronted a so-called Islamic State propaganda video after fleeing the UK while on bail.

I’m not saying ‘stuff their human rights’ because that’s not the way we do things in this country. But let’s be pretty robust in our approach

The UK’s security authorities have faced mounting questions over how Mr Dhar was able to leave the UK in 2014 while on police bail, one of the conditions of which was handing over his passport.

Muslim convert Mr Dhar, also known as Abu Rumaysah, had been arrested on suspicion of encouraging terrorism, but later travelled to Syria.

“Under the law, they have various restrictions under human rights as to what they can actually do.

“And the police are constantly monitored by very, very uppity lawyers… who are drawn to vindicate the rights of their clients.”

He pointed out that 750 British nationals had gone to Syrian territories of Islamic State – which the government refers to as Daesh.

“When you’ve got somebody like this who’s a member of… whatever organisation, and we’ve seen what’s happening in the Daesh territories in Syria, let’s not monkey around, let’s make sure we follow them,” he added.

“I’m not saying ‘stuff their human rights’ because that’s not the way we do things in this country. But let’s be pretty robust in our approach.” 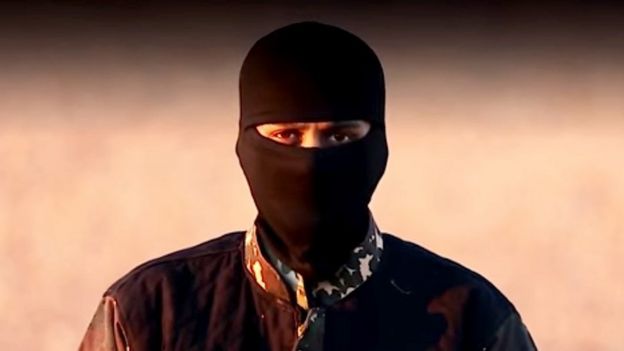 A still from the latest IS propaganda video

Earlier this week, official sources told the BBC that Mr Dhar, from Walthamstow in east London, was the focus of investigations into the video, which purported to show the killing of five men.

IS has said the men had been spying for the UK.

IS seized large swathes of territory in Syria and Iraq in 2014, when it formally declared the establishment of a “caliphate” – a state governed in accordance with Islamic law, or Sharia.

IS has previously released propaganda videos of killings, including footage showing the apparent beheading of two US journalists, James Foley and Steven Sotloff, and two British aid workers, David Haines and Alan Henning.